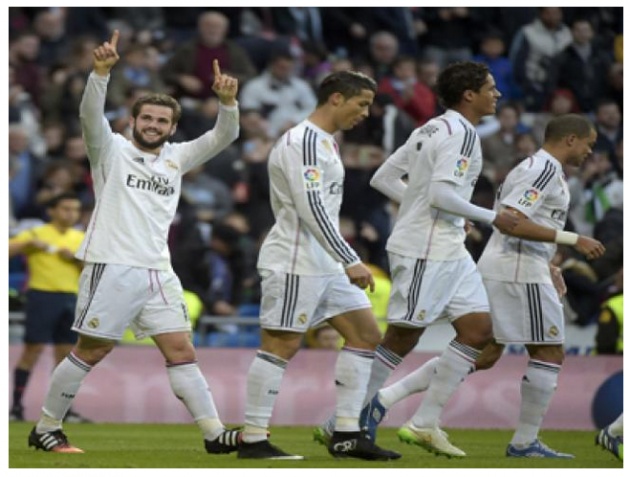 Real Madrid returned to winning ways with a 3-0 win over Espanyol on Saturday, despite playing most of the second-half with 10 men, to move four points clear at the top of La Liga.

Cristiano Ronaldo was restored to the starting line-up after being rested in a 2-0 Cup defeat to Atletico Madrid in midweek and he set up James Rodriguez to open the scoring 12 minutes in.

Gareth Bale then doubled the hosts advantage with a sumptuous free-kick, but their route to a comfortable three points was complicated when Fabio Coentrao was sent-off eight minutes into the second period.

Espanyol, though, failed to make their man advantage count as Nacho added a third 14 minutes from time to put the pressure on Madrid's title rivals Barcelona and Atletico, who face each other at the Camp Nou on Sunday.

"It made the game more complicated for us, but thankfully the team was in a good state mentally."

Ancelotti made four changes in all from the side that slipped to a 2-0 defeat at the Vicente Calderon on Wednesday and there was never any danger of the European champions starting 2015 with three defeats on the spin as they dominated from start to finish.

Karim Benzema was unfortunate not to open the scoring when he smashed a loose ball off the outside of the post on 10 minutes, but the hosts had to wait just two minutes more for the opener thanks to a lovely team move.

Bale switched the play from right to left to pick out Ronaldo and he cut the ball back perfectly for the late arriving Rodriguez to slot home his 10th goal of the season.

Bale then responded in fine style to the criticism of his performances in Madrid's defeats to Valencia and Atletico in the past week with a brilliant dipping free-kick that went in off the inside of the post.

The Welshman could have added to his tally with a free header from close range that flew beyond the far post.

However, a stroll towards victory became more complicated for Ancelotti's men eight minutes into the second half when Coentrao was shown a straight red card for flying into a challenge with Jose Canas with his studs showing.

Ronaldo was booked for taking his protests towards referee David Fernandez Borbalan too far in the aftermath, but the incident seemed to fire up the Portuguese as he sprang into life.

The World Player of the Year smashed a low effort just wide and then had another shot blocked at the end of a lightning fast counter-attack involving Bale and Benzema.

Bale was then whistled by some of the home support when he missed a huge chance to seal the three points afer sprinting beyond the Espanyol backline with Ronaldo waiting to tap into an empty net.

However, all was forgiven moments later when Alvaro Arbeloa's cross found substitute Nacho free at the back post to slam home his first goal for the club.

Success Is The Consequence Of Planning

Let just begin the topic with quote I read in the school text book. In preparing for battle I have …