10 Most Haunted Places in New England 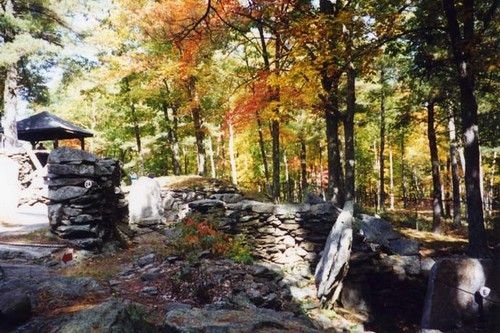 New England is a small area compared to the rest of the Unites States, but it is rich with history and culture. From the Native American tribes to the Revolutionary War, the area provides a great learning experience. But besides the history, the area is filled with many ghostly locations. Here are ten haunted places in New England.

Throughout the area one can find some interesting tourist spots. This roadside oddity in Salem, New Hampshire consist of 30 acres of stone structures and large rock formations that is claimed to go back 4000 years. While who built these structures and why remain a subject of debate, the area is said to be home to shape shifting ghosts. Many claimed that some of the rocks in the area will transform into spirits of Native Americans and other people.

From music to speeches, the Sterling Opera House in Derby, Connecticut hosted various class acts such as the likes of Bob Hope, Amelia Earhart, and Harry Houdini. Built in 1889, the building currently showcases an array of ghosts, with one ghost being a a young boy named Andy. This particular spirits likes to move items, such as a ball, around the stage area. In 2011, the location was featured on the television show Ghost Hunters.

www.ohanaware.com/hdrtist/" width="500" height="333" data-lazy-src="http://www.wonderslist.com/wp-content/uploads/2015/03/Most-Precious-Blood-Cemetery_fa_rszd.jpg" />
Cemeteries are claimed to be a hotbed of ghosts. Located in Hollis, New Hampshire, the cemetery’s actually name is Pine Hill. It earned the name of “Blood Cemetery” not for any creepy reason but for the prominent family that is buried here. Many ghosts are claimed to reside here. Numerous paranormal researchers have visited this location and have captured voices on recordings and strange anomalies in pictures.

Colonial America survives well in New England, both in terms of architecture and the spirits that still roam. Built around 1740’s by Francis Brayton, the house is now a museum and historical society in Coventry, Rhode Island. One of the most active spirits is that of a young girl. Investigations conducted here have captured EVPs and strangle occurrences on video, such as a rocking chair moving by itself.

Abandon places can be creepy, and this old prison camp is no exception. It was built in 1903 but closed in 1934 with only a few structures still standing, like the root cellar and solitary confinement. A nighttime visit here can be very spooky, filled with odd noises and moving shadows. One ghost is said to be the wife of a former warden that is seen wondering near the ruins of the warden house.

Higher education can expand your mind, but also give you a fright. Vermont College of Fine Arts in Montpelier started as a seminary in 1831 before becoming a college in 1941. The most haunted location on campus is College Hall, which is said to be haunted by a girl who may have been murdered there. She has a habit of playing the pipe organ in the chapel area.

There are many haunted bed & breakfast establishments in the USA, and this one in Preston, Connecticut is no exception. Named after Captain William Grant, who lived here with his wife Mercy, the inn is said to have many spirits. The Adelaide room is believed to be the most active, with keys being moved and footsteps being heard. The location has been featured on the paranormal show, Psychic Kids.

Ghost Hunters, Ghost Adventures, and My Ghost Stories have all featured this 1875 mansion located in Gardner, Massachusetts. It was once the crown jewel for millionaire SK Pierce, but time has taken its toll on the location. Many spirits is said to haunt the mansion, some friendly and others no so much. Children have been seen running around and furniture on the tops floors has moved. The activity has become so bad that the current owners no longer live there.

On August 4, 1892, this house in Fall River, Massachusetts was the site of two brutal murders of Abby and Andrew Borden that captivated the nation. Andrew’s daughter, Lizzie, was charged but later acquitted of the murders. Now, her home is a bed & breakfast and is New England’s most famous haunted spot. Guest have reported seeing a woman standing at the edge of their bed and others have been have touched. It has been featured on many television shows, and has become a must-see place for ghost seekers.

Horror Films are unsettling films designed to frighten and panic, cause dread and alarm, and to invo…

Its scary Night, the moon is full and shining, it fills me with delight. Its clear that I find scary…

At the point when the producers began two movies back, the Scary Movies were interesting. From that …

Deadened. Pointless. Inert. Compulsory. Those are a couple of the modifiers that can be utilized to …