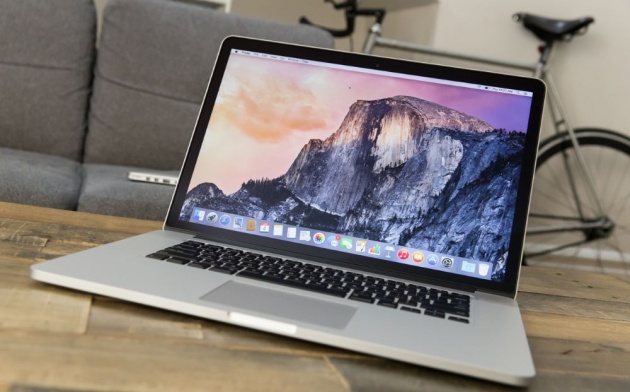 Apple released a brand new version of the 15-inch MacBook Pro with Retina Display just a few weeks prior to its big annual Worldwide Developers Conference, and we took it for a spin.

The updated machine gets super fast flash storage, as well as the new Force Touch trackpad, an improved dedicated GPU and an extra hour of battery life. It didn’t get new processors, but in practice, it’s still a worthwhile upgrade for those who need the might and screen real estate of a larger laptop.

The Retina MacBook Pro is, at this stage, a true design classic. When it first debuted, it was a marvel of engineering in terms of Apple’s ability to fit a machine with professional caliber specs into a package that is remarkably portable; three years later, the industrial design of the product is emblematic of craft, if somewhat easier to take for granted since it’s been around for some time.

As Apple’s largest current laptop, the 15-inch Retina MBP isn’t going to work for everyone – it’s also the heaviest at just under four and a half pounds. The trade-offs of size and weight for exceptional display quality, plus ample screen real estate, as well as long-lasting battery life and improved graphical power vs. other models are easy pills to swallow for people who need those features, however.

This computer remains my favorite road warrior in terms of actually getting stuff done; the larger footprint isn’t optimal for things like working on an airplane, where larger passengers like me, combined with people who recline their seats (ban reclining seats by the way) can equal preciously little room for opening the lid of a larger laptop. But when you install yourself at a desk wherever you happen to land, you’ll value the extra screen space, especially if you work in a creative field or coding capacity.

The new 15-inch rMBP has some powers that its predecessor didn’t, chief among which in terms of immediately apparent differences is the addition of the Force Touch trackpad. Apple’s Force Touch tech allows for new types of input, based on how hard you press with your finger. In OS X, this means you can do things like look up addresses in Maps on websites in Safari, or check dictionary definitions of words, or even preview links to other pages on the web.

Force Touch is also open to developers, which means you can do things like add pressure sensitive drawing  capabilities to Photoshop using only the trackpad and a standard stylus. But the big advantage here is that it makes it possible to use pressure to determine the speed of scrubbing when navigating through video and audio content. This can be a huge boon when you’re going through clips while doing things like putting together video content or audio podcasts and need to find specific parts in a number of different media files.

I’m a huge fan of Force Touch, and the new ‘taptic’ feedback virtual click (which to me, is indistinguishable from a physical one), and their presence on this machine is appreciated. As with other Apple notebooks sporting Force Touch trackpads, however, there will be an adjustment period if you’re coming from an older mechanical click design. The advantages, which include the ability to click everywhere (including at the very edges of the trackpad), make it more than worthwhile to take the few hours to a day you might need to adjust.

Another new feature is limited to the top-end model, which we reviewed here: Thanks to its beefed up GPU, it can now power an external 5K display at 60Hz via two DisplayPort cables. This would be a lot more generally useful if Apple offered a 5K display of its own, or made target display mode possible on the 5K iMac, but it’s still a nice-to-have feature for use with third-party options likeDell’s for the future-oriented pros who need it.

Better performance on the new 15-inch Retina MacBook Pro comes primarily from that new PCIe-based flash storage which is also on the new 13-inch model. It speeds things up considerably – it boosts performance by up to 22 times when compared to a 5400 RPM HD, or up to twice the speed of the previous version’s flash-based storage options.

This is a huge upgrade for anyone who spends any considerable amount of time reading and writing from storage, as when you’re editing video or larger photo libraries in apps like Lightroom. It’s hard to quantify it properly, but know that in actual use, you’re going to find everything noticeably faster and more responsive, which goes a long way to easing the pain of intensive rich media projects.

That new graphics processor also helps considerably. The AMD Radeon R9370X offers up to 80 percent faster performance vs. the previous model with discrete graphics, when running Final Cut Pro X. Again, it’s a noticeable upgrade, and worthwhile for anyone who spends a lot of time doing graphics intensive tasks like this.

Apple has also managed to eke out some extra battery life here, owing to tweaks in system and component energy efficiency, and the result is worth an hour more time when you’re doing lighter work like browsing the web or just watching iTunes movies stored locally. It’s enough in practice that it does in fact increase piece of mind, lessening the specter of “range anxiety” and your aching need for an outlet enough to make the new Retina MacBook Pro more of a true all-day machine, especially when you’re not pushing it to its limit.

This latest new MacBook line update from Apple isn’t the most dramatic change for its notebooks, but it is one that pushes the needle in non-trivial ways among key areas like battery life and general performance speed. Intel’s delays mean that it’s still running an older processor generation, but that’s not a difference that will be noticed by people actively using the laptop in their day-to-day work.

Main factors to consider if you’re looking to upgrade are how much you need a new machine, and what you want out of it; this is a good update for anyone with anything older than last year’s version of the same computer, or those with less powerful machines eager for more combined with a larger display. The Force Touch trackpad support should bear more fruit for future applications (and possibly OS X 10.11), and it’s still the uncontested mobile productivity king for creative pros.