The New York Open Judo Championships, held at the City House annually for over 25 years, marked a milestone this year.  It had always been a men only tournament but, for the first time, there was also a women's team event, and what an extraordinary event it was.

The men's division saw teams from Germany, France (last year's winner), Poland and the U.S. competing, but the women's event was something special:  For the first time since the 1950s (other than at the Olympics), Cuba sent a team to compete in the U.S.  And they sent their very best.  Cuba's five person team boasted three Olympians, including two Silver Medalists, and was coached by the legendary Ronaldo Veitia, who has coached more individual Olympic and World medalists than any other coach, in any sport, in history. The third team to send women to this first ever event was France and they, too, sent their best: national medalists, European champions, and one World and Olympic champion.  America responded with a powerhouse team of its own and four of the five players are among the NYAC's elite athletes:  Katelyn Bouyssou represented us in the World Championships, Hana Carmichael is the current National Champion and Pan Am Silver Medalist, and then there's Marti Malloy, current Olympic and World Bronze medalist, and, finally, Kayla Harrison, the current Olympic Champion and 2010 World Champion.  The competition promised to be the best Judo seen in North America, outside of the Olympic Games. 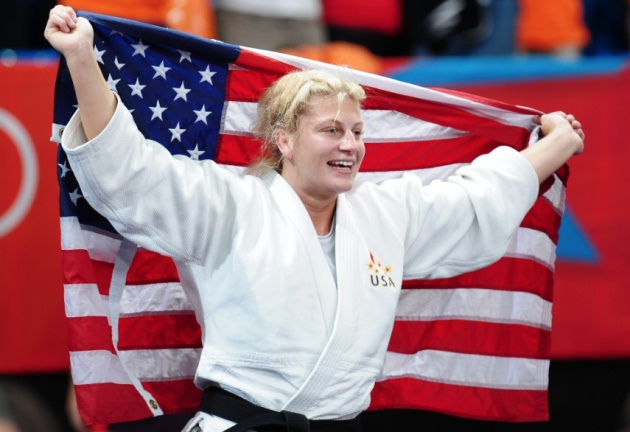 The men's event came down to the teams that had won the last several NY Opens: France and Germany.  In the preliminary rounds, Germany eked out a victory against France but then France, coming up through the loser's pool, defeated both the young US team and the Polish team to face Germany in the finals, where the tournament's outstanding men's competitor, Massimino Vincent, triumphed in the deciding match to give France the victory.

Then came the women.  Both Cuba, sporting pink and white Judo uniforms, and the US, wearing red and blue (with the NYAC logo displayed prominently) dispatched the French team, though Clarisse Agbegnenou, the current 63 kg World Champion, turned in a stellar performance for France. That set the stage for the two powerhouses to meet in the finals. A total of 5 of the 10 competitors were Olympic and/or World medalists, so this promised to be epic. And it was:  Katelyn Bouyssou, even in losing, turned in an extraordinary performance. She was caught early for a decisive score but then spent the rest of the match beating the Cuban practically to death, forcing her to her knees on so many occasions that she was close to disqualification for non-combativity as time ran out.  1-0 Cuba. Then our second player, Angela Delgado, took a walk over win when Olympic Silver Medalist Yanet Acosta, injured in her match against France, couldn't compete.  Cuba 1 - U.S. 1.  Next up, the NYAC's Marti Malloy, and she turned in another outstanding performance, forcing an arm bar submission (her second of the event) on her opponent Aliuska Ojeda, half way through the allotted time.  2-1 U.S.  Next up, the AC's Hana Carmichael, current US National Champion and Pan American Silver Medalist. Hana fought hard, but ultimately lost to Olga Masferrer, who caught her near the match's end. 2-2 tie, going into the final match: the AC's Kayla Harrison, versus Cuba's Olympic Silver Medalist and Pan American Gold Medalist Yalennis Castillo. Put simply, Yalennis never had a chance.  Kayla, coming off the match against Lucie Perrot of France, in which she scored what was likely the hardest throw of the tournament (men or women), dominated the match, winning half way through with an arm bar.  Final score: 3-2 USA. 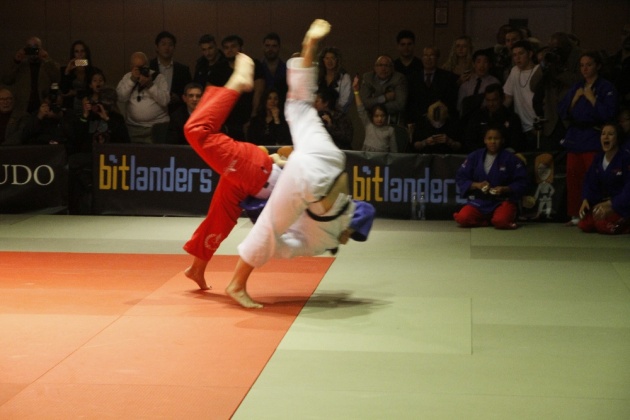 After the match, we talked with Kayla.  She told us that, although this tournament doesn't earn her any points towards making a world or Olympic team, although it breaks her rigorous training routine, although she runs the risk of being injured, it doesn't matter; she's coming to the NYAC's event.  Everywhere she goes now, whether at a competition or a training camp, she's a target: she's the reigning Olympic champion and she's an American.  But here, at the NYAC, she's among friends. She doesn't have to be on the defensive; she can sit and chat with spectators and knows, as she repeated several times, that she's home.

Finally, the Judo Chairman, Kevin Earls, was celebrated for his over two decades of tireless devotion to the sport and, especially, its athletes. Before the finals, NYAC Hall of Fame member and two time Olympic medalist Jimmy Pedro recognized Kevin's achievements and contributions, recounting his experiences with the Club, listing some of the many, many athletes Kevin's efforts have helped, and ending with how, 9 years ago, Jimmy talked to Kevin about a young woman athlete with talent, but no financial ability to realize her potential, whether with respect to traveling to events or even to working with a competent coach.  Relying on Jimmy's recommendation and his own instincts, Kevin agreed to sponsor the young woman, who grew to be Kayla Harrison.

The event was followed by a banquet on the twelfth floor where all players and coaches were invited to join in a post match celebration that included good food and drink, along with a talent contest in which each of the teams was invited up to sing some of their favorite songs.  The Cuban women won, but it was universally conceded that it might be unwise for any of the competitors to forgo their Judo careers for the stage.

The event was more than sold out, as staff had to turn away over 100 would-be spectators.  Was it the women?  Was it Cuba?  Could it have been the chance to see, close up, some of the best competitors in their sport in the world?  The fact that this is the best Judo at the best run tournament in the U.S.?  It doesn't really matter.

Credit should also be given to the tournament committee of Mel Appelbaum, Arthur Canario and John Walla.  Dr. Appelbaum in particular spends a considerable portion of the year before the tournament contacting foreign teams, arranging for visas, checking flights, confirming housing accommodations, arranging for International Judo Federation "A" level certified referees, checking the facility to be certain it meets international standards, contacting sponsors and performing all the other tasks that make the tournament run, seemingly, effortlessly.  It's a job for which other organizations devote a staff; the NYAC has Mel.