I'm eager to share what I've researched on the internet regarding these 4 uncanny fuels for fire besides your regular twigs and log. As I mentioned in my previous article, tinder is as crucial as having a means to start a fire. Without good tinder or kindling or fuel to keep the flame going, making fire would be a useless feat. But first off, I need to differentiate between the three. Here are their meanings according to Dictionary.com:

any dry substance that readily takes fire from a spark. 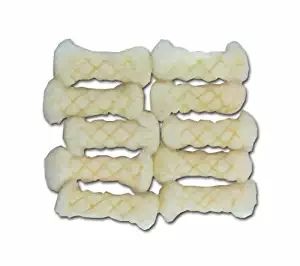 10 pieces of Tinderquik from amazon.com

material that can be readily ignited, used in starting a fire. 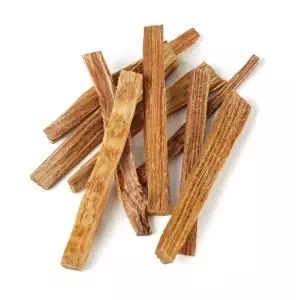 combustible matter used to maintain fire, as coal, wood, oil, or gas, in order to create heat or power. 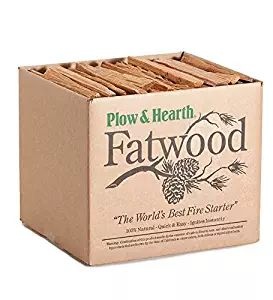 So basically when you start a fire, you first need tinder to catch a spark for it to produce flame, then thin strips of dry material (that is kindling), then a big chunk of material that is fuel. So for example, when you try to light a match, you need a Tinderquik as tinder, then you place it near some twig shavings as kindling, then transfer the kindling to a big dry log as fuel. But sometimes, these three can be just one material. Some materials, like twigs and shavings, just come from one source material and that is a tree. For convenience purposes, I'll try to include in this list flammables that can make-do without one (tinder) or the other (kindling). 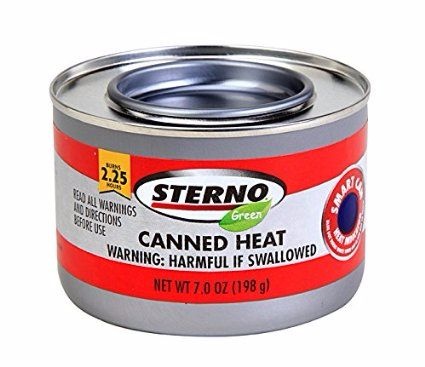 Just like our science experiments back in school, we make use of the alcohol lamp. It's basically a jar with a wick connected to the screw-cap lid. The concept is simple like a kerosene lamp, but instead of kerosene, the fuel used is an almost-pure alcohol. It is a safe equipment to use especially in the laboratory because the flame only reaches at a certain height (about 2 inches).

Now here comes the interesting part: did you know that you can condense alcohol to have more of it in less space? That's how the Sterno Alcohol Stove works. When you open a can of this stove, you will see a pinkish gel-like substance that is basically a combination of water, ethanol and methanol. That is your fuel, and you do not need a tinder nor kindling for it to work.

The canister can act as an actual stove where you sit a cooking pot in so you don't have to carry a separate stove for you to cook on. It's convenient to bring and it is spill proof. The best part about the Sterno Alcohol Stove is that one canister can burn for about two and a quarter hours! That's enough to boil water and cook instant noodles or whatnot when you're outdoors for a couple of days.

It's eco-friendly and is made of biodegradable materials so if you're a tree-hugger this is your best bet. It also doesn't emit enviromental toxins though you should keep it out of reach of children because it is toxic to humans when eaten.

The Sterno Alcohol Stove can get hot easily so if you're not careful and not reading the instructions, you will get burned. The flame is also not visible to the unaided eye though there is an indicator at the cover of the canister that will change color if the can is hot or not. Alcohol for fuel does have this characteristic of having a small flame, though it doesn't lag on performance. But then again, you might find it hard to use if you can't see the fire at all.

You also need long matches or a specialized stove lighter--you know, the one with the long rod?-- because you will reach inside the can to light it up. Have that or get burned (kidding).

You will shell out if you choose this thing to boil your water and cook your food alone. You will need another fuel for your fire to keep warm as this is only intended for cooking.

The next on our list is not as uncanny as it may sound, but it is strange to use in the wilderness. I mean, who carries around a quart of cooking oil just for fuel? It's uneconomical because it's heavy and it takes up space. But here I go again with the survival situation whachamacalit: everyone has one in their kitchen so when you feel you need to be resourceful, turn to this thing. There are youtube videos where people show you that you can keep the fire going with only just an orange peel and an olive oil.

Basically, any oil is flammable to a certain degree because of the vapor they release (which is the key to firing it up). Nuff, said.

Availability. You can buy it almost everywhere, even in the wet market (and in my country, there's this so-called sari-sari store that functions as a convenience store without the hefty price, the cash register and the air conditioning). There's this thing called lamp oil but it's harder to find (how many hardware stores vs how many convenience stores are in your area). Any oil would do (err, more or less).

Great as night light as it burns up pretty long, longer than your average candle and has a stable light. A 2-liter oil can burn for up to a week!

It's easy to make. You can make one with a beer bottle and a cotton thread. 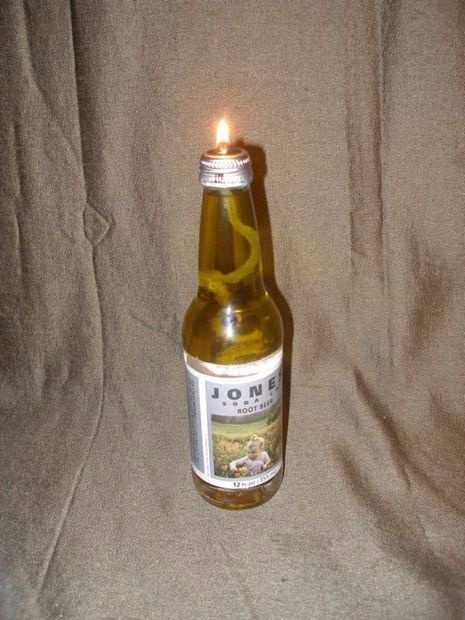 Photo credit to Aira.vj from instructables.com

Only good as a night light and not to keep you warm. If you're desperate enough, you can cook meals using this fuel but I doubt of it's efficiency.

It needs a vessel for it to work and a dependable cotton wick.

I included it in this list because of its uncanniness to use and from seeing crazyrussianhacker's youtube video with his experiment on orange peels and cooking oil. 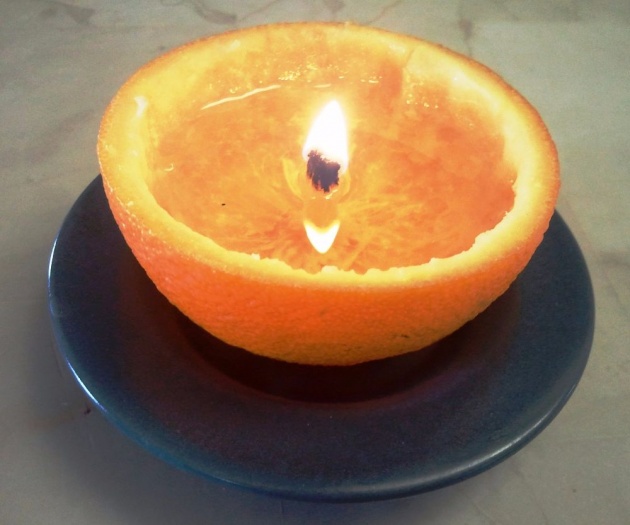 Photo credit to DualPhase from instructables.com 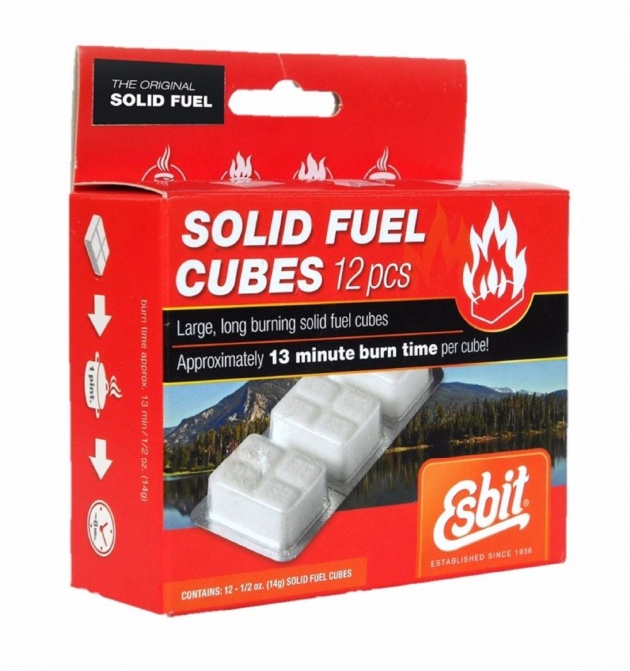 This one really amazes me, up to now. A fuel tablet the size of an ice cube? That's awesome for me. What's more awesome is that there are stoves intended for this type of fuel, and the tabs and the stove are both compact. What's in it, though?

Hexamine, which is a combination of formaldehyde (formalin, yes the embalming agent) and ammonia. Others have Trioxane though it isn't manufactured by Esbit. When formalin and ammonia collide they are highly flammable. That's how the Esbit Fuel Tablets works.

Esbit Fuel Tablets are used by many campers and military men because it doesn't leave traces of ash and smoke (it's smoke-free when lit up). It's also easy to carry around as it is light and can be stored inside its specialized stove. 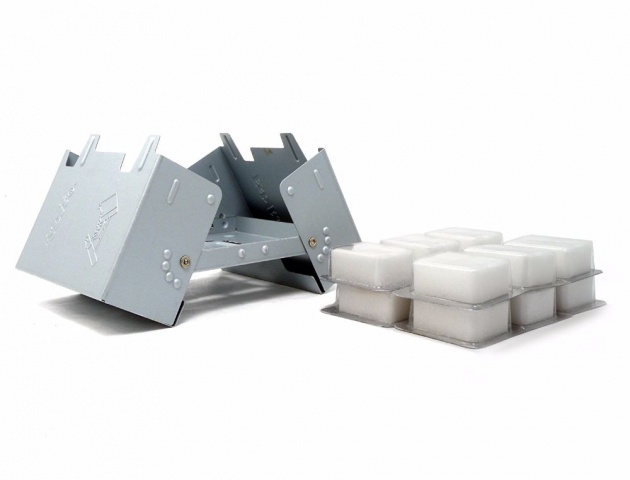 It produces big flame and it is weather-proof.

It doesn't have a shelf-life if stored in a dry container.

Doesn't need to tinder not kindling to work. You can directly flame up a fuel tab.

They are a bit expensive than other fire fuels. They are also not as readily available as alcohol or oil.

One fuel tab can only light up as long as 20 minutes (though it's enough for boiling a liter of water). So if you're on a 3-day camping trip, you need about 12 of these, plus extra. 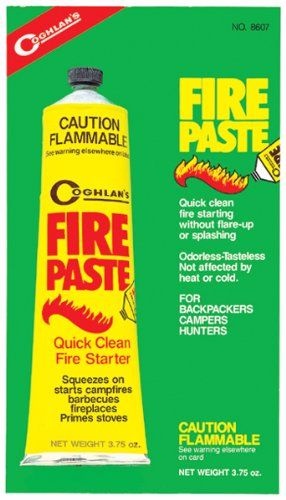 Last on this list is the Coghlan's Fire Paste. When I've known this via internet I felt intrigued. This stuff is not a fuel actually, but it acts more like a supplement for tinder or kindling. And because it is paste, you spread it onto a flammable material which is usually a big log. I've included this on this list because although it is like tinder, you can also use it on its own. You can also paste it onto your tinder to successfully light up a fire. It sustains fire really well, but you need a handful for you to work it like a fuel.

It's made up of Aliphatic Hydrocarbon, Denatured Ethyl Alcohol, and Organophilic Clay. Sounds like a chemical reaction is taking place for it to produce flame.

It's a bit cheap because the whole tube is big and would last you for quite a while. It is also odorless and doesn't produce smoke. When you use it on charcoal for grilling, you won't get a distinct taste in your food.

It aids your fire-starting materials when they are damp or wet. It can also work in extreme weather conditions.

It burns pretty well and with a coin-sized dollop, longer than a cotton ball soaked in petroleum jelly.

Video credit to BCkayakcamper from youtube.com

It's only a catalyst for you to start a fire on. Though it is an uncanny fuel to use, you won't wholeheartedly trust the Coghlan's Fire Paste to do this part.

Disclaimer: P/V not mine. Writeup 0% plagiarized except properly quoted from dictionary.com.

5 Ways to Make Fire Photo credit to Stonesfrom pixabay.com Fire is essential in a survival situatio…

Edibles (Food) Used for Cleaning Photo credit to Takenof Pixabay.com There are harsh chemicals in yo…