Everyone knows John Cena, right? well, I guess. Arguably the biggest entertainer in World Wrestling Entertainment`s (WWE) history. He has sold WWE`s merchandise to the fans than anybody else. This automatically gives him the power on the entire roster. This might become the reason why John Cena is on this list. Well, I am not portraying him as a bad guy or something like that but there were numerous times when he just wouldn`t allow particular wrestlers to put over. I would like to take an example of Alberto Del Rio`s downfall. Alberto when arrived at WWE, was portrayed as a rich, successful and a cocky winner guy. He had a big house, beautiful old classic cars and WWE Universe liked his cocky attitude. But, when he became the real deal and won WWE Championship in 2011, John Cena buried poor Alberto. He cut a promo on Alberto and said that he is just another dude who pretends to be rich and fooling others by driving rented cars to the ring. This automatically ended his rich guy persona which was built during these years and people started ignoring him. A gimmick which was meant to achieve future success went down tragically.

There is another instance when a second generation professional wrestler was buried by our beloved Cena. Ted Dibiase Jr. became the next victim of Cena when he decided to bury this young talent. Dibiase who was going to fight against Cena in a match was booked by the WWE bookers as a jobber. The talented Dibiase was buried on this night and all the expectations for his future WWE Championship runs were buried as well. With those two instances, I want to present in front of you those "5 Times When John Cena Buried Other Wrestlers".

The Miz has a long rivalry with John Cena. Miz has been portrayed as a heel character and has always been buried by babyface John. I guess Miz is the only guy in this list who has been mostly defeated by John in the big feud ending matches. He has been buried on the mic and he has jobbed to John in the ring as well. They faced each other on two separate occasions at WrestleMania and on both occasions, he was outshined by John Cena. I hope when they next time collide with each other, The Miz will be victorious.

Bray Wyatt`s gimmick was one of my best gimmick of all times. The way he walks, the way he talks during his promos are excellent. I still like his work on Raw though. But, let`s talk about that time when Bray was making a buzz in the WWE Universe. The Wyatt Family was in a feud with John Cena and you know rest of the story. Yes, all the family members were buried single-handedly by Cena. LMAO. John Cena turned the face of fear into the face of jokes. Cena mocked every single member of the Wyatt Family. When Bray collided with great John, he was literally vanquished as the face of fear.

Baron Corbin was doing so good in NXT and during his early run in the WWE. He became United States Champion and later he captured Money in the Bank briefcase. He was destined to become a future WWE Champion. WWE bookers were giving him a tremendous push during this time. But, as you know good things never lasts for long in WWE. Soon, Baron started a feud with Cena and you already now know what happens next. LOL, he was attempting to cash his Money in the Bank briefcase on Jinder Mahal. Cena interfered in the match, Jinder rolled down Baron and pick up the victory. Another future professional wrestler buried by John Cena. The End!

Another Money in the Bank briefcase tragedy happened with Damien Sandow. I really don`t know what`s John Cena`s grudge is with MITB briefcase holders. When Sandow won his MITB briefcase, WWE Universe was looking forward to a change. During this time Cena was the World Heavyweight Champion and was attacked by Damien Sandow. He got injured during this attack and it seemed like John will now be dethroned by Sandow. But even with one hand, Cena defeated Sandow. WOW! A proper bury of another professional wrestler by WWE bookers. 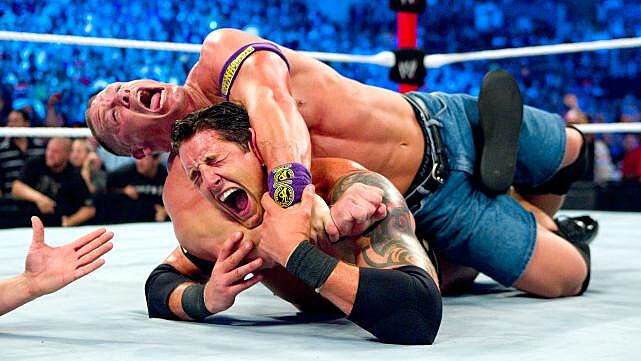 This one still hurts. Wade Barrett was the leader of a heel stable, The Nexus. I have already mentioned The Nexus on my other blog but they deserve another spot for this burial. The stable consists of 7 men who attacked WWE locker room and even chairman of the WWE. But, when they attacked John Cena it was written in the stars that they will all become a jobber to Cena. Cena as you now knows has superhero powers had buried all 7 men by his own. An end of a beautiful storyline by the poor booking by WWE bookers.

So, guys, this was the list. Hope you enjoyed reading this blog on professional wrestling. I will catch you soon with another blog. Meanwhile, don`t forget to check my other blogs -