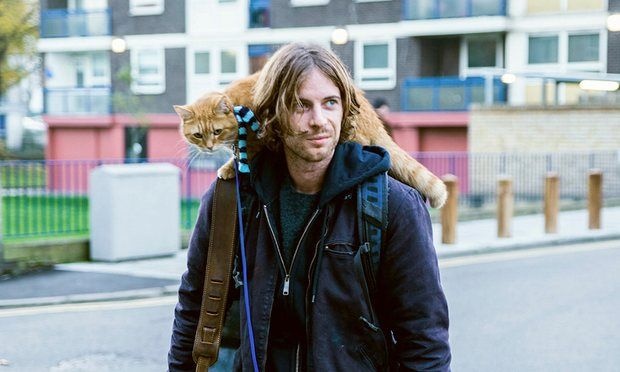 ‘I don’t take sides. I take the kitty litter out.’ This might be a line you would expect to hear in ‘A Street Cat Named Bob’, the first foray into British cinema in a decade from ‘Under Fire’ director Roger Spottiswoode.

Spottiswoode is a left-field choice to make a inspirational film about the real-life homeless busker, James Bowen (Luke Treadaway) whose life was transformed by the stray cat that wanders into his life and whose exploits were turned into a series of best-selling books, now a film, and no doubt a popular West End musical, outside whose theatre the next James Bowen would be playing. (‘I haven’t got that X Factor/Too busy with my Max Factor/No judges comments for me/I’d rather have a coffee – or tea/Leave others to their misery/I’ve made up my mind – and made up my face/I don’t need that X Factor.’)

My career as a lyricist on the other hand is very much on hold.

Bowen’s life wasn’t just transformed by Bob, the eponymous tabby cat. It was affected by three women in his life: his social worker (Joanne Froggatt), who secured him accommodation in a North London estate in exchange for sticking to his methadone programme; Belle (Ruta Gedmintas), the vegan neighbour with whom he forms a romantic attachment; and an old lady (Ruth Sheen) who idolises Bob. (‘I had a cat like that,’ she trills. ‘Are you sure he is not yours?’ I found myself asking.)

Britain is a country of cat owners and dog owners for one simple reason: we are lonely. In the absence of sustaining human relationships, we choose pets.

It is an interesting choice for companionship. Cats are noble and proud beasts that prey on small creatures (mice and birds) for sport and sustenance and have been taught over centuries of domestication to find the warmest spot in front of the fire in which to curl up.

As a young child denied the warmest place in front of the fire by a cat, you can probably guess where my sympathies lie.

A popular myth describes cats as having nine lives. This is an excuse that owners give for not providing adequate care for them during the day. (‘He went out through the window and could have been hit by a car.’ ‘Don’t worry, he’s got nine lives.’ ‘He could have been caught and turned into a meal.’ ‘That’s why I don’t order take out.’)

There have been plenty of films with cats in them: ‘The Cat from Outer Space’, ‘Cats and Dogs’, ‘The Truth about Cats and Dogs’ (misleading title), ‘Cat People’, ‘Catfish’ (very misleading title), ‘Cat on a Hot Tin Roof’ (who wants to be a metaphor?) They have nothing in common, except that they demonstrate that we can project anything onto a cat. They are inscrutable, unknowable, much like my credit rating.

Cats are the reason that psychiatrists charge high fees for listening to a patient whinge. For the same service, cats get food, board and unsolicited stroking. That has got to be worth at least £100 an hour.

Back to Bob the Street Cat. We don’t know why he crawled through James’ open window one day and then came back. Maybe he was looking for drugs. We can interpret Bob’s reasoning: he was like a concerned priest who took pity on the sad, lonely, confused James. One thing is for certain: he did not make the connection between guitar strings and cat gut.

When Bob follows James out busking – he’s not going to stay in that cold flat by himself – together they become an unexpected attraction in Covent Garden, a novelty act. How many mime artists do you see with cats around their necks? (‘I would wear one, but it interferes with the creative process.’) But with popularity comes unwanted attention – a dog urinates on James’ takings. In the ensuring fracas, James is banned from busking.

There are other problems. James takes Bob to meet the family of his estranged father (Anthony Head). How was he supposed to know that his half-sister was allergic to cats? He also has to keep a secret from Belle. Not that he hasn’t cleared copyright for the songs that he performs, rather than he is fighting a past heroin addiction. Belle’s brother was a drug addict and she saw him die. She doesn’t want to live through that again, no siree, Bob.

I said the film is inspiring and it is – honest. The magazine ‘The Big Issue’ helps James with his life after busking. We learn a lot about how the magazine works. It was conceived as a means by which homeless or no-income people in large cities can earn money with dignity, respect and a loud voice. But there are sanctions if you sell on someone else’s turf. Not quite as bad as those benefit sanctions featured in ‘I, Daniel Blake’ but have you seen food banks for cats?

The big finish isn’t quite in the tradition of great British romantic comedies. (I half-expected the exchange: ‘Your cat is peeing on you.’ ‘Really, I hadn’t noticed.’) Nevertheless, James breaks his dependency on methadone in a scene more suited to an adult-themed movie like ‘The French Connection’ or ‘Christiane F’ than a fluffy, family friendly yarn like this. Does he get the girl? That’s like asking whether Jeanne Moreau’s character can choose between ‘Jules et Jim’. At any rate, laughs are had, tears are shed (sort of) and we leave the cinema believing in cats as ministers for good and not for evil. Director Spottiswoode provides balance to his 1989 Tom Hanks-and-a-dog cop comedy ‘Turner and Hooch’.

But why do women wear cat-inspired shoes?