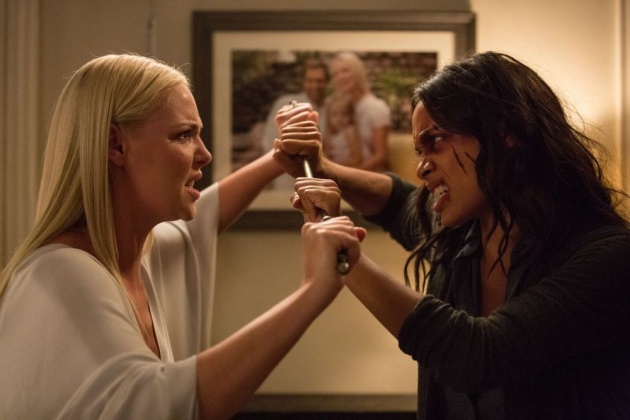 The critics have been unanimous: ‘oh, no – not another crazy ex movie’. I must admit I always think that when the latest X Men movie comes out - Kelsey Grammer as a mutant? Oh my! But Unforgettable, written by Christina Hodson and directed by Denise Di Novi, who took over the reins when Amma Asante (A United Kingdom) dropped out, is slightly more interesting than the initial notices suggest. This is a film about two abuse victims who go head-to-head, so the reviewers who sniff ‘but the women should be empowering’ have missed the point.

For a film directed by a woman, it has a surprising flaw: bad make-up. When we first meet Julia (Rosario Dawson) she is being interrogated by police who suspect her of murdering her ex, Michael Vargas (Simon Kassianides) who is lying in her kitchen with a knife through a vital organ - no, not his texting finger. She turns her head and we see fake-looking fresh blood and bruising (Caleb Deschanel’s cinematography is just a little too good). In any case, I know that the police want to get to the truth quickly and the first 24 to 72 hours since the discovery of a murder is the most costly part of any police investigation because of the overtime. However, surely they would apply petroleum jelly or an antibiotic ointment and then cover the wound with a sterilized bandage. I know what you’re thinking: they are the police, not a hospital. But if untreated under questioning, the victim could be left with scars that could in extreme cases prevent her from working. It is a lawsuit waiting to happen!

The police detective has 50 pages of Facebook correspondence between Julia and Michael. He is also in possession of her underwear. On the evidence as presented in a movie opening, it looks like Julia lured her abusive ex to her home to exact a horrible revenge - though her weapon of choice could have just as easily been a DVD of Enough starring Jennifer Lopez - mindless of the fact that she would be caught pretty quickly.

So the police can access your Facebook pages within 24 hours of a murder rap. Be very afraid.

Caption back: ‘six months earlier’. Why is it always six months? Why not five or seven? Julia is leaving her very successful post as an editor for an online publisher to move in with her fiancee, David Connover (Geoff Stults, a sort of David Boreanaz without charisma). David was a successful something on Wall Street who moved to California to start a micro-brewery, which is exactly the sort of venture you’d undertake in a community that is entirely car dependent. David has an adorable young daughter, Lily (Isabella Rice) and a controlling ex-wife, Tessa (Katherine Heigl) who lost custody because she had an affair. It was a barely an affair, she explains later.

The weird thing about the opening is that during the drive to California, Julia loses the box of stuff that she was taking from her employer. I mean, she is going to continue working from home. She is an online publisher. Why is there a box of papers that she allows to fall off the roof of her car? That’s a lawsuit waiting to happen. I suspect it is there to establish that she loses stuff.

The leaving cake is also possibly to blame. After all, her best pal (Whitney Cummings) tells her, ‘it’s the good stuff, not what we give to the interns’.  Exploiting interns with cut-price cake – how are we supposed to feel for these people?

Julia is introduced to Tessa early on when Tessa brings Lily home. Julia has brought a fantastic blanket from the flea market. ‘You mean it has fleas?’ says Lily in that cute but adorable way that writers imagine as child-speak? Tessa is disgusted. She doesn’t want something old on Lily’s bed unless it has had plastic surgery. Tessa moves to find Lily’s former blanket.

The women are squared off early when Tessa calls to drop something off for Lily. After some nudging, Julia invites her for dinner. Lily doesn’t take to Tessa’s spicy cooking, giving Tessa the chance to ask, ‘do you have something organic?’ 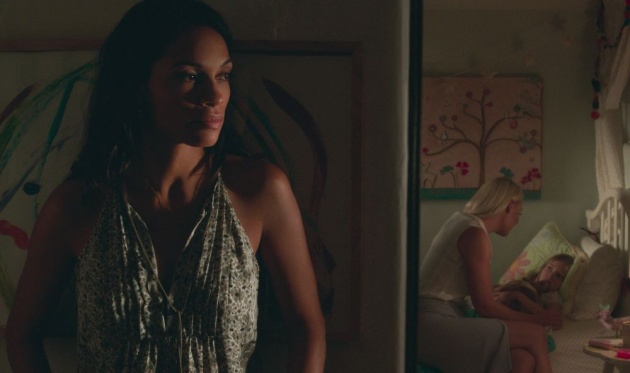 At no point does Tessa make a real effort to win David back. Rather her strategy is to discredit Julia, exploiting her prime weakness – she leaves her mobile phone lying around. Then she makes a discovery: Julia’s ex-partner, who was jailed for domestic abuse, is being released. The restraining order has expired. It too must be organic.

Stealing Julia’s personal information, Tessa creates a fake social media profile for her and then makes contact with Michael Vargas. Worse, she sneaks into the house and steals Julia’s engagement ring and David’s watch. Why David’s watch?

The pleasure of the film is in discovering how Tessa’s plan will play out. It includes such playbook scenes as losing a child at a farmer’s market. Julia keeps getting calls from caller ID withheld which leads me to wonder whether you can block such calls (there must be an app). Whilst Julia answers, Lily disappears.  Tessa finds her, complaining that Lily was talking to a strange man. When quizzed later, Lily asks, ‘what strange man?’ 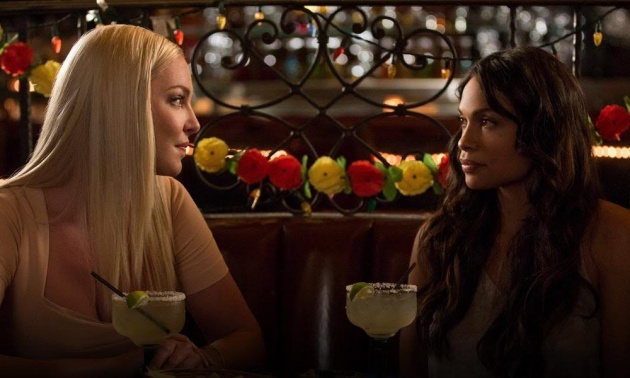 Photo: would you trust someone who does not lick the salt around a margarita glass? Katherine Heigl and Rosario Dawson in Unforgettable. Still courtesy of Warner Bros. Pictures

Tessa’s strategy includes inviting Julia for a liquid lunch - cue dissolve to empty margarita glasses - to explain that David is highly sexed with a voracious appetite for intercourse. So at a dinner for investors, Julia takes David into the ladies’ restroom to administer some tender loving care. This scene is intercut with Tessa online to Michael Vargas, arousing him with graphic descriptions. You half-expect Julia to be interrupted or Tessa to be affected by a bad internet connection. It happens to us all.

I mentioned that Tessa is the victim of abuse. We meet her hyper-controlling mother (Cheryl Ladd) who tries to maintain her youth without the aid of a sunhat. Grandma tries to inculcate her values into Lily by insisting, through Tessa, that she learns to ride. But Lily liked her pony. She isn’t ready for a horse. Julia comes to the rescue, taking Lily home but mother is not pleased. As a result, Tessa takes revenge on Lily with a pair of scissors.

The film builds to a confrontation between Julia and her ex. We discover the truth of what went down in her kitchen. We also discover that Tessa has a dark past and is a dab hand with tape.

Unforgettable offers few thrills but it does at least steer away from some of the worst excesses of the ‘crazy ex’ genre. OK, Tessa does pick up a young man at David’s start-up party, have sex with him in a car and leave him to walk home in the rain. For someone focused on organic food, she is surprisingly into one-time use. The film could have been schlocky – and more exploitative – if directed by a man. There is even less nudity here than in The Zookeeper’s Wife – and that’s a drama.

Di Novi encourages Dawson to find her inner-Halle Berry and Heigl to tune into her inner-Sharon Stone. It is a strange comeback movie from the star of Knocked Up, who bad-mouthed her co-star Seth Rogen and director Judd Apatow and then was held in low-regard by Hollywood. It is as if she is rebranding herself as a femme fatale. There is however something funny about her efforts, suggesting that comedy is her forte after all.

At no point is Julia held to account for not telling her husband that her ex is an abusive psycho. She didn’t even show him Mortal Thoughts as a conversation-starter. This doesn’t matter because there are some secrets that should be kept, like the formula to the Krabby Patty as featured in SpongeBob SquarePants. Besides, having a psycho in his extended family might put off David’s investors.

Unforgettable doesn’t have the suspenseful highs of a good thriller. Nor does it subvert conventions. It sails close to camp without putting up a tent. It may just about recoup its $12 million budget.