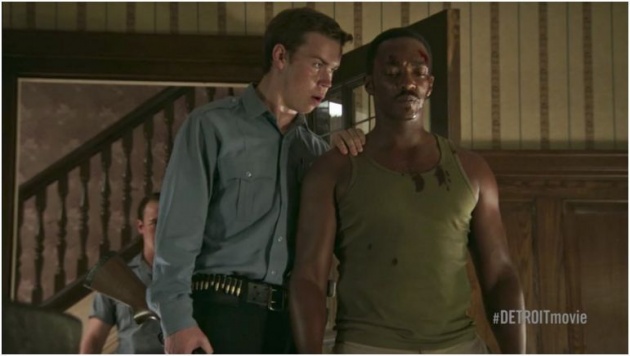 Not many people want to see a film about African Americans being beaten up and killed without reply. That’s my take-away from the poor box-office performance of Detroit, an exceptionally well-made, suitably angry film that has extremely limited appeal. It is taut. It is gripping. But where is the uplift? Where is the justice? Violence without justice is just pornography. Only shufflers in trench coats do pornography.

Detroit is a work of outrage from 65 year old director Kathryn Bigalow, the only woman to date to collect the Best Director Oscar – and that was a long time coming. Whilst other women her age might think about retirement, Bigalow has immersed herself in the events of July 1967, when a police operation, the raid of a ‘blind pig’ (illegal drinking) party led to five days of rioting. Bigalow and her estimable screenwriter Mark Boal – he’s Paul Laverty to her Ken Loach – reproduce an atmosphere of uncertain violence agitated by the local police. The nub of the film is the Algiers Motel Incident, which took place in the late hours of 25 July and the early hours of 26 July. The net result was the killing by police of three unarmed African-American young men: Carl Cooper aged 17; Fred Temple, aged 18; Aubrey Pollard, aged 19. Three police officers and a night watchman stood trial but got off. There was a book on the case, by Hiroshima author, John Hersey. There was outrage, but no justice.

Why has this story not been told as a motion picture before? Possibly because there are no heroes, no one who finally got to prosecute David Senak, Ronald August and Robert Paille, the three cops who were brought to trial. Bigalow and Boal find a hero: Melvin Dismukes, the night watchman, here played by The Force Awakens’ John Boyega. One of the other reasons is the cinema double jeopardy rule. Cinema (or TV movies) shouldn’t put cops on trial again for a crime for which they were acquitted. On the other hand, if it is OJ Simpson.

In the movie, David Senak is renamed Krauss and played by Brit Will Poulter (The Maze Runner, We’re The Millers). Ronald August is called Demens and played by Irishman Jack Reynor (What Richard Did). Robert Paille is renamed Flynn and played by Australian Ben O’Toole (Hacksaw Ridge). Bigalow didn’t cast any Americans to put a little distance between fact and fiction.

So the cops aren’t named and shamed; only the victims – and night watchman Dismukes – get to keep their names. Remember the victims and not the perpetrators? Surely we should know both.

By fictionalising the cops, isn’t this one more acquittal on top of another? Not really, since we see what the cops did, or what eyewitness testimonies suggest they did. The survivors were told to say nothing, but then Hersey did his digging and there was a trial.

The film sets up the events of the Algiers Motel Incident. The lead singer of the Dramatics, Larry Reed (Algee Smith) is about to perform at a music venue, right after Martha Reeves and the Vandellas, but then the concert is halted owing to the rioting outside. Bigalow gives us a poignant, goose-bump moment of Larry standing in front of an empty auditorium, no band behind him, singing unaccompanied. Weirdly, it is a metaphor for the film. It sings, it shines but there is no one to see.

Larry and a young friend end up a motel where they spy two young guests (Hannah Murray, Kaitlyn Dever) for whom the money has run out. Larry wants to get the young man laid. He wants to sprinkle some stardust – but not drugs (not in this movie). They head up to a party of sorts in a hotel room and gain admission. One guy has an itty-bitty starter pistol, a dinky thing, which he fires out of the window. Not a clever thing to do when the cops think there are snipers.

The question of whether there were snipers as well as looters taking part in the Detroit riots is open to conjecture.

The case for: on July 25th, James L. Kerwin of the Detroit News saw a sniper’s bullet kill a fireman, Carl E. Smith, right before his eyes.

The case against: Peter Blackmer, Newark, NJ, historian argues ‘police used the myth of black snipers to justify brutality in the long hot summer of 1967’, arguing that no snipers were ever found, that sniper fire was used to justify the death of New Jersey detective Fred Toto in the Newark riots when he was more likely killed in the crossfire.

The real question is: just how many African Americans had guns in 1967? 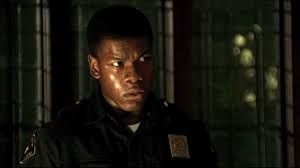 Bigalow and Boal don’t tackle the sniper question head on. In their film the police and National Guard believe snipers are out there. The (non-lethal) gunshot from the window certainly drove them to fire back. It was a prank, for sure, but one that had lethal consequences.

The film is true to the terrorizing technique that the cops used. Men and women are lined up against a wall and interrogated: ‘where’s the shooter?’ One of the men is taken into a room by police. There is a gunshot. The cop emerges. ‘The interviewee is dead. Who is next?’ The intention is to scare a confession out of one of the group. Then a cop shoots a man for real and suddenly it is time for victim management.

The real subject of Detroit is the abuse of police power. There is an interesting contrast between soldiers, as portrayed in The Hurt Locker and Zero Dark Thirty, and police as shown here. The former are treated as heroes, the later as villains, unchecked by the National Guard. The film promotes a disrespect, nay, a loathing of police. It is justified in this instance but still problematic.

It is one thing to say the police are bullying racists, quite another to say why. Were they let off the leash to indulge their own prejudices, or did the institution promote racism? Did in fact their attitudes start in their training? The more I think about it, the more Detroit comes across as irresponsible filmmaking.

The suspense is nail-biting and the drama compelling. But I don’t think that Detroit says any more than a rap lyric: ‘f- the police.’ For this reason, its low box-office seems like cosmic justice. Bigalow is a talented, committed filmmaker, but she has misdirected her talent. Hers isn’t the worst film to be released in 2017 about a race riot (that would be Kings) but it isn’t responsible filmmaking either.

Pictured: Nanisca (Viola Davis), fearsome general of the Agojie in a scene from the historical actio…