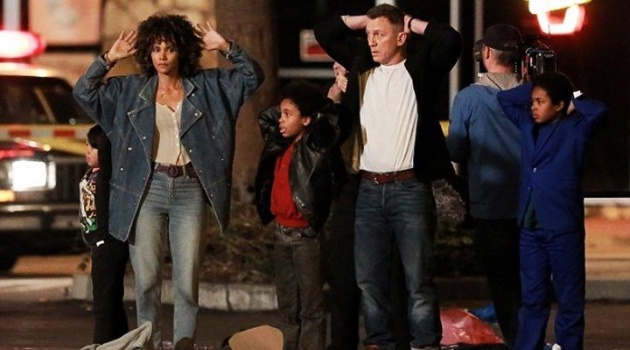 Pictured: Millie (Halle Berry), Obie (Daniel Craig) and kids are apprehended by cops during the Los Angeles riots in 'Kings', written and directed by Deniz Gamze Ergüven. Still courtesy of The Orchard

It is inevitable that not all films by women directors make their intended impact. They could be compromised by studio interference, budget constraints or by a director’s wrong-headedness.

Kings, the second feature from Turkish-born but currently stateless writer-director Deniz Gamze Ergüven, is a victim of the latter.

This is Ergüven’s passion project, inspired by her time spent in South Central Los Angeles and a profound interest in social protest. It is also her first film with genuine movie stars: Halle Berry and Daniel Craig. Not that this is any kind of recommendation.

Wind back two years: Ergüven’s debut feature, Mustang, is screened to acclaim at the 2015 Cannes Film Festival. It has a successful opening in France, but upsets Turkish authorities, since it is about five Turkish girls and their response to being married off in the Turkish way, treated as property, not as people.

The script for Mustang was co-written by Alice Winocour (Augustine, Disorder) apparently out of friendship. According to Winocour, they laughed all the time whilst writing. On Kings, Ergüven didn’t have a co-writer, no-one to laugh with or to offer encouragement and constructive feedback. If she did, a certain dream sequence with Berry and Craig would not have made the final script.

Kings is a fictional film about a family of African-American waifs and strays housed by self-styled foster mom, Millie (Berry) living in South Central Los Angeles in 1992 shortly before the ‘Rodney King verdict’ was announced. By ‘Rodney King verdict’, I mean the case against four (white) Los Angeles Police Department officers who were on trial for beating African-American taxi driver Rodney Gordon King on 3 March 1991 and caught on camera doing so. The four officers were acquitted of any wrongdoing on 29 April 1992, sparking the Los Angeles riots.

I firmly believe that any film director is free to make any film about any subject as long as they respect cultural sensitivities, do not slander the living, and communicate through the medium of cinema the purpose of their film. Communicating purpose is not to preach, rather to offer a valid perspective, to tell a story that had not been told before and to tell it coherently.

Kings is a mess. Tellingly, at one point, a toilet is stolen from the family home. OK, I haven’t seen that in an American film before, but there is a place for stolen toilets in movies, and it isn’t necessarily films about the L.A. riots.

What should one feel about riots? They are not organised social resistance towards a particular end; rather explosions of anarchy, of outrage and opportunism. You can condemn a riot or understand it as a release valve. However, different people get different things from a riot. For some it is justice, others payback, others still it is an opportunity to make a buck. You can’t remake society in a riot, but you may be able to do so afterwards when you face up to its causes. A film can dwell on that. Or, as in Kings, a film can be absorbed by the peculiarities of rioting, what it throws up.

After a prologue in which an African-American is shot by an Asian-American shopkeeper (a comparatively rare moment of seriousness played straight), the drama begins with Millie waking her children up before heading off to deliver some cakes. The children are left to fend for themselves, to get themselves to school, or not. Her house has a chaotic normality, but it is never exactly clear how she has enough money to feed the children and pay the bills, how she has time for each child and what the heck she does about school and medical insurance.

Millie’s household is interesting enough to be the subject of a movie in its own right without throwing the ‘hot button’ subject of police brutality against black Americans into the mix; what we watch is chaos thrown on top of more chaos. Now I applaud Ergüven eschewing the equilibrium-disequilibrium-re-equilibrium traditional narrative structure, but what she replaces it with is the equivalent of an over-flowing cistern. This is just too much going on for us (the audience) to give a good damn.

Craig plays her neighbour, an English writer who finds it hard to get much work done and is upset by the noise and chaos from his neighbour. His character is never named in the film so I’ll call him The Writer, although this ain’t no Tarkovsky flick.

The film is a series of vignettes that lead to the trial verdict. In fact, practically the only thing on television is the trial. At one point, a character changes channels and the trial is on every TV station. This is a stylistic exaggeration, but to what end? Is Ergüven saying that the trial dominated public consciousness or that commercial television was suspended because the trial was the most important topic in America – or in Los Angeles – at that time? It is at best a slightly amusing joke, or more accurately an indicator is that the film is in fact a fever dream in which the trial appeared to dominate the airwaves, like a subtext brought to the constant surface.

One path Ergüven could have chosen is to power her film with righteous anger, to make a woman’s version of Do the Right Thing. She certainly shows how stealing is not regarded as transgression. A girl steals from a shop run by an Asian-American, attracts his wrath but then some African-American males get involved. The girl gets into one man’s car but then calls him out when he wants to take her some place. In another movie, this might be the beginning of a plot, but here it is an incident to show that this girl isn’t going to be a victim and knows where male overtures can lead. This scene is part of a tapestry of behaviour, but the film isn’t defined by it. There is a love triangle of sorts in which one guy stabs another over a girl and then the stabber and the girl try to get the guy medical attention during the riots. This becomes one of two parallel ‘riot’ stories as Millie and The Writer head out looking for a lost child.

About that dream sequence. At one point, Millie dreams of The Writer kissing her. Both characters appear against a black background as if floating. The ‘love scene’ is hyper-stylized. We hear Millie’s voice: ‘this is just a dream’. Then she wakes up. Now, I have an idea of what this scene is doing. In a movie featuring two Hollywood stars, we expect their characters to get together. Ergüven is subverting the audience’s expectations, to show how ridiculous this is in a real context. However, the point is undermined by Ergüven needing Hollywood stars to get her film made. What has this got to do with the L.A. riots? The result is total confusion, giving the audience a reason not to care.

One scene captures what I think Ergüven was going for. During the riots, a group of young children with Molotov cocktails face off against some Burger King employees, who attempt to convince the kids not to torch the store. If they do, any number of tasty treats will be gone from the kids’ neighbourhood. The employees name said tasty treats; I will not. Rioting throws up some surreal comedy. Other scenes have a similar tone, when a white cop deals with two misdemeanours from different felons at one time and says ‘I hate this job’. Ergüven spends a lot of time on a scene in which Millie and The Writer are handcuffed by a cop to a lamppost, The Writer shimmying up to get free. OK, I have not seen that in a movie before, but I say again, for what purpose.

Kings is defiantly the opposite of a Hollywood social consciousness-raising film about race and racial injustice. It is partly a celebration (with some downsides) of rioting, the party atmosphere, minus Kid and Play. It returns us to Millie’s house with one of the older children waking the other kids up. Yes, things have happened. One of the characters has died. I think we are supposed to think about how things remain the same. With regard to police brutality in America, the point has been upheld by the Black Lives Matter movement. The point has been made here without any force.