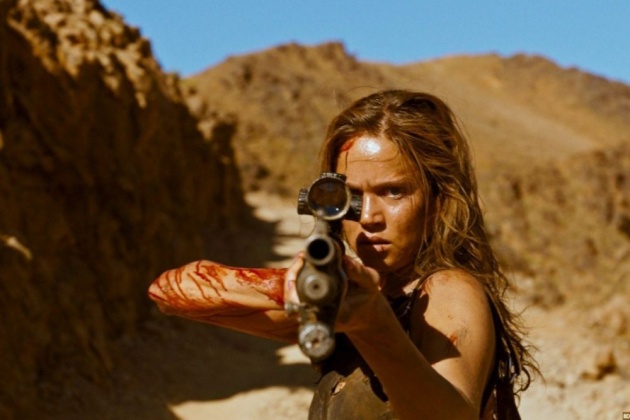 Revenge, the debut feature of French writer-director Coralie Fargeat, is a case in point. It is a rape revenge movie – bloody, but also bloody ridiculous. Shot in Morocco but set in Arizona, it stars Italian actress Matilda Lutz as Jen, the scantily clad American lover of Richard (Belgian actor Kevin Janssens), who is married with children and away on a hunting trip. Jen hopes to go to Los Angeles, but right now she does the things that provocative young women enjoying a luxury life style do: parading in skimpy clothes, eating a lollypop, wearing star earrings, and dancing with one of her lover’s friends, Stan (Guillaume Bouchède) by the swimming pool. After the previous night’s pool party, Stan comes into Jen’s bedroom, asks why she doesn’t like him (‘you’re too short,’ she offers as a plausible excuse) and then he tells her that he wasn’t too short for her last night. He then attacks her. Dimitri (Vincent Colombe) surprises them. Stan tells him to either join in or leave. Dimitri leaves, drowns out Jen’s screams with motor racing on TV and then goes to the pool. When Richard returns, Stan and Dimitri have something to tell him.

Ostensibly comforting Jen, Richard slaps her when she demands that she be flown out of there – they arrived by helicopter in the film’s dramatic opening. She runs away. All three men chase her. She ends up facing them at a cliff edge. Richard pretends to phone the helicopter pilot, but then he does something surprising and shocking which I won’t reveal.

The film then has a development that you can either choose to accept – improbable though it may seem – or shrug off as ridiculous. Chances are you will accept it because Jen deserves payback, although it isn’t actively sought – the title is misleading. The three men contrive to cover up their crime and appear to have the upper hand – possessing vehicles, rifles and shoes (Jen left the house barefoot). The men land some blows before they meet their fate.

At one point, after making a gruesome discovery, Richard tells one of his friends to switch the air conditioning off in his car – it is environmentally unfriendly. This – and a chase sequence that takes place while a sales channel advertisement is on television – is the nearest Fargeat gets to comedy. That is, if you discount the blood – and there is a lot of it.

The practical effects, though gruesome, are not convincing, though there is a long, vaguely absurd sequence in which one of the men removes a glass shard from his foot. Grunting with effort, his face flushes bright red. At the climax there is a long chase around and round a single location – Fargeat pushes the length of some sequences to extremes (she is also credited as one of the editors) making some moments more drawn out than in a formulaic horror film. There is one extensive single take that leads to a reveal.

There is also a sequence involving a beer can and a gaping wound that requires cauterisation that might stretch what you are prepared to accept in a horror movie. When the men are struck it is rarely in a tidy ‘cheap scare’ type of way.

By the end, Jen is berated for fighting back. Significantly for a French film, a lot of the dialogue is in English – in fact it has just about enough French to qualify for state aid. This makes it entirely easy to watch in version original if you happen to be in France and ne parle pas français.

The amount of blood is excessive and serves to make the film resemble a comic strip. It is not shocking.  For most of the second half of the film, I wondered whether Fargeat would address Jen’s back (for a reason that I cannot reveal). She doesn’t – and you might consider this a failure of internal logic.

The one horror trope that it does employ shamelessly is the dream sequence. This after one of the characters has consumed peyote for medicinal purposes. There is the first false shock and a second one and then – well, you’ll get the idea.

For a horror ‘B’ movie, it is longer than you might expect – 108 minutes – mainly because Fargeat really does draw out those action sequences. At one point, one of the men describes themselves as appearing vulnerable to draw their prey towards them. ‘Drowning is my preferred technique,’ he boasts. My favourite shot of the film is Richard on his motorbike, helmet on, zooming along a desert road in the night, the two zips over the breast pockets of his leather jacket swinging like nipple tassels. It is one of Fargeat’s two homages to David Lynch’s desert noir, Lost Highway. The second is the casting of Kevin Janssens, who is a Bill Pullman lookalike. Overall, Revenge is an entertaining midnight movie – if only cinemas screened them more regularly. I grew up on the late night double bills offered by the Paris Pullman, Screen on the Hill and the like – all cinemas in West and North London. The retro score – a throwback to the 1980s – and the squelchy sound effects add to viewing pleasure.