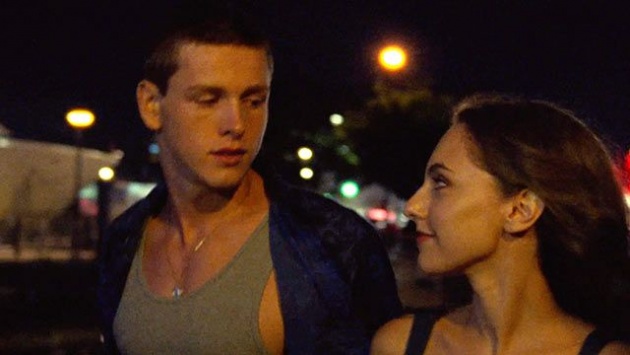 One of my favourite film titles of all time is ‘What Rats Won’t Do’. You have a rodent who noses around looking for food, biting indiscriminately and spreading disease. Then there is something that it would treat disdainfully, an invitation it would turn down. Incredible! At any rate the film didn’t live up to its title; in fact it didn’t get a cinema release. So ‘What Rats Won’t Do’ is still a mystery.

This brings me inelegantly to Beach Rats, a film written and directed by Eliza Hittman (born 1979), whose previous credits include It Felt Like Love (2013) and the short, Forever’s Gonna Start Tonight (2011). It is about a young man, Frankie (Harris Dickinson), living with his mother (Kate Hodge) and sister in Brooklyn, who repeatedly visits a gay chat room and looks at who’s on offer. To those who ask, he explains that he doesn’t know what he likes. In a shot quite late in the film we see him framed against a sign that reads ‘electric closet’. Frankie is in the electric closet all right; he is on the brink of collapse. We spend the entire film worrying about him because he acts but doesn’t talk. Actions may speak louder than words, but they can also be irreversible. When he mocks a girl, Simone (Madeline Weinstein) who is in his room, stripped to her bra and panties, asking whether he thinks she is pretty (‘are you fishing for compliments?’) Frankie doesn’t understand that language is a way of clarifying consensus. If you just act, and not talk, then you’ll never be truly understood; actions have a way of misrepresenting the person who performs them.

Frankie is struggling with his sexuality, but also with some level of guilt. He is hooked on his father’s cancer medication, which he grinds into powder and snorts. Dad is being cared for at home and is on his way out. He doesn’t speak. There is the suggestion that Frankie is looking for a father figure in his desire for sexual comfort. You find yourself leaping to the conclusion that Frankie discovered that he was gay at the same time that his father discovered he had cancer and that Frankie thinks there is a causal link. At any rate, Frankie doesn’t want to talk about it, because he is part of a pack, a quartet of guys who hang out on the beach, smoking weed and picking pockets. The guys, all nameless, don’t talk much either. With her cinematographer, Hélène Louvart, Hittman depicts them the way women are frequently presented by male directors, with no attention to their personality, only to their looks. Interestingly, this is one group that doesn’t have a leader, typically a neglected male who masks disappointment with aggression. These guys don’t appear to have homes to go to.

Pull Up To The Bumper

Whilst out with the guys looking at the 9:30pm fireworks that take place every night in summer at Coney Island, Frankie catches Simone’s eye. They have a conversation about the beauty of fireworks – Simone thinks they are romantic, Frankie isn’t impressed. Fireworks in movies were once the go-to cutaway to express orgasm. A couple kisses – cut to fireworks, because you couldn’t show sex, only infer it. The fact that Frankie isn’t into fireworks intrigues her – he is not a sexual predator. So after she and her friends follow Frankie and his group to the dodgems (or bumper cars as we call them in England), she gets into his vehicle. He takes her home because he can’t tell her he’s gay in front of the guys; not even when they are alone. After mimicking her by putting her own brassiere to his chest and asking ‘do you think I’m pretty’ she calls him an asshole and leaves him.

Nothing exudes sexual confidence in a man as walking around with your shirt off, but Frankie mostly keeps his on. We watch him with his friends playing hand tennis, though at one point the ball is whacked towards him when he isn’t playing properly. He also hangs with his buddies in a vaping bar – or vapery as I guess they will one day be called.  Vagrancy in vaperies is not like pot pourri to popery; in my other life, I was a beat poet, a dead-beat poet. After his father’s funeral – he declines the opportunity to speak (‘I haven’t written anything’) even when asked by his mother to ‘speak from the heart’ – he reconnects with Simone. For him, she is the perfect cover, so he can continue to hook up with other men and not be called gay. Yet he makes an attempt to sexually satisfy her, masturbating before he gets into bed with her. He hooks up with another older man and gets into his car. He sees a roll of notes on the dashboard. You wonder whether Frankie will take it, but no, it is for a hotel, where Frankie strips with the light on – and backside to camera – in front of the other man. 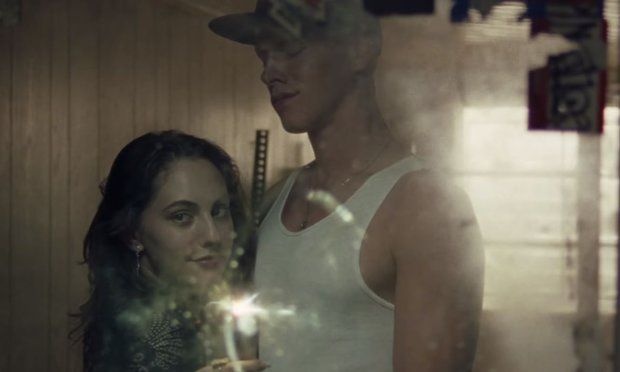 In parallel to Frankie’s sexual disorientation, his younger (thirteen year old?) sister starts sexualising herself, wearing a bikini to go to the beach. When she sees Simone’s pierced belly button for the first time, she wants – and later gets – one. This in spite of Simone trying to put her off by saying the piercing got infected. Hunting around the house for valuables to sell, Frankie and his ‘hangers-with’ (as he repeatedly says, they ‘are not my friends’) spy his sister with a young boy; they usher him out. Frankie pawns his mother’s earrings. The guys – and Simone – head for a party on a boat and after being spotted by one of his male one-night stands, who then offers him drinks of the house saying ‘I can’t resist a pretty girl’, Frankie doth ingest too much.

The film’s sense of impending danger finally explodes when the gang desperately want weed and Frankie admits that he can get it from one of his pick-ups: ‘how do you feel like partying with a gay guy?’ He explains that he goes on gay websites to get weed – messed up, but, y’know. So they contrive to mug one of Frankie’s dates.

The film begins and ends on the beach. Near the start, in what we discover is Frankie’s screensaver on his basement computer – he won’t sleep in his own room, since his sexuality is literally underground – there is a gull trapped on the beach by gently advancing waves. The bird, rather like Frankie, seems directionless. The final image is of rolling waves, a familiar signifier to turbulent sexual desires, but there is no one in the picture.

Beach Rats is so well-observed that I could imagine that there were guys out there like Frankie who might be caught in the perfect storm of a father dying whilst in the midst of sexual discovery. A young person’s inability to express emotion – partly from peer pressure and partly from a fear of labels – is a universal experience. I’m not sold on the title – maybe Hittman saw Kevin Smith’s Mallrats and decided to react to it. The advertising is misleading too. This is about one young man’s experience and has a specific truth. It is not about group mentality.