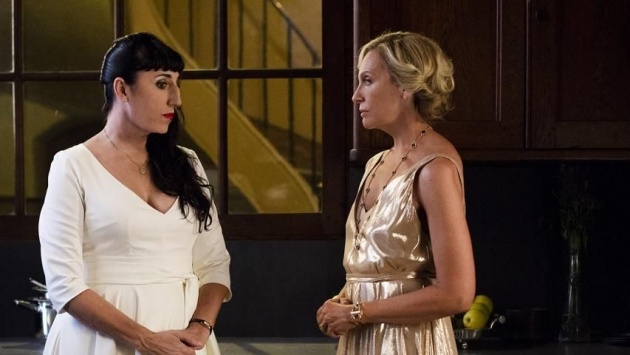 Pictured: Maria (Rossy de Palma) and Anne (Toni Collette) have a last minute talk before the party in 'Madame' a study of what forms in the eye of the beholder, co-written and directed by Amanda Sthers. Still courtesy of Studio Canal Australia

Some film critics are all too quick to ascribe a form to the film they have watched, usually labelling it in a negative way: an unexciting ‘thriller’, a ‘horror’ film without scares and so on. What they don’t do is recalibrate their interpretation to better describe the spectacle that is presented to them. I don’t blame these reviewers so much. A filmmaker may offer an element associated with a form, for example, an individual pretending to be someone else for the sake of appearances. We associate this trope with farce. There is a high stakes situation and the person with power must not discover that the woman he has fallen for is in fact the maid. How could he be tricked in such a way? What else might he think as a result?

Farces depend on their comical impact on the utter collapse of order – the pretence that spirals out of control. What happens when a filmmaker takes the promise of a farce but uses it to interrogate the impulse behind the deception? The drama’s impact is less in comic collapse but in something rather more subtle.

The subject of Madame is the male response to a woman of means: the projection that takes place on the part of the man, and the aftermath. It is about the precarious power of women, present at one moment, gone the next. It illustrates the absence of female solidarity between classes. Moreover it concerns itself with the precarious nature of wealth, which can be eroded at any time.

Madame – the title is a throwback – begins with two well-known actors, Harvey Keitel and Toni Collette, on rented city bikes in the middle of Paris. Hang on a moment – city bikes? These are used by tourists to get about in large cities, as an alternative to cars, buses, and walking. But it is also a nod to the days when the aristocracy rode horses in their finery. For the rich, city bikes are a come down, but they also represent an attempt to get with the ecological program. Our large corporations may be plundering the earth’s resources for mid-term profit, but look at that, I have my own bicycle repair kit. Cycling, as I have recently discovered on the island of Anguilla, which has no functioning public transport system, is perfectly fine on the gentle downward slopes, maintaining your balance and shouting ‘wee’ but it requires serious thigh strength for the uphill bits. 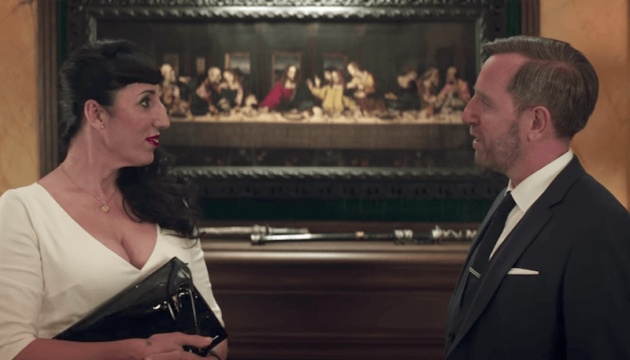 My sympathy extended to Keitel (as Bob Fredericks) who decides that this cycling malarkey is not for him. Besides, he explains, it’s going to rain. In my country, Keitel is the face of Direct Line insurance, riffing on his role as the Wolf from Pulp Fiction. If he says it’s going to rain, well, my friend… Collette (as Anne Fredericks, Bob’s former golf coach, now his wife) carries on. But then she is drenched by rain. Not actual rain – this is a movie shot on a tight production schedule with a $4.5 million budget – but CGI rain. Anne is exasperated. So are we – CGI rain? Well, maybe if the film is shot in the Euro heatwave of 2018.

So Anne is hosting a dinner party and one of her guests is the Mayor of London, who is bringing his husband. Sthers isn’t talking about Sadiq Khan – we Londoners voted for a Muslim mayor above Zac Goldsmith – but she wants to say something about how progressive London is and how Bob Fredericks himself is something of a draw. But the London Mayor is not the most important guest – the honour falls to art appraiser David Morgan (Michael Smiley). The Fredericks have money problems. Rather than downsize their household, they elect to sell a painting – that’s David’s job to help them.

I had to imagine that the painting was already appraised when the Fredericks acquired it, but it could have been copied since. Anyway, the painting appraisal doesn’t worry Anne. It is that her son-in-law Steven (Tom Hughes) has turned up. He’s a respected author suffering from writer’s block with a manuscript to deliver. Anne needs another guest – and fast. She turns to her maid, Maria (Rossy de Palma) to impersonate gentry. She can sit and eat but she mustn’t speak.

The predictable happens. David is seated next to Maria and talks to her, asking if she knows any jokes. She delivers a long one about the three ages of men verses the three ages of women. It is in poor taste. None of the women around the table want to think about their age. David is enraptured – or says he is. In truth, he has never spoken to nobility so it is Maria’s assumed status that intrigues him.

In Act Two, David starts dating Maria, much to Anne’s chagrin. But there is other stuff going on. Bob has a French teacher, whom he takes to a boulangerie. Anne is also on the verge of having an affair.

Madame is one of those films you can fast forward to the end. Before that, I want to talk about Maria’s shoes. When she becomes the 14th guest, she hides her terrible shoes under one of Anne’s borrowed dresses. She borrows another dress when she goes on a date with David. I mention these shoes because the last shot of the film is Maria in a pair of well-fitting black heels which she wears with elegance. Shoes are a metaphor.

The film’s best moments come in the final third: David paying Maria no heed when she is in her maid’s outfit; Anne jumping into the pool naked to discover that the man she is trying to attract isn’t interested. The final third also features Sthers’ worst idea: Steven has written a manuscript entitled ‘The Maid’.

Having set up the potential for a farcical conclusion, Sthers highlights the disappointments of both Maria and Anne. One of them wears it better than the other, in a very literal sense.

Keitel is essentially redundant in the latter stages of the film. This is the Collette and De Palma show. Both actresses are striking looking, neither being conventionally beautiful, but both having a certain form of elegance. De Palma with her (broken?) nose looks like she has stepped out of a Picasso painting, although having just thought that, I’m at pains to imagine which one. Picasso’s paintings of Dora Maar, for example, strike me as too cruel. Collette made her name as the ‘ugly duckling’ who Muriel’s Wedding and hasn’t looked back. My favourite work of hers in the last decade is the 2013-14 American TV series, Hostages, which criminally only lasted one season.

Both actresses exist on different planes; their careers have had utterly different trajectories. Yet they complement each other; both are outsiders who have become mainstream.

Search on imdb and you’ll find some unsympathetic reviews of Madame, essentially complaining about the lack of an ending. To me, the film ends where it needs to. One woman remains un-self-aware, the other has found a spring to her step, having learned how to be a Madame and make men’s heads turn, if only to enjoy the moment. What is life but a series of moments, rather than three acts.