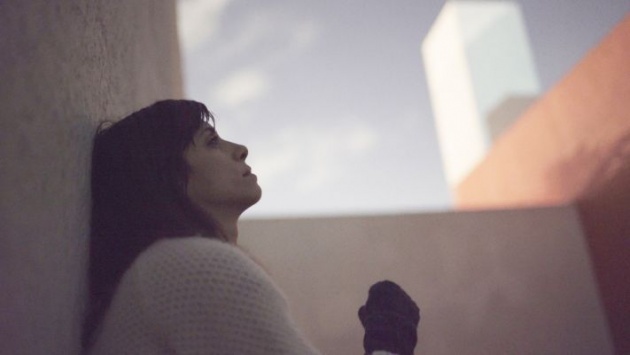 Pictured: Director Jill Magid communing with the spirit of the late Mexican architect Luis Barragán (1902-88) in her film, 'The Proposal'. Courtesy of Field of Vision

If you want to discuss intellectual property law at a quarter to midnight, then the International Film Festival of Rotterdam (IFFR) is the place to be. There on Friday 25 January 2019, artist Jill Magid was answering questions about her film, The Proposal. Generically, it is a documentary, following Magid’s attempt to gain access to the entire professional archive of the late Mexican architect Luis Barragán (1902-1998). The problem is that all of it – several thousand drawings and such – is owned by Vitra, a corporation in Switzerland. Access to it is controlled by a fiercely protective woman, Federica Zanco, who apparently asked for the archive from her boyfriend, Rolf Fehlbaum instead of an engagement present. Some people are hard to please – except if your boyfriend has $2.5 million to spare. All requests sent to Federica are met with a frosty ‘no’. Magid worked hard to convince her of her sincerity and love for the artist’s work – the word ‘love’ – is very important. However, Federica’s reason for refusal lies in her reported attempt to turn the archive into a book. A book over twenty years in gestation; it didn’t take me that long to read Lord of the Rings.

I say ‘generically’ it is a documentary, but it is two other things besides. The first is a provocation, designed to bring to wider attention the case of the inaccessibility of Barragán’s archive. However, Magid does not interview a whole bunch of experts to convince us that it should be made available to all. She’s an artist, not an investigative reporter. The second is a recreation. This isn’t immediately apparent, but Magid only started filming at the point at which Barragán’s ashes are interred. What would she want with 530 grams of human ash with the possible trace of a nail from their container? The answer is bold and provocative.

It was only supposed to be a short, The Exhumation, commissioned by Laura Poitras, the Oscar-winning director of the documentary, Citizenfour. However Magid expanded it into an 83 minute feature to tell the story from her initial correspondence. The way the movie is structured, Magid spends time in the guest bedroom in Barragán’s house – where all the girlfriends slept, she is told. Then she convinces Barragán’s living relatives – all twenty one of them – to agree to the best way to liberate (so to speak) the archive from Federica. Then there is the correspondence leading up to the exhumation. Then Magid takes some of his ashes to a laboratory in Switzerland where magic is worked. They are distilled into a coal grey diamond. 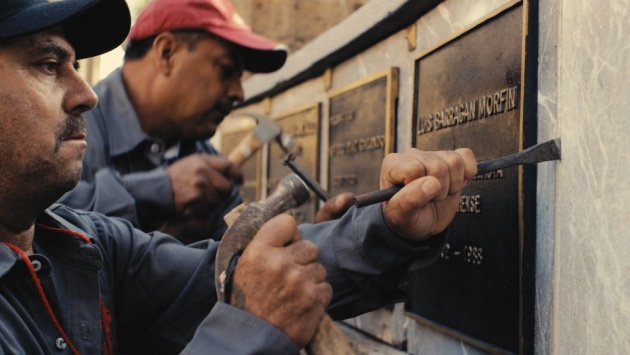 Pictured: The Exhumation of Luis Barragán - not to be confused with the title of a Plan B Album - as featured in Jill Magid's film, 'The Proposal'. Still courtesy of Field of Vision

At one point, Magid is told that Barragán liked to work with the smell of wet clay wafting into his work space. So she pours water on clay pots in the artist’s yard. I’m not sure that this is normally permitted in UNESCO World Heritage Sites, but Magid is not deterred. She is slightly put out that during her residency in Barragán’s house, she cannot sleep in his bed. Then again, ghosts and the Day of the Dead play their part.

Indeed, Magid is only allowed to stay in the house whilst it was closed to the public during the aforementioned Día de Muertos. Thinking about his death gave her an idea. This is not connected to Barragán’s appreciation of art based on other artists’ work – he had some faux paintings on display in his studio. But Magid was agitated by Federica’s decision not to let her appropriate some of his work; one of her offers is to display her work next to his.

At various points, Magid invites Federica to her exhibitions (in 2016 and 2017), one of which has fragments of a building suspended in the air. As far as Magid knows, she declined. However, the two of them do meet for lunch in Basel, recorded in occasionally smeared out photographs by a long lens camera (cinematography: Jarred Alterman). Barragán’s architecture – in as far one is allowed to describe it – suggests someone spray painting all the blocks in Stonehenge in different colours, so that one stone is entirely pink, another entirely blue and so on. As my father’s generation might have said, ‘freaky’. The forms don’t have a pleasant unity, but rather they celebrate the beauty of disunity, of putting a curve on the side of a flat wall for its own sake. Buildings were thus individualised. My guess is that an anti-fascist impulse lay behind this, acknowledging the undesirability of coerced uniformity. But I don’t know much about architecture.

So what was Magid’s proposal? She offered Federica a ring. The jewel was made of Barragán’s ashes. Acceptance of the ring meant that Barragán’s archive could be returned to the people of Mexico. Barragán’s archive was sold because it cost too much to maintain – Barrágan bequeathed it to a friend and it passed to the friend’s widow. No one in Mexico wanted the archive – or had $2.5 million to spend – until it was too late.

It isn’t a spoiler to say that Federica hasn’t – to date – accepted the ring. Nor it seems has continued her written correspondence with Magid. The director is still hopeful that Federica’s book may yet be complete. I ended up thinking of Vladimir Nabokov’s final work, The Original of Laura, which was not completed at the time of the émigré Russian author’s death in 1977. For years, it was locked away by the author’s son, Dimitri. Then, it was finally published in 2009. It was a collection of 138 handwritten index cards that could be arranged in any order. The response was one of crushing disappointment. The promise of a work – one more masterpiece - was more tantalising than the thing itself. Perhaps Barragán’s archive – or the book that may result – may be less revealing than one imagines. It might be just as valid for someone to trace Barragán’s creative methods through his finished buildings rather than rely on a treasure locked away like The Ark of the Covenant at the end of Raiders of the Lost Ark. At any rate, I have no doubt that Federica was weirded out by Magid’s proposal. Wouldn’t you be?