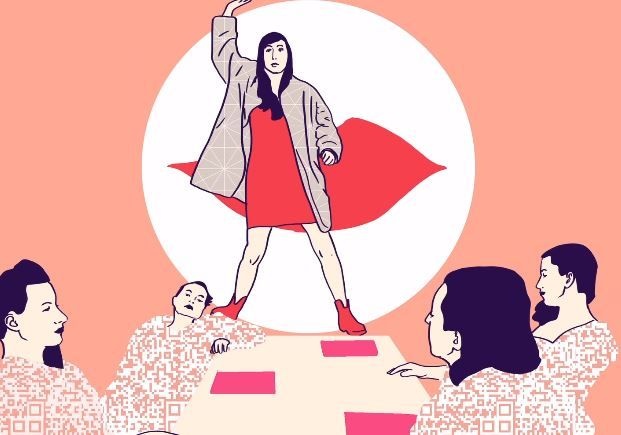 Pictured: The Melancholy Girl (Marie Rathscheck) makes a stand for her right not to necessitate the happiness of men in 'Aren't You Happy', a German film by writer-director Susanne Heinrich). Still courtesy of Deutsche Film & Fernsehakademie Berlin (dffb).

Recently, one of my reviews was re-tweeted with the words ‘spoiler alert’. A film review in the proper sense is a re-watching of the film in the head of the reviewer - in other words, an act of memory - with some commentary. Other forms of writing are consumer advice. I do reviews. I don’t offer consumer advice. The purpose of the review is to draw links from the film I have watched to other movies and to representations of life in general, hopefully with some humour. Many of the films I describe won’t be seen by users of the platform Bitlanders, so I am to some extent describing a foreign culture. The words ‘spoiler alert’ sting because they refer to a corrupted form of film reviewing, one frequently prone to superlatives offered without adequate evidence. Most reviewers talk up films, I just talk about them.

German writer-director Susanne Heinrich has crafted a film, Das Melancholische Mädchen, translated into English as ‘Aren’t You Happy?’ which is a commentary of the representation of melancholy women in the movies. Heinrich offers a series of vignettes all of which feature the actress Marie Rathscheck as the title character, who is unnamed and peripatetic. For the purpose of this review, I’ll call her M. The vignettes take place in movie sets representing bedrooms, bathrooms and, in one instance, a tropical island – yes, bed, bath and beyond. There is an even number of ‘chapters’, for neatness, but Heinrich is telling a more or less conventional story of a blocked author who has reached the age of thirty without the outward trappings of settlement (or achievement for that matter) and moves from man to man without enthusiasm, not even for one who cooks pasta without garlic. Another blocked author of a similar age is represented in Sophie Hyde’s upcoming (and very entertaining) film, Animals.

The English language title is a provocation: aren’t you happy? Well, I would have liked a film with some belly laughs instead of laughs at the size of a man’s belly. Spoiler alert: there is male nudity, an odd number of men are seen in the altogether. There is genital variation also. 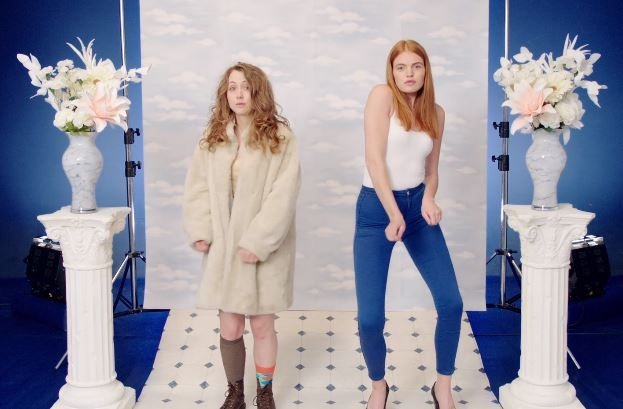 Watching the film, I sat with my notebook recording the English translation of the chapter headings. These include: ‘post erotic times’, ‘objects of desire’, ‘once upon a time’, ‘the dawn of utopia’, ‘feminism for sale’, ‘the longing for religion in disenchanted places’, ‘promise of freedom’ and ‘dancing simulation’. I think one chapter is called ‘the marketing of romance’ but by this time my handwriting resembled the erratic waves of my twice-annual echo-cardiogram. Heinrich is witty in English: one of the background props reads ‘Cry Sis’ (crisis, ‘cry, sister’). OK, I did say there were no belly laughs. There is an elegant precision about the film, which also includes musical numbers – at one point, it resembles an animated pop video, as opposed to an inanimate one. The sets also resemble those in a pop video, suggesting an attempt to un-sell what has been sold. Life, it seems to say, ought to have a returns policy. And talking about the refugee crisis is so difficult as well, because it is hard to get the context right. The latter is one of Heinrich’s rare forays into a wider perspective.

The film begins with M standing in profile wearing nothing but a faux fur coat which reaches her knees. The backdrop is the aforementioned palm tree. Her monologue centres on the failure to represent melancholy girls (young women) in films. The cataclysmic event has already happened. She does not learn anything or go from point A to point B. She will only reflect the world around her. She is talking to a young man in bed. By the end of the scene she will leave him, because she only seeks a man for a day, as if the male presence is a diet supplement. In a later scene, she describes her blockage, that she has only reached the first sentence of the second chapter of her book. The sentence asks: what should I write next? Throughout the film, a number of alternatives are offered: one man finds her attractive; another with black lipstick has renounced sex; a transvestite introduces her to a DJ, who is making an album featuring the sounds of orgasms, he needs M to complete the final track. There is an older man who prepares the aforementioned pasta, an unemployed philosopher. In the end, M eats an ice cream whilst walking on a travellator. Why ice cream? Because it tastes good. At one point, M acquires a dog, which she names Henri, after considering endearing alternatives. 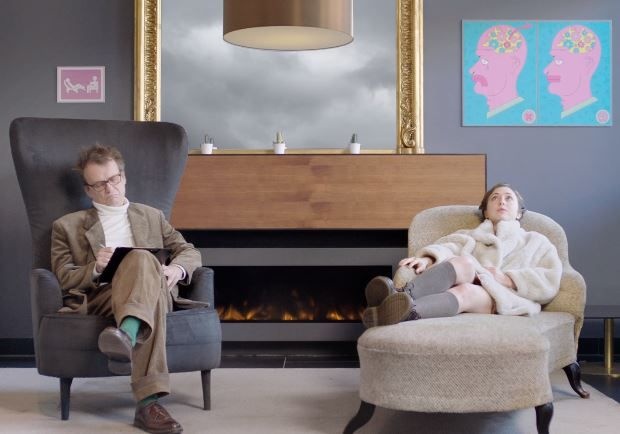 Heinrich tries very hard not to tell us about the age in which we live. She has M take part in an audition, pretending to put on make-up and look sexy. When asked to mime, M doesn’t try. The other candidate, a tall woman in denim jeans with the physique of a professional model, performs to type, even offering a ‘girly’ giggle, which is as unnatural as a human eating dog food. When asked to deliver a monologue of liberation, the model is unconvincing. M sells the words with ease, which are then set to music.

In one scene, M finds herself in a class attended by young mothers, all cradling new born babies whilst sitting on birthing balls. M is asked to join the group, though she does not have a child. As she does so, a child crawls towards her. M looks good with a baby, another woman remarks. M asks for a place to stay, but the woman cannot offer it; not until the baby is a bit older. This is the catalyst for M’s bed-hopping.

Why doesn’t M have a woman friend who could help her out? Heinrich presents M without a support network, relying only on the hospitality of men. When one man says he pities her, she remarks that he has given a good reason not to stay with him. 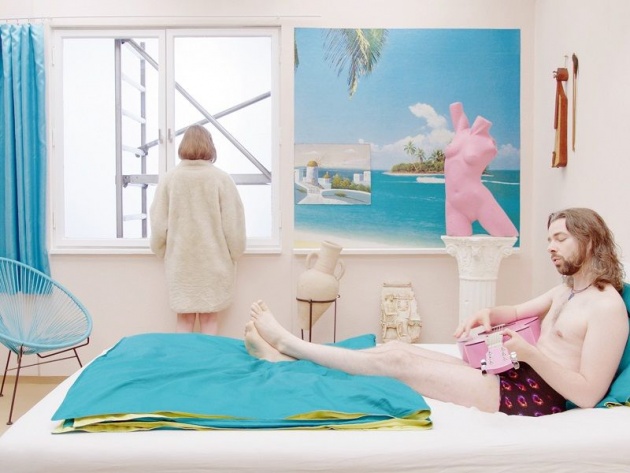 Pictured: With decor like this, no wonder I'm staring out the window!' Marie Rathscheck stars in 'Das melancholische Madchen', a film written and directed by Susanne Heinrich. Still courtesy of Deutsche Film & Fernsehakademie Berlin (dffb).

In one comic scene, M is standing in art gallery with a young man. She is posing, because she looks good posing thoughtfully in front of art. As the camera tracks from room to room we see M in different poses, once with a drink in her hand, which she clinks with the glass of her companion. However, she is uncomfortable with the façade of the sophisticated aesthete. She derives no more satisfaction than she does from sex. There is a montage that demonstrates it.

There is more male nudity in the film than female nudity, which I suspect over time will be some sort of Bechdel-type test. There is also a refrain: an unhappy woman exists to make a man happy. Depression is a political issue. Separate from a man and you can be happy.

This ultimately leads to the travellator scene, in which the pixelated background becomes corrupted and breaks down. M’s self-pleasure (with ice cream) is a disruptor. She might be awaiting the end of capitalism, but her consumption, without a lifestyle attached, is a good challenge. She is also scathing when asked why she is being ironic. ‘I am being cynical. Irony means having no beliefs, while cynicism refers to a loss of romanticism.’

Wit manifests itself in a scene in which a couple’s dialogue is drowned out by extra-diagetic sound – even the subtitles are blanked out. There is a musical number outside two advertisements for the website ‘theperfectmatch.de’. The male ad proclaims ‘no risk’. The female ad features a young woman with two single roses discretely covering her breasts being told ‘let me love you’. M and a young man sing to each other.

Heinrich’s film has a droll humour that is neither ironic nor cynical. Rather, it is well read. In my country, literacy is no guarantee of being able to read. Heinrich has arrived at a conclusion where books aren’t needed, only unicorns with lights on the end of their corn. I found myself asking the question: why aren’t they called unihorns? 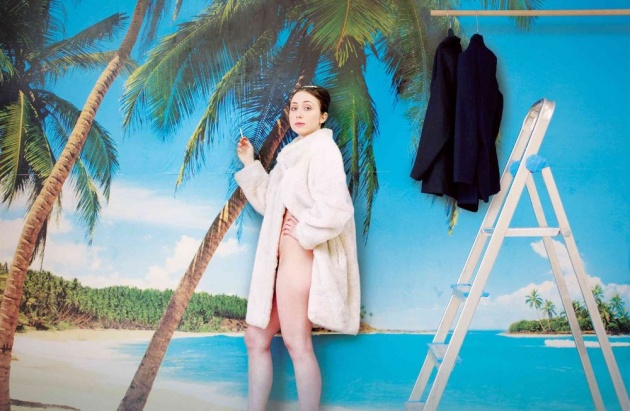