52 Films by Women Vol 4. 42. Endzeit (Ever After) (Director: Carolina Hellsgård) 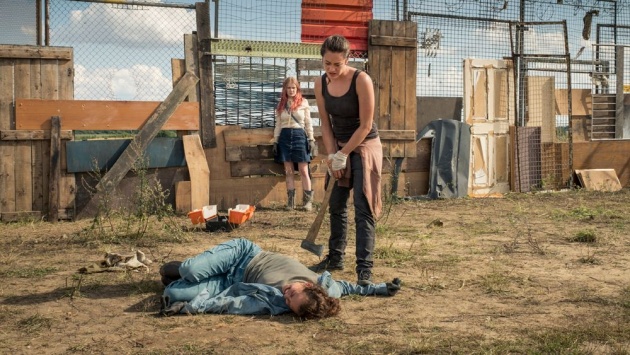 How should you prepare for a zombie apocalypse? First, paint your fingernails black. It does not serve a practical purpose, but it takes your mind off it, you know. Second, get rid of those flip flops. You can’t be fleeing from some ten mile an hour zombie in those things. Plus they are hardly all-terrain. Third, if you have to vanquish one of the undead, put a cloth over its head first so when you bash its head in with a spade or some other garden utensil – no, not the plastic chair, did you really think that would work – you don’t have to look at its collapsed skull.

Adapted by Olivia Vieweg from her 2012 graphic novel, Endzeit (Ever After, though the title better suggests ‘the end of time’ or ‘end game’) is the first female directed zombie film in a crowded genre. It has a money shot: tens of zombies swarming across a bridge near a reservoir pursuing our two heroines, Vivi (Gro Swantje Kohlhof), who hasn’t got over the fact that she didn’t get her kid sister out of the outdoor pool when the zombies struck, and Eva (Maja Lehrer), a hard-as-black-fingernails ‘get stuff done’ type of young woman with a pain in her stomach. (Given the similarity in name, you wonder whether Vivi is the author Vieweg’s surrogate.)

Endzeit isn’t the first female-led zombie apocalypse film – that would be Resident Evil, the 2002 film version of a video game that inspired many sequels. It does not adhere to the delights of the genre, which is to say it is neither a guns and splatter shoot ‘em up, nor isn’t a relentless suspense filled drama. Directed by Carolina Hellsgård, and featuring Trine Dyrholm in a pivotal, or should I say divotal supporting role as the Gardener – she has some weeds growing out the side of her face that are more visually arresting than a unibrow (a divot is the bump of a cricket field that has to be flattened out) – it is a road movie of sorts with an ecological message. Mankind are bad tenants who haven’t paid the rent for a while and now must be kicked out.

Not every zombie apocalypse film begins with a handy explanatory caption, but this one does. An outbreak has confined survivors to two German cities: Weimar, where they fight off the zombies, having built a wire fence and Jena where they are searching for a cure. Weimar is filled with statues that are lit from above with crude spotlights, otherwise they would be cycling hazards – and why are there no mountain bikes in zombie apocalypse movies? You would have thought with the loss of fuel and electricity generation, the survivors would cycle between cities rather than use an automated train that is supposed to carry only supplies. Besides, have you ever seen a zombie on a bicycle? Not very good with hand signals. Actually, I may have seen a few, cutting through red lights while I was crossing the road.

Vivi resides in a mental institution, a fortified building designed to keep people in. She is plagued by flashbacks and recites to herself a childish rhyme in which there is no place for everyone else. As a suggestion, she dyes her hair, which makes her easy to spot in a crowd – or easy to substitute in an action scene. She is bored and asks to work on the fence, which requires frequent boarding up.

There she meets Eva, who gives her a dismissive look (‘we’re down to the weaklings’) and some tools. This suggests that Vivi has a particular set of skills and she does, fixing (stolen) cameras to sell on eBay. Remember eBay? There is a sigh when this comes up in conversation, for something recalled with the same affection as avocado toast. No sooner does Vivi get to work than there is an attack on her entirely expendable co-worker, who is bitten. Eva hacks off the girl’s arm, but the older supervisor wants her to go further. In a matter of fact way, Eva shoots the girl, while Vivi cowers by the fence. Careful, you think to yourself, there was an attack there.

Vivi can’t stay. Clearly the camp hasn’t earned a safety-at-work certificate. So she slips out to catch the unmanned train that goes between two cities, begging the question: if she can leave Weimar undetected, how easy must it be for the zombies to gain entry? ‘We’re down to the undead,’ Eva might say with a resigned sigh as she hands out more tools. ‘Wait a minute – how did you get in?’

Vivi isn’t the only woman on the unmanned train – Eva is there too. Then something exceptional happens. The train breaks down. Well, unexceptional if you have ever used Southern Rail in the United Kingdom, where in all likelihood they would account for cancellations owing to zombies on the track. 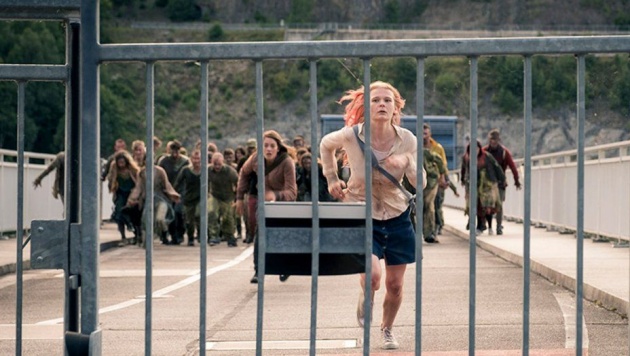 Pictured: 'When you said take up langlauf, I didn't think you meant this!' Vivi (Gro Swantje Kohlhof) and Eva (Maja Lehrer) flee from a conveniently gathered zombie horde in 'Endzeit', written by Olivia Vieweg and directed by Carolina Hellsgård. Still courtesy of Picture Tree International / TIFF

Eva has a bottle of water but she won’t share. Vivi is encouraged to use the train’s toilet. An unmanned train has a restroom? ‘Have you heard about the toilet zombie?’ Eva asks with relish. I have: they stuff sanitary products into the toilet bowl. Vivi is scared to open the door. When she does so (needs must), she makes a surprising discovery (un-spoiler alert: it is a butterfly farm).

Eva’s reconnaissance trip to inspect an abandoned van reveals some zombies in the back – how did they get lured there? There is a running trope of zombies behind locked doors as if that is the most humane way of dealing with them. We get some backstory. Eva carries around a broken camera and wanted to study photography. She was about to leave for the United States when the outbreak took place. Vivi fixes her camera and its selfie time, which is exactly what you would do when you are short of food: think about your status update.  (At this point, writing the review, I started thinking about a Facebook page for the undead, with ‘feed me’ requests. Not so different from the real thing.)

Hellsgård’s film has production values, or at least CGI. At one point, Eva and Vivi see a pair of giraffes. ‘They must have escaped from the zoo,’ Eva observes. I thought they were native to the German countryside. This trope is lifted from Terry Gilliam’s 1995 film, 12 Monkeys, two of Bruce Willis’ finest hours - but how did we know at the time? The point Hellsgård makes is that once mankind stops exploiting the land, animals can reclaim it. 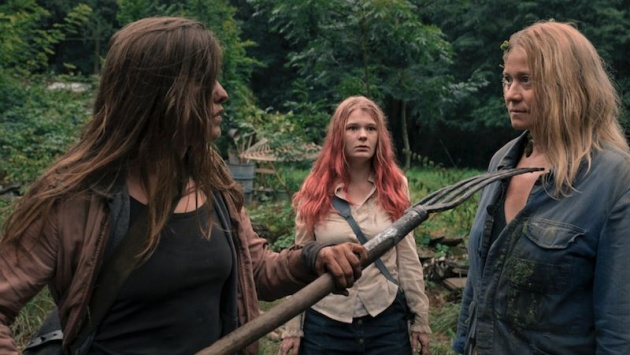 Now if I were Eva or Vivi, I might hitch a lift of the said giraffes. I mean, who has seen that in a zombie apocalypse movie? It would certainly save on shoe leather. At a certain point, Eva and Vivi start annoying each other, even when Eva saves her at one point. They fight and Vivi pushes Eva into a lake where she makes the acquaintance of sea zombies, who have an amazing ability to breathe underwater. That’s a bit steep of Vivi, I thought. Right after they had eaten cucumbers together too.

Once backstories are exchanged, there is the inevitable breaking of the fellowship and Vivi’s attempt to kill herself with a gun with no bullets. ‘If you have the courage to do that, you might as well come with me,’ says the Gardener, who is some sort of evolved human being, fully at one with nature.

The pleasures of Endzeit are fairly limited. There aren’t any big surprises and the film doesn’t transcend the limits of the zombie genre. It ends with a walk into the sunset, illustrating the motto, ‘it’s not the destination but the journey that matters,’ another excuse given by Southern Rail. There is the novelty of a film with only one male speaking part – an old guy who encourages Vivi to follow her dreams (in a manner of speaking). The other men are zombies who roar or groan. The film positions women as the gender most likely to evolve into nurturing individuals who can live at one with tomato plants. There is also the menace of a blind zombie, who leaves a lasting impression on Vivi, and Eva becoming a literally earthy girl. If there is a message, it is that science won’t save us, only cultivating a living henna tattoo. It’s a film for the Extinction Rebellion generation, thought they might baulk at the electricity used to project it. 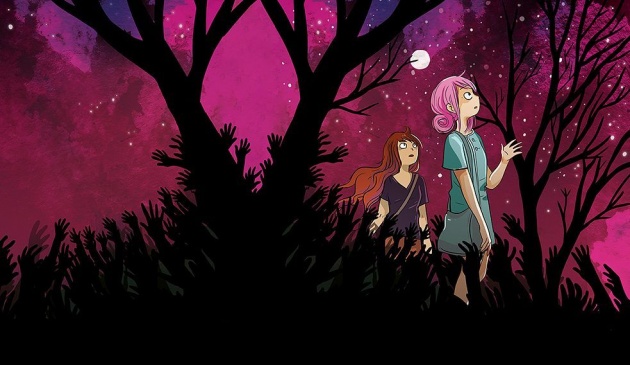 Pictured: Not looking for True Love to find her in the end, Artemis (Sofia Kokkali), a young woman t…