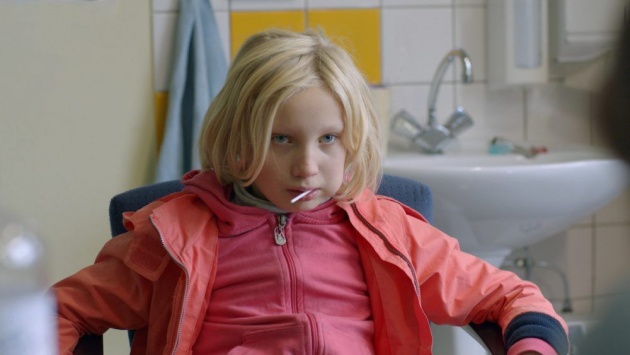 Pictured: Benni (Helene Zengel) in the doctor's chair at the opening of 'System Crasher', a German film written and directed by Nora Fingscheidt. Still courtesy of Beta Cinema / 606 Film Distribution

We like to believe that everyone can be helped. Human beings can be lifted out of poverty, taught to walk again, have their cancer removed and their psychic trauma reduced to a manageable state. Central to this is an unwritten contract between society and the individual: submit to treatment and you will be cured. The individual must buy into their own salvation. Unfortunately, some people can’t and won’t submit. They have their addictions to manage, their perceived needs and bad habits. Benni (Helena Zengel) the nine-year old titular System Crasher of writer-director Nora Fingscheidt’s film is one such person. She cannot bear to have her face touched – it turns her feral. Rejected by multiple group homes for her violent conduct and unable to live with her mother (Lisa Hagmeister) – Benni doesn’t approve of her mother’s boyfriend and when she won’t ask him to leave, Benni attacks her with a jug – she remains a force to be contained. Micha (Albrecht Schuch) has an idea: to take her to the woods for three weeks, working one-to-one. No television, no electricity. But can Benni adjust?

Fingscheidt developed her film over seven years out of an obsession with her own hyperactivity as a child. Her film falls into the sub-genre of ‘l’enfant sauvage’, only Benni is no child raised by wolves (as in the 1970 François Truffaut film) but a young girl with boundary issues. Right from the outset, she is hard to watch, verbally abusing adults and being mean to other children. She hates school, the exposure, the judgment of others. She is completely asocial. Her only sense of self is as an older sibling, the clever caring one. She wants to watch children’s television, perceiving in it a source of calm. She is also clever and cunning, with a great sense of her power as a child, having a protected status that she will never enjoy as an adult.

The director uses bursts of pink lights, drops in sound and blurred disorientating camerawork to illustrate Benni’s torment. For those around her, this is experienced as violence. (The sequences also preview future set pieces, as when there is an unexplained shot of an ice skate.) System Crasher is a violent film; the viewer next to me hid his eyes during one sequence. Do you want to watch one child slam another child’s head against a desk or attack a boy on an ice rink? You are not entertained. Rather you are horrified.

I found myself at roughly half hour intervals checking my watch – not just because I bought a new strap but because I wondered how much of this depressing, yet still intensely watchable movie I had to endure? Fingscheidt doesn’t believe in miracle cures – the revelation that explains Benni’s torment and gives her the key to managing her own condition. Instead, Benni endangers everyone around her. 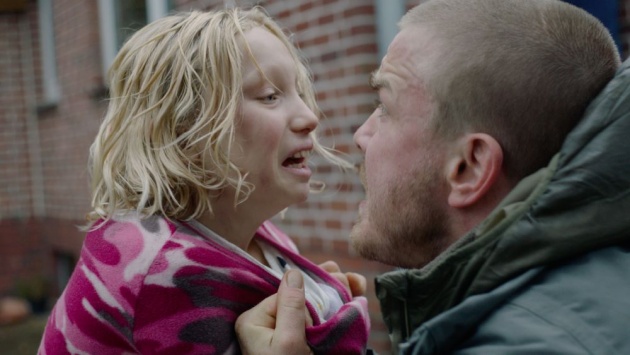 Just occasionally, Fingscheidt withdraws from her subject. There is a happy scene in which Benni joins her siblings at a fast food restaurant and is overjoyed to hear that her mother wants her back, so overjoyed that she knocks the French fries that her family is looking forward to and stands on the table, waving her arms in the air. Fingscheidt shows a mother usher her children away from Benni as well as the cleaner who sweeps up the fallen fries. Benni is in her zone of selfish happiness. She only has her own pleasure at heart.

Benni is initially intolerant of Micha but goes with him to the woods. She isn’t great at fetching milk – a farmer accuses Micha of facilitating animal abuse. A farm dog barks at Benni. Benni barks back and throws a rock at the animal. Benni bonds with Micha after he gives her tools to smash up a wooden structure. We then see her push over a tree. However, when we see Benni around an axe, I started to worry. At one point, she runs away. A distraught Micha eventually finds her in the farmer’s house watching television. She had spent the night in a cow shed.

Micha hopes to win her over by showing her where the barn owls live. Their home is empty. Benni is interested in Micha’s home. Reluctantly, he brings her there.

The adult response is initially caring. Micha’s wife looks at Benni and gives her a bath. Benni asks awkward questions like ‘why are you having one child straight after the other’. ‘It wasn’t planned.’ ‘You should use better contraception.’

Helena Zengel gives one of the most exceptional child performances in recent years, genuinely becoming the character. Recognition for her work is widespread. Director Paul Greengrass cast her opposite Tom Hanks in his next film, News of the World. Zengel has also been nominated for a European Film Award as Best Actress. Great performances generally come from great characters, and Benni is utterly memorable and remorseless, rude and resistant to socialisation. After the film, I started to recognise system crashers as a social type, unwilling to compromise and angry with everyone, using phrases like ‘I am beyond furious’, which sounded like the fifth film of the Mad Max series. They are creators of one long shouting match trapping you in their world of unreason.