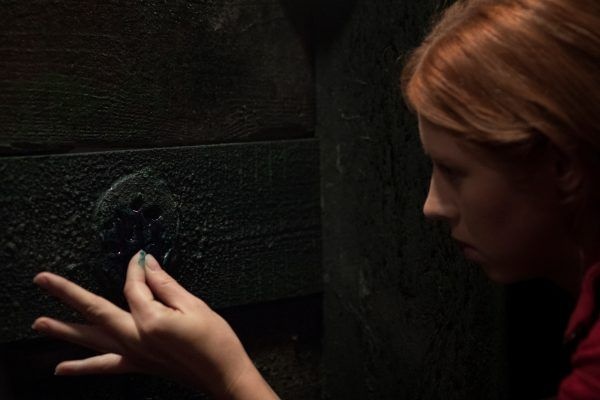 Pictured: What is the secret of the ooze? Siobhan (Hermione Corfield) investigates blue sludge in the Irish nautical eco-thriller, 'Sea Fever', written and directed by Neasa Hardiman. Still courtesy of Signature Entertainment (UK)

Having directed episodes of the hit Netflix show, Jessica Jones, as well as the British TV series Happy Valley and Scott and Bailey, the Irish writer-director Neasa Hardiman makes her feature film debut with the highly generic eco-thriller, Sea Fever. In it, a fishing boat out of permitted waters makes an acquaintance with a glowing multi-tentacled sea creature, whose venom causes human eyes to shoot out of their sockets. That, you might say, is more like it. However, Hardiman is not much interested in gore. Rather she imagines said creature as the guardian of fishing stocks, present to warn humans of the dangers of over-fishing. Your eyes are bigger than your stomach, she is saying, so much so that they are fit to burst.

Her heroine is shy, socially awkward biochemist and behavioural scientist, Siobhan (Hermione Corfield). She observes patterns, draws and concludes and exclaims, ‘that’s not right’. She also avoids birthday cake. After a reluctant parting from her petri-dish, she joins the motley crew of the good ship Niamh Cinn Oir, named after a sea spirit. Her employer has paid for her to study the catch as well as pop into her wet suit and go for a wee swim. The skipper Gerard (Dougray Scott) is livid. Fishermen do not swim. What they do, as we discover, is drink Carling Black Label, in a conspicuous piece of product placement.

We are introduced to the crew by young Johnny (Jack Hickey), charming, considerate and with a beard that is well on its way to authentic sea dog status. He works on board with his aunt, Ciara (Olwyn Fouéré), who looks old enough to be his granny but nevertheless has a mean right hook. The skipper is married to Freya (Connie Nielsen), whom he describes as a Viking. They have money problems. Their last catch was a non-event. If they do not land some fish, they may as well sell the boat (pronounced boo-at). The two guys below deck have not been paid for the last trip. Sudi (Elie Bouakaze) designed the boat’s water filtration system. ‘Why are you working here?’ Siobhan asks with characteristic directness. Sudi is evasive; his wife is pregnant. Omid (Ardalan Esmaili) is the final member of the crew. He does not have a back story. To misquote the Talking Heads song, ‘Life During Wartime’, ‘Tore up my back story/What good is back story? It won’t help you survive.’

Siobhan is considered bad luck: she is a red head. The crew shake their heads in disbelief. However, they cannot kick her off. ‘We’ve spent her fare,’ confesses Gerard. Siobhan decides to wear her woolly hat in an attempt not to antagonise the others. ‘Cold, are you?’ asks Ciara. Siobhan explains. ‘Take that off. We might as well get used to you,’ Ciara concedes with the veneer of pragmatism. 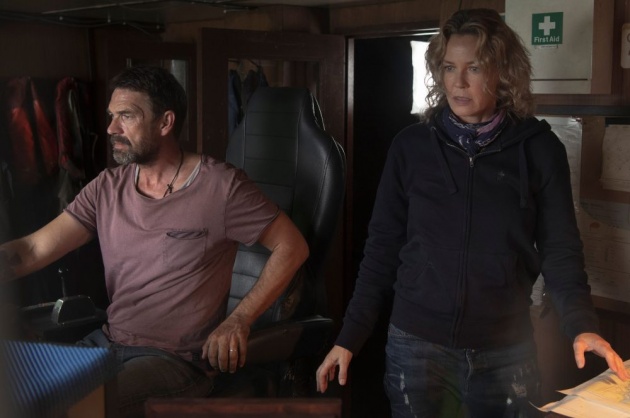 Hardiman shows us the end of the film at the beginning: a young woman plunging into the water, complete with atmospheric audio ripples, even though you cannot hear anything underwater. She also serves up the classic horror movie trope – the change of direction. The skipper is told to avoid an exclusion zone. However, when at least four members of the crew are not paying attention – there are only four bunks – and when Johnny and Siobhan are about to kiss, he steers the boat right into it.

Let us be logical for a second. If you have an exclusion zone, then you ought to have somebody patrolling it. Not so here. The Niamh Cinn Oir gets a great big shake. Something is working through the hull of the ship, dripping a green-blue jelly that resembles my King of Shaves shaving gel - after this observation, I could not take it seriously.  Investigating the ooze close-up, Johnny has a close encounter of the Alien kind – sea spaff. He appears to be OK. It is only shaving gel. Nevertheless, Siobhan is dispatched in her wet suit to take a closer look; to prize off the over-enthusiastic sea urchins who have taken a shine to the ship. That shine is literal, for the creature’s tentacles glow under water like a star fish. One of its tentacles opens behind Siobhan’s head to reveal itself to be a cross between Audrey II from Little Shop of Horrors and the creature from James Cameron’s The Abyss. Siobhan instinctively avoids it. It makes a hissing sound, which it really would not do underwater.

This scene is indicative of Hardiman’s non-committal attitude to the monster movie genre. She does not want to give us jump scares, more ‘ooh, look - that’s really nasty’. Siobhan peels one of the tentacles off the boat, not before catching a glimpse of the great big eye staring up at her. Actually, the tentacles resemble decorations that you would have for a disco rather than limbs of a creature securing a grip on a boat – you expect the creature’s head to be pressed against the hull of the boat. Maybe the creature just wants to hold the boat’s hand or to probe it tentatively in that second date, ‘s/he might really like me’, kind of way.

The crew thump on the hull to tell Siobhan to stop the extraction exercise – the boat is leaking. She returns. They are stuck. They see a yacht in the distance, in the manner of Dead Calm. Siobhan, Gerard and Johnny investigate. The crew are below deck, at least one of them with their eyes removed. ‘Sea fever’ concludes Gerard. ‘Don’t tell the others.’ Siobhan notes that the radio does not work.

What is a yacht doing in the exclusion zone? In a Hollywood monster movie, we might find out, that they are scientists with important data or else looking for the remains of a German U Boat sunk during World War Two. No sooner do they get back to the ship, that the creature lets them go. They finally get a catch and then we have the equivalent of the ‘chest bursting’ scene from Alien. 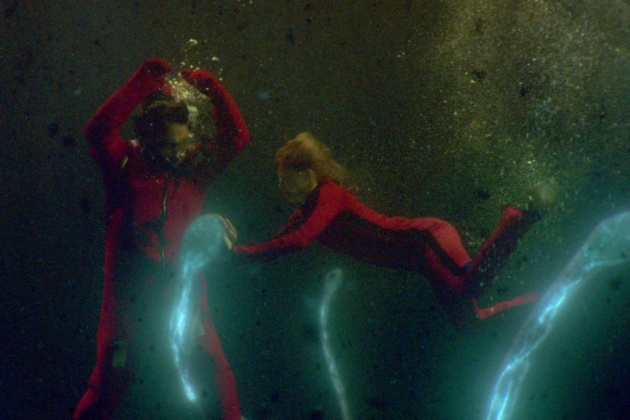 The rest of the film features scenes you might remember from other monster movies, including the test to see if other crew members are infected (shades of John Carpenter’s remake of The Thing) and the boat being sabotaged so that there is no chance of bringing the infestation back to the mainland. Part of the creature is trapped in a box inside the ship. There is also an attempt to run an electric current through the boat to rid itself of traces of the creature. There is also a shower scene (shades of Squirm) during which we learn that the creature has got into the water filtration system.

In a regular monster movie, there would be a concerted effort to kill the creature – after all, to quote the animated film, Home, it waves its tentacles in the air like it just does not care. However, Siobhan wants to liberate it. At this point, one crew member abandons ship and tells the others they can do what they want. ‘It’s just a boat.’ There is a big finish but then another crew member confesses that they cannot swim. There is also ‘the big sacrifice’ – shades of Alien 3.

After that moment, reflective music kicks in – a song on the soundtrack – and instead of experiencing the relief of tension, you groan. The filmmaker has not found the right note on which to end the drama. Hardiman has developed the film since 2015 and she has clearly been advised by people who have encouraged her to repeat genre beats. The hype behind the film, screened at the 2019 Toronto International Film Festival, is that it is original. It is certainly bold for an Irish film, which generally oscillate between whimsy and gritty dramas. However, if you are going to do genre, you really need to subvert expectations more than Hardiman does here, as well as give the audience pleasure. 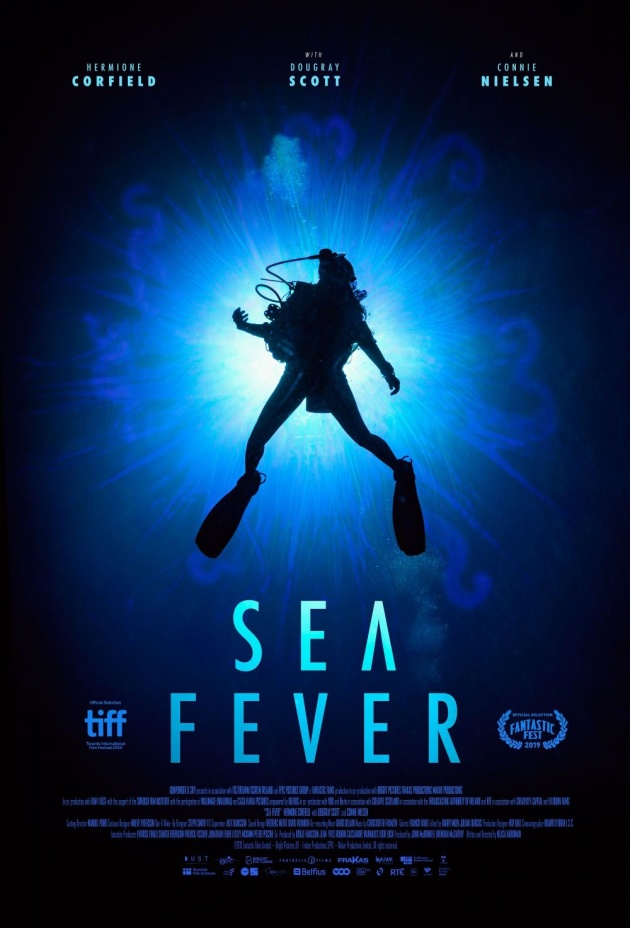