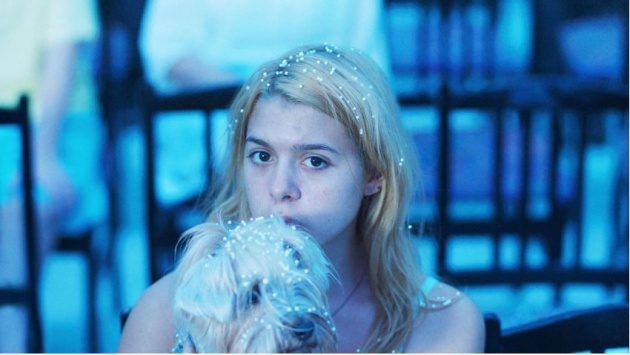 During a toilet break on a coach journey, Alma (Sara Luna Zorič), the teenage hero of Holland-based, Bosnian-born writer-director Ena Sendijarevič’s debut feature, Take Me Somewhere Nice, stares out at the landscape. It takes us a while to register, but Alma has not seen mountains before. She grew up in the Netherlands with her mother – all flat landscapes. Having flown to Sarajevo to visit her sick father in hospital in Podveležje 138 kilometres away, she receives no help from her sullen wheeler-dealer cousin, Emir (Ernad Prnjavoric); he picks her up from the airport, shows her his apartment, with nothing in the fridge but stacked water bottles and a single orange, which Alma squeezes maliciously, but then leaves her to entertain herself. The coach departs without her. Unlike Alma, the audience knows the danger – coach drivers never wait. She is left walking down a B road, until a passing driver (Jasna Duričič) picks her up.

Alma has no relationship with the country of her parents’ birth. She met her cousin Emir only when they were kids. (They have matching molars.) Why is she making the journey? Did her father ask for her? Sendijarevič does not go into details. The biggest surprise about Alma is that she kisses a boy, in this case Emir’s ‘intern’ Denis (Lazar Dragojević) barely twenty-four hours after meeting him, which is fast even by movie standards. Denis is kind to her – he finds her slumped outside Emir’s front door after Alma went out without a key to see the city, taste Hibiscus-rose fruit juice and get her hair dyed. We see Alma practice pronouncing certain phrases in Bosnian with her mother in an early scene in which they both sunbathe before being interrupted by their Dutch neighbour, whose head pops through the shrubbery. ‘Going anywhere?’ he asks ‘Yes,’ says Alma. ‘No,’ says her mother (Sanja Burič). ‘Can I use my card?’ says Alma trying to perfect her pronunciation.

Alma is not enthusiastic about living in the Netherlands, describing the people as ‘cold’.  This is an unreliable description, since we sense that Alma’s mother is the cold one, not wishing to join her daughter on her first trip to Bosnia. They embrace outside the pedestrian entrance to the airport as two automatic doors spin behind them. Sendijarevič’s framing is very precise – well, precise in the sense that the aspect ratio (screen length to height) is reduced (4:3) and figures are often low in the frame, to emphasise estrangement. Sendijarevič and her Dutch director of photography, Emo Weemhoff, foreground emptiness. Even when Alma arrives at Sarajevo airport and there is only one car in the parking lot, she has a hard time seeing Emir. He is lying on the back seat, attending to something or other. 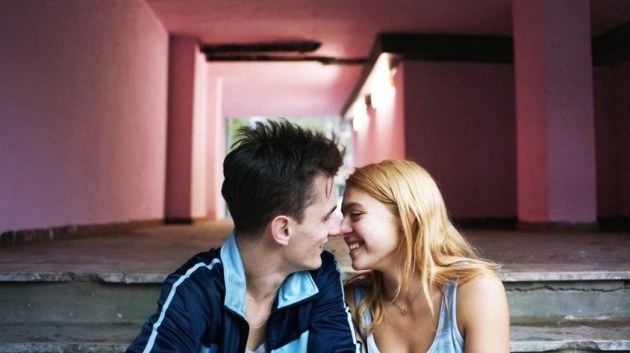 By his own admission, Emir does not have time for his cousin. He will not drive her to Podveležje nor even help her with her luggage. Alma climbs multiple flights of stairs with a heavy bag and only finds out she has reached his apartment by finding an open door. He describes himself as in a hurry. Alma naïvely expects him to be back at the apartment when she returns. No such luck. He leaves her to struggle with the security lock on her suitcase, which she fails to breach. At least, Denis is slightly more helpful – he has a go. Later, he and Alma have sex in a moving elevator – we watch them reflected in the ceiling mirror. She is not a prude, though she also seems to boast an invisible handbag, containing her phone and purse.

In interviews, Sendijarevič describes herself as interested in surprise rather than suspense. In her case, it is not about subverting expectations that she first creates, rather introducing characters at random intervals. This includes a politician whom Alma meets a hotel, where she cannot afford to pay the bill. By this point, her phantom handbag (we do not see it, but she must have one) contains only her phone, her money apparently being in her suitcase – the one she cannot open. Confused? Do not worry. The film has so many deus es machinae, Sendijarevič must believe in the Greek Gods.

Alma is prepared to share a blue cocktail with the politician – the colour matches her lilac dress which, in a previous scene, she washes in the hotel pool. The politician describes her as a ‘scared little girl’, but Alma is not scared. She is trying to reach her father and retrieve her lost suitcase by any means necessary.

Emir and Denis do turn up to help her, miraculously appearing at the hotel. Alma must have texted them, then not expected a reply. ‘I have a ride,’ she insists, fending Emir off with a plastic lounge chair as he shimmies up the hotel drainpipe. Her savour – and as we discover, club singer – throws a shoe at him. Eventually, though Alma does travel with them – Emir’s skills include stake outs – but first they must go to the bus station, where a case has been left.

This – like the club singer before it – is another deus es machina. There is a difference between surprise and contrivance. The case contains something that the trio later use. They go to the hospital in Podveležje and make an unpleasant but not altogether unexpected discovery, which they elicit from another patient. (Why not ask hospital administration?)

This leads to a thawing of relations between Emir and Alma. He teaches her to drive. Alma accuses him of being a nationalist. ‘I’m not. I’m a patriot,’ explains Emir. ‘What’s the difference?’ ‘Nationalists act out of hate. A patriot acts out of love.’ In a night drive, they argue. Alma tells them to get out of the car. (She has a reason to do this, but no spoilers.) When they refuse, she jumps out. Emir pursues her and the cousins share an intimate moment that both have been putting off since they first met. 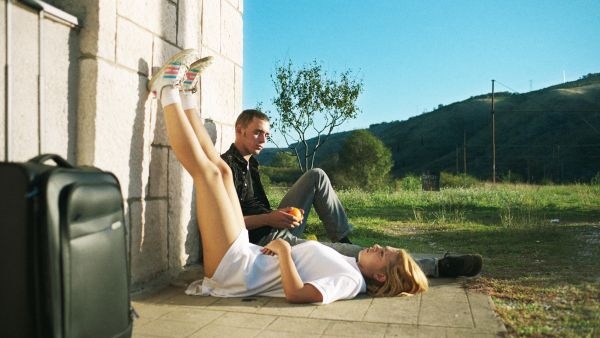 There are some issues that are not discussed, for instance, a sense of guilt for impeding Alma’s journey. This may be a Balkan thing. Towards the end of the film, Alma, Denis and Emir (plus the dog) watch a magic show. Alma is chosen as the volunteer to be cut in half in the magician’s box. Before this happens, it starts to snow inside the theatre – Sendijarevič indulges in some magic realism. In the magician’s box, Alma stares at her wiggling feet and we wonder, as in a real magic act, how the trick is done.

In the finale, Alma and Denis get intimate for a second time. Emir warned Alma that Denis has a girlfriend and he sees her as a passport. In one of the few scenes not to feature Alma, we see Denis (with Emir) outside a club trying to capture the attention of some German girls. Alma is quite rude to Denis – she has good reason to be sulky – claiming that in Holland, he would be considered ‘another mouth to feed’. At a beach, they are interrupted by two men asking, ‘who gave you permission to use our lounge chairs?’ They beat Denis up as Alma retreats into the sea with the dog perched on her head. They leave. She tends to him. They get intimate on her instigation. Then she washes thighs in the sea. Where is Emir?

The title, Take Me Somewhere Nice, does not accurately describe the film, since it is not an ironic holiday movie. Rather it is a joke at the expectations of the audience to be taken in a youth movie to a happy place. By her own admission, Sendijarevič does not do social realism. She is not interested in victims either. Yet there is a sense that Emir and Denis have limited opportunities. Emir is grumpy and resentful; he asks why Alma came to the country at all. The question is not adequately answered. Denis is more jovial. He likes being helpful, announces with a smile that he has dumped his girlfriend (‘it turns out that we were not compatible after all’) and is better at pool than Emir in a bet. (‘If I win, we drive Alma.’) Alma is not assisted by those in a position to help her, like the lady in the bus station who does not confirm the information that Alma has on her phone. ‘If it’s on there, it must be right.’) Alma finds herself sitting in the aisle on the bus for an ambiguous reason. Sendijarevič does not explain everything. We sense though that she could not use her card to pay for a ticket and was treated as a second-class passenger. However, all the passengers are treated as second class. They demand a bathroom break. Which takes us to the beginning of this review.

At the start, there are three curtains over which the credits appear. There appears to be a figure behind them, but I was not certain. I did not immediately perceive it, but uncertainty – in particular, youthful uncertainty – is the film’s theme. The characters do not drive the action. Events occur in a haphazard manner. Emotions too are also uncertain. Alma describes herself as liking men with muscles who could be her protector, but neither Denis nor Emir fit the bill. Emir describes himself as busy but has time to play pool. The club singer illustrates an attitude towards life, moving from place to place, occasionally selling herself. ‘An artist, a prostitute – what’s the difference?’ I believe Sendijarevič knows that difference. An artist does something they love for money; a prostitute sells the simulation of love to get by. 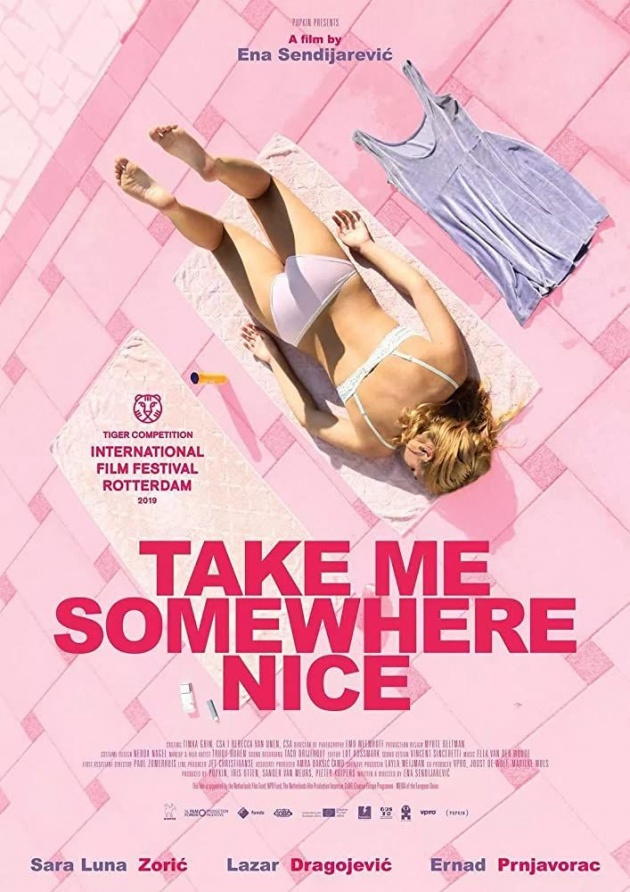 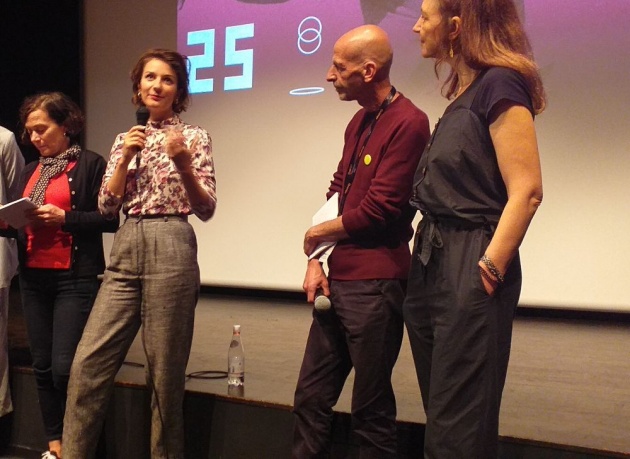