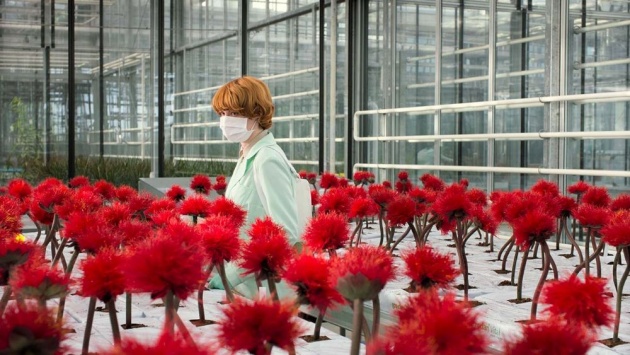 The spiralling overhead shot that begins Jessica Hausner’s film, Little Joe, introduces us to the central clash in the director’s first English language feature, between the colours blue and red. Blue is the colour of the flower ‘Flash Two’, a thriving species. Red is the colour of the flower bred by Alice Woodard (Emily Beecham), a carrot-haired, buttoned-up floriculturist, who has created a plant that ‘requires warmth, cold and talking to’ but emits a scent that will make people happy ‘as a reward for all that hard work’.

Hoping to enter it into an upcoming flower fair, Alice brings a sample home and keeps it under a blue lamp, calling it ‘Little Joe’, Joe being the name of her schoolboy son (Kit Connor). She is separated from Joe’s father, Ivan (Sebastian Hülk) who lives ‘in the wild’. (The dialogue is sometimes stilted.) Alice has a colleague, Chris (Ben Whishaw) who admires her work. They share the same taste in plain clothes, though unlike Alice, Chris’s shirts have a pattern and Chris wears his top button undone. Alice may be a talented breeder recently recruited to Planthouse Biotechnologies, but she also sees a psychiatrist (Lindsay Duncan) who, in every scene in which she appears, wears a different, busy floral top. The psychiatrist appears to prefer plants as a decoration for her throw cushions. She could also be said to go into the weeds with her patients.

Co-writing the script with her frequent collaborator, Géraldine Bajard, Hausner is obsessed with understanding love, not the protective love of a mother for her child, but love as a necessity for getting through the day. Her last film, Amour Fou, was a period drama about a writer, Heinrich (Christian Friedel) who desperately sought a woman with whom he could commit suicide. Love is a great leap, a feeling that overcomes us that has no basis in logic but is frequently confused with desire. We desire others. Then we learn to live with them in a form of mutually acceptable compromise. 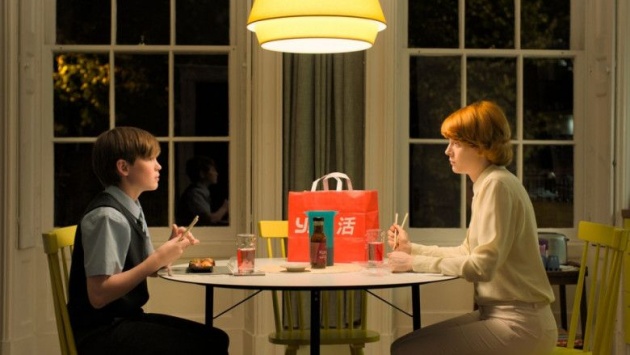 Joe is quite keen for Alice and Chris to get together, as he explains over a takeout meal from Yo Sushi. They have something in common – their work. Chris likes Alice. In Joe’s schoolboy mind, this is enough for them to get together. Alice is not keen. She uses Joe as an excuse not to go for a drink with Chris. When Joe visits his father for a fishing trip – Joe’s rod is red, his father’s rod is blue, as is his father’s Land Rover – Alice goes to the pub with him. Chris plants an assertive kiss on her lips, but Alice is unstimulated. She notices that her son’s behaviour is changing, having come into close contact with Little Joe.

The biologically engineered flower has a deliberate design restriction: it cannot reproduce. However, it nevertheless still possesses the will to survive. To this end, Little Joe makes people fall for it, to preserve its being. It even ends the lives of the entire Flash Two crop, much to the chagrin of Alice’s colleague, Karl (David Wilmot), literally steaming up the windows in the temperature-controlled glasshouse. Irishman Karl, incidentally, is one of the few characters who wears his light green lab coat loosely, revealing a t-shirt underneath advertising ‘Big Don’s Famous Magic Blend’ in red letters. Karl wears the shirt to work in most of his scenes, which might say something about the film’s wardrobe budget. Only Hausner exercises a clinical control over what is in the frame. When her camera zooms in, it might even partially exclude the main actors, like a surveillance camera focusing on an area, not a moving subject. Indeed, at the end of the film, the lettering on Karl’s shirt changes from red to blue. 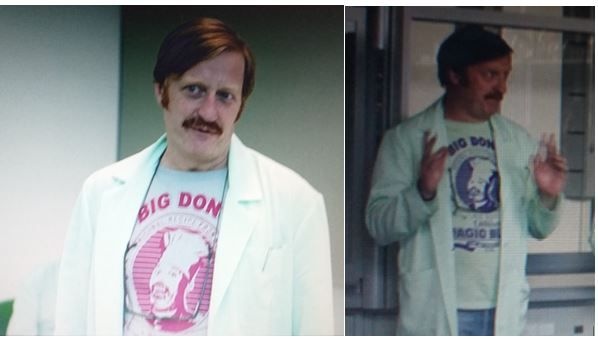 Joe is keen for his mother to take him to a movie. Alice has work. She also has a colleague, Bella (Kerry Fox) who takes her dog Bellow with her to work. Bella has given her dog a small scarf to wear; it is like a triangular bib. Early on, Chris plays fetch with Bellow, throwing a red sponge ball to the other end of the laboratory corridor; Bellow chases the ball enthusiastically. However, Bellow enters the lab and encounters the red plant. The dog is never the same again, barking and growling at Bella. Later, she tells her colleagues that she had Bellow put down; ‘that’s not my dog,’ she explains.

Bellow is not the only one who has a chemical reaction to the flower. Joe does also. At one point, during which the red lighting suggests a horror movie, Joe steals Alice’s pass card and meets with his classmate Selma (Jessie Mae Alonso). Correctly guessing his mother’s password, Joe introduces Selma to the flower. The flower is described as sexy. The next day, staff are shown the security footage – evidence of an intrusion. Alice recognises her son’s schoolbag.

Hausner did not employ a composer to supply an original soundtrack; she used pieces of music by the Japanese composer Teiji Ito – ‘Running’, ‘Summer’ and ‘Nightmare’ from Ito’s album, ‘Watermill’. At certain points, we hear a sine signal and then, suddenly, dogs barking, representing the disturbance caused by the flower. The dogs on the soundtrack have a point; the flower is stealing love from their human owners, making dogs and their tricks redundant.

The only other piece of music in the film is a song, ‘Happinessbusiness’ by Markus Binder, a throwback to German techno-pop – the lead singer has his voice distorted. The song encapsulates the theme of the film, even if it is rather on-the-nose.

The clash between red and blue represents passion verses indifference. The characters are contradictory. Alice creates a red flower, but is distant and practical, leaving no time to enjoy life. Karl wears a tee shirt with red lettering at moments when he is sceptical about Alice’s work. He wears his tee shirt with blue lettering when he is fully under the control of Little Joe. The flower has a displacing function. Its scent does not have a permanent effect. At the climax, Bella finds Bellow’s red ball next to a row of Little Joes. She takes the ball in her hand and slowly starts to cry, convulsing into being. Kerry Fox’s performance is terrific, articulating Bella’s anger at her loss in the staff canteen. When two colleagues lead her out, Alice intervenes. A younger colleague Ric (Phénix Brossard) blocks Alice’s path, until she knocks over his tray.

This is not the only moment of drama. Earlier, Ric asks Bella to water the plants at night. His girlfriend has been in an accident and he needs to see her. Bella finds herself locked in with the rows of Little Joes, only escaping through a glass panel high up, that can be opened like a window. 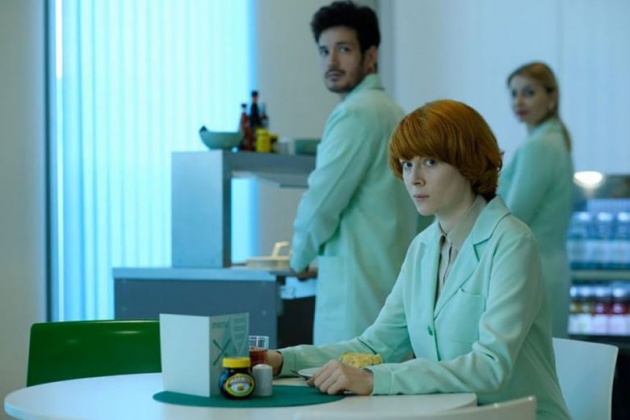 Tensions also flare between Alice and Joe and Alice and Chris. In two instances, Alice ends up sustaining an injury to her head. Joe breaks into Alice’s workplace to get a Little Joe for Ivan (he does not refer to him as Dad). By the end of the film, the flower is gifted to another supporting character.

There are moments of tension, but also comedy as Alice watches videos of the focus group of families who were given the plant. A wife complains that her husband was far more pleasant once the flower was introduced to him; she doesn’t like it. A mother explains that she only became a test subject so that her daughter could get money for a bike. During the interview scenes, the only constant is a glass model of a Japanese cat, with its dipping paw, standing on top of a set of office drawers.

Alice created Little Joe without the means to reproduce for a purpose: to ensure that it did not spread and cause harm to others. Although she does not admit it, she wanted to create something that could be easily controlled; to be submissive. Hausner makes the point that nothing we create can be wholly compliant. Alice ends up saying goodbye to her son. Hausner also makes the point that we are drawn to human substitutes, to be in transactional relationships of giving and receiving. Alice does not share her life with her son anymore, but she does have his dinosaur picture attached to the fridge. Red and blue may be in conflict, but they ought to happily co-exist. In UK politics, these colours represent opposing ends of the spectrum: socialism (red) verses conservative capitalism (blue). The socialising flower here is dehumanising. There is the inference that socialism too is unnatural.