Pictured: Angela aka 'Queen' (Jodie Turner-Smith) and Ernest aka 'Slim' (Daniel Kaluuya) look behind them in the couple-on-the-run road movie, 'Queen and Slim', written by Lena Waithe and directed by Melina Matsoukas. Still courtesy of Universal Pictures (US), Entertainment One (UK)

There will be a point – and we are almost there – at which singling out a film because it is directed by a woman will no longer be necessary. I propose a benchmark: a twelve-month period in which five films directed by women gross $100 million at the domestic US box office. At that moment, there will be no case to answer. Women directors will have proven themselves capable of marshalling large budgets, being able to produce popular films (not just critically acclaimed ones) and earning millions of dollars for the studios that either produce or acquire the movie. This year, Amy Pascal of Sony Pictures, is seeing the fruits of greenlighting films helmed by Elizabeth Banks, Greta Gerwig and Marielle Heller that might just join Lorene Scafaria’s Hustlers in the $100 million club. Whilst Heller’s A Beautiful Day in the Neighbourhood, starring Tom Hanks as nice-guy entertainer Fred Rogers, has made a strong start ($13 million opening weekend), Banks’ Charlie’s Angels reboot has been a box-office disaster. We’ll find out if Gerwig’s take on Louise May Alcott’s Little Women is a crowd-pleaser around Christmas time.

Then we have Queen and Slim, written by Lena Waithe and directed by Melina Matsoukas, which is an unashamed B-movie - disreputable, morally reprehensible but necessary – and a potential sleeper hit (it has grossed $19.4 million in its first nine days of release). It is the ultimate Frozen 2 counter-programmer, a film for adults with a largely black (African American) cast. It begins with a bad date. Lawyer Angela Johnson (Jodie Turner-Smith) has just lost a case in which her client has been executed. Using an unnamed dating app, she has hooked up with Ernest (Daniel Kaluuya) who has taken her to a diner. Angela hates it that the waitress got Ernest’s order wrong – he asked for scrambled eggs. Ernest doesn’t mind. Matsoukas shows the couple at their table occupying only one half of the screen. This is a technique familiar from horror movies. Empty space (on screen) makes us feel uneasy. Nothing horrifying happens here, though – it is a black-owned business, Ernest explains, accounting for his decision to take her there. The horrifying part happens on the drive back. Angela and Ernest have no intention of seeing each other again. Whilst on the road, during a genial conversation, the car swerves, attracting the attention of a white cop. He pulls them over and takes Ernest’s licence and registration, which for the purposes of this movie is one document. By the end of their encounter, in which the couple are outside their car and Angela is attempting to record the incident with her cell phone, Angela is shot in her leg and Ernest shoots the cop dead.

At this point, you might expect that they would turn themselves in and Angela would defend them. The cop, after all, was antagonistic and the stopping of Ernest’s car seemed racially motivated. But instead Angela and Ernest go on the run. They don’t expect justice; after all, this is America.

You might expect a commercial ‘mainstream’ movie to preach aspirational politics, in which characters achieve their goals virtuously. Not so here. Do you know how many people saw The Hate U Give, another film about a cop shooting and the struggle for justice by a virtuous schoolgirl? Not enough. The America of 2019 is a country where the heroes behave as disreputably as the establishment, but with better cause, because they have a limited means of defence. This, however, is a dangerous tactic, because it allows the establishment to demonise them, to call them un-American. 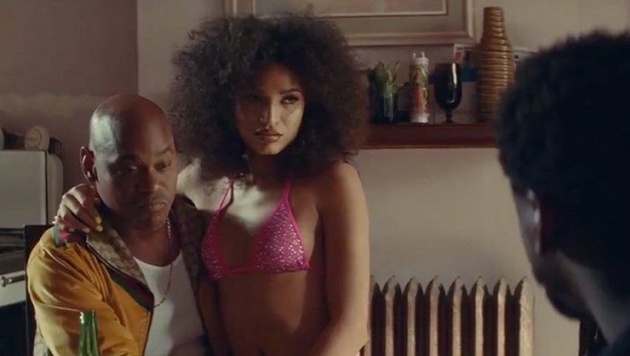 Pictured: Uncle Earl (Bokeem Woodbine) and friend in 'Queen and Slim', a couple-on-the-run movie written by Lena Waithe and directed by Melina Matsoukas. Still courtesy of Universal Pictures (US), Entertainment One (UK)

Whilst on the run, with her leg in a makeshift tourniquet, Angela makes all the key decisions, heading to her Uncle Earl’s house where she demands a place to stay, a car and some money – but not all at once. Earl (Bokeem Woodbine) also gives her name of someone who can help. Ernest watches his car – and the shoes in the trunk – burn. For the most part, the couple have no cash. You note though that every stop includes the question, ‘want something to eat?’

Ernest learns that Angela cut her lawyer teeth by defending her father after he killed her mother. It was an accident. They were arguing and Angela’s mother fell down the stairs. Angela trained herself in dispassion but hates where she came from when she and Ernest overhear Earl argue with his scantily clad female companion over a missing ring. Why would the woman take it?

The loaner car runs out of gas and the couple are helped by a kindly white off-duty sheriff. The man is so kind that he even offers to buy them gasoline and a plastic jug. Once Ernest sees his badge, he points a gun at the sheriff and locks him in the boot of their car, taking the sheriff’s truck. This eventually overheats.

There is also an early scene where the couple end up in a garage and Ernest points a gun at the teller. ‘I’ll let you have gas for free if you let me hold it,’ the teller explains, apparently bored by his McJob. Inexplicably, Ernest hands over the gun. The teller points it at Ernest. ‘What are you doing?’ he asks, then allows his voice to rise in a panic. ‘What are you doing? What are you doing?’ Clearly not allowing Kaluuya to get an acting award nomination. Surprisingly, the teller is as good as his southern-twanged word.

The couple take the car to a garage. The owner says it will cost $2,500 to repair. He knows who they are. Ernest continues his support of black-owned businesses by not haggling too much over the price. A young boy, Junior (Jahi Di’Allo Winston) who hangs around the garage takes Ernest and Angela’s picture. 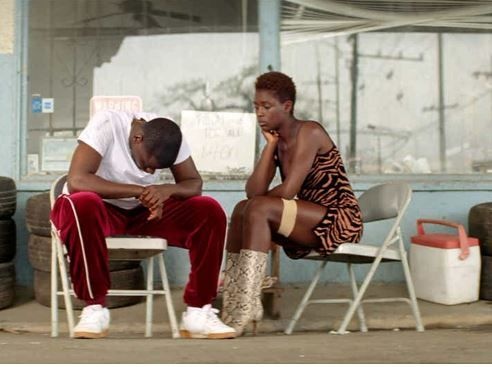 Matsoukas and Waithe know that the audience needs incident to stay interested - earlier we had the ‘change our appearance beard shave and haircut’ scene. Ernest decides to take Angela dancing. They enter a bar where all eyes are fixed on them as if they were Beyoncé Knowles and Jay-Z just swinging by for a visit. Ernest goes to the bar to get a drink for Angela. He doesn’t drink himself, but the bartender gives him two glasses – and on the house too. Ernest swigs his drink alongside Angela. Theirs is a desperate situation.

Shooting a cop after the police officer shot first and locking a sheriff in the trunk (in the UK we say boot) may be reprehensible, but Matsoukas and Waithe push the envelope further – and there’s a money shot in it. Matsoukas cuts between Ernest and Angela having sex in the car – and there is female nudity, no politically-correct hiding of breasts – and Junior, the young boy who took their picture standing up to police during a demonstration. The officer is black and kindly. Junior points a gun at him and then – as if inspired by Angela and Ernest – shoots. This is a statement. No police officer can be treated as benign. They are all the enemy.

This is an ‘I can’t believe they showed that’ moment – a transgression. However, to show how far race relations in America has declined post-Obama, it isn’t enough to lament. You show characters driven to action. Interestingly, though, Matsoukas didn’t show a girl pulling the trigger. She conforms to gender stereotypes. Boys are used to holding guns. Of course, they must discharge them. The teller in the garage on the other hand – he’s not a man (or so it is inferred).

The ending of Queen and Slim is inevitable. The couple may be obsessed with ‘a body of water’ – crossing the ocean to get to Cuba (where they can really stretch their lack of funds). We know the police will catch up with them, but not how. There is a $250,000 bounty on each of their heads. What sort of person would betray them?

There is a white couple, Mr and Mrs Shepherd (Flea, Chloë Sevigny) who prove quite helpful, owning a guest bedroom with a secret compartment spacious enough for two – so Angela and Ernest evade police detection. Ernest’s father also won’t give them away – Ernest doesn’t heed Angela’s advice and phones home; after all his name begins with an ‘E’ and ends with a ‘T’.

In the time-honoured tradition of B-movies, the subversive stuff is all in the middle of the movie – the meat of the sandwich. It plays to a black audience. Matsoukas and Waithe anticipate hoots and hollers and even, during sequences when the couple are on the road, their audience snacking whilst watching (‘want something to eat’).

Ernest and Angela live their relationship to the full – within certain parameters. Angela hangs out of the window as their car passes over a bridge and then invites Ernest to do the same. His grip isn’t as firm as Angela’s, but he steadies himself and catches the wind.

In the film’s final image there is an evocation of Bonnie and Clyde. The couple, Angela and Ernest, the Queen and Slim of the title, acquire gangster chic. It is nice to imagine that, fifty years from now, Daniel Kaluuya will announce the Best Picture winner and name the wrong movie.