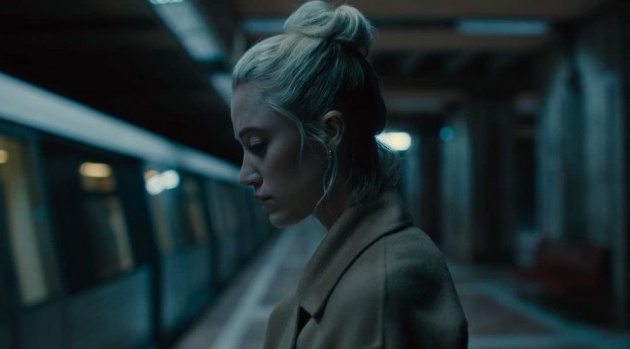 Watcher is a serial killer thriller with the exploitation taken out. Reworking a script by Zack Ford, writer-director Chloe Okuno delivers suspense, the obligatory dream sequence, a false shock or two before working towards a climax that doesn’t make a heap of narrative sense. The film’s most radical element is not to allow the viewer any vicarious pleasure as the killer attacks their victims. The drama portrays a wider societal anxiety, that women who speak out about menacing male behaviour aren’t believed. It also offers tourist views of the Romanian city of Bucharest, where the film is set. Beyond that and a sympathetic central performance from Maika Monroe as Julia, a former actress in transition who has followed her Romanian-speaking boyfriend, Francis (Karl Glusman) to Bucharest, it doesn’t offer much pleasure to audiences. To damn it with faint praise, it is a horror film you can watch without getting too irritated.

It begins with street sounds before we see Julia staring out of the window of a moving taxi. This is a familiar trope: the protagonist separated from the outside world. Francis is speaking to the driver in Romanian. The driver looks at Julia through his rear-view mirror and makes a comment. ‘What is he saying?’ asks Julia. ‘He says you’re beautiful,’ replies Francis. Slightly uncomfortable, Julia nestles into her boyfriend in the back seat. The couple arrive at an apartment building. They carry their cases inside. The main light won’t go on. Francis switches on a lamp. The sitting room is vast and adjoins the bedroom. Julia lies down on the sofa. There are no curtains on the windows. The camera withdraws as Francis joins Julia and they commence lovemaking. The title is superimposed over the image of their coupling as seen from the outside.

Who exactly is the watcher? Julia is watchful. In an early scene, she begs Francis to wake her up before he goes to work. He doesn’t do so, instead leaving her to discover his WhatsApp message, a picture of herself sleeping and the comment, ‘you looked so peaceful’. Julia is left to wander around the city by herself. She has a cup of coffee. She tries to take a picture inside an ornate building, but the security guard objects. None of the Romanian is translated so we experience Julia’s perspective, only understanding the tone and not the words themselves.

In another early scene, Julia comes across a crime scene. She asks one of the gathered mob what is going on. ‘A woman has been murdered.’

On the way back from her sightseeing, Julia finds her front door is open. A woman and an electrician are inside. The latter has fixed the light. Julia joins Francis for a meal with his colleague, who makes fun of Francis’ linguistic mistake earlier that day. Francis was born in Romania but grew up in America. He can speak both languages. We don’t know exactly what he does for a living – perhaps sales – but it hardly matters. At any rate, he has been put in his place. Julia and Francis are told about the serial killer dubbed ‘the Spider’. He slashes women’s necks with a knife, but applied so much pressure that in one instance, he decapitated them. Okuno resists a shot of Julia putting her hand to her own neck.

Staring out of the window of the apartment, Julia looks up and sees a figure in shadow staring back at her, stock still.

Julia becomes steadily more disturbed. She visits a cinema to watch the Cary Grant-Audrey Hepburn picture, Charade. She has a better experience with an old movie than Olivia Colman’s character in The Lost Daughter. However, a man sits directly behind her, then leans forward. Julia gets out of her seat and flees the cinema. She escapes to a supermarket and picks out a jar of gherkins. She sees a man again. She drops the jar, which shatters on the ground. Gherkins spread everywhere. Julia escapes to a storage area, staring through a window back inside the store, The man steps on one gherkin and stares back at her. Julia is chilled. An employee inside the storage room calls to Julia, startling her. ‘How can I get out of here?’ she asks. The employee directs her to the back door.

Julia persuades Francis to return with her to the supermarket to review the security footage. ‘They thought you were trying to steal something,’ Francis explains. Finding an image of the man staring at Julia, she takes a picture of him with her phone. She reports the man to the police. A (male) police officer and Francis go to the building opposite and (we assume) speak to the occupant. Francis returns and says nothing. The inference is clear. There is no problem; Julia is being paranoid. 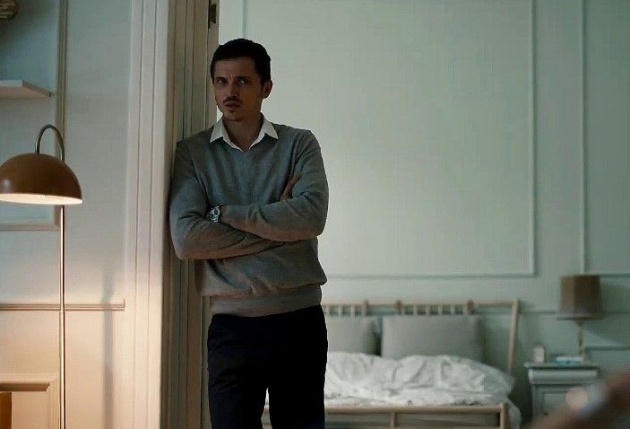 At home alone most evenings, Julia meets two of her neighbours. The first is an old woman who hammers on her door, looking for her cat Elvis. Julia has no idea what the old woman is saying. The second is her young neighbour, Irina (Madalina Anea), who lives in the apartment next door. She explains the old woman’s concerns, before inviting Julia inside. ‘I hate drinking alone,’ she explains.

Whilst inside, there is a hammering on the door – there are no doorbells in the building, I guess to save on electricity. ‘It’s my ex,’ explains Irina. His thumps and shouts are disturbing. ‘He’s a nice guy really,’ she adds. Irina explains that she has a gun to ward off intruders and shows it to Julia. You know what they say about guns? Shown in Act One, goes off in Act Five.

Julia has identified the man who followed her but not connected him to the figure in the window. By chance she sees the brown-coated man (Burn Gorman) in the street and follows him from a discrete distance. He arrives at a building in which water leaks through the skyline. Julia walks down a flight of stairs into a basement. There is a security guy at the door. ‘What is the place?’ Julia asks. ‘It’s a club,’ the security man replies tersely. ‘Can I go inside?’ ‘Sure.’ It is here that the film descends into cliché, with Julia discovering scantily dressed women dancing in glass booths. She continues to look for the man who followed her and sees him with a mop. Sensing he is being looked at it, he turns his head. Julia backs away. Just then, her name is called. It is Irina from one of the booths, dressed in black underwear.

The idea that young women of Irina’s age can only get jobs as exotic dancers in a foreign city is a huge generalization. Julia asks Irina about the cleaner. ‘They come and go all the time. I don’t really know him.’ She explains that she was followed. Irina has to go back to work. Julia leaves.

Francis and Julia’s apartment now has curtains. The figure in the window continues to look back at her. Julia wonders if he is really looking at her. She raises her hand as if in greeting. No response. As she is about to look away, the figure raises his hand in reply. 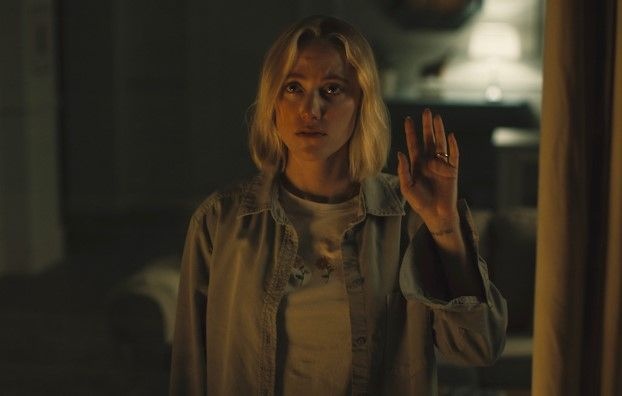 Julia hears a noise from Irina’s apartment – a violent crash. She runs out and knocks on the door. No reply. The neighbours appear. Julia is frantic. Eventually, the door is opened. A lamp lies smashed on the floor. Elvis (the cat) leaves the building, sorry, the apartment. The next morning, Francis contends with complaints. The landlord doesn’t want troublemakers in the building.

One evening, Julia hears someone else hammering on her neighbour’s door. It is Irina’s ex. He has tried ringing her. No reply. ‘Can I do so?’ asks Julia. The ex-boyfriend shares Irina’s number. Julia calls. Still no answer. Seeing as the man is basically nice, Julia has a favour to ask. She goes with him to the building opposite and asks the man to knock on the so-called watcher’s door. He thumps loudly. No reply. Julia asks him to try again. He hammers at the door and curses. No response. The ex-boyfriend then leaves. Julia decides to try herself. The door opens slowly. There is an old man. Julia moves away from the door but then sees her watcher coming up the stares with a bag of groceries – he is almost always seen with a white plastic bag.

About that dream sequence. Julia imagines herself in her apartment. All of a sudden, her head is covered with what looks like a thick, silky bed sheet. She wakes up.

There is another knock at the door. It is the police, this time accompanied by the watcher himself. He has made a complaint. Julia is stalking him, coming to his home and intimidating his sick father. However, if Julia leaves him alone, he won’t press charges. Julia is forced to shake his hand. Gorman does a good line in stiff dialogue delivery, his face simultaneously in pain and unreadable.

To take Julia’s mind off her mundane existence, Francis invites her to a work cocktail. She drinks by herself until called over. They discuss ‘the spider’; he has been caught.  A comment is made in Romanian that produces a laugh from the assembled group. ‘What did you say?’ asks Julia. Francis’ colleague answers in English, ‘At least you won’t have the spider for company,’ Julia slams her glass so hard on a waiter’s tray that the tray tips over and the glasses shatter on the ground; I felt sorry for the waiter. Julia objects to her paranoia being treated as a joke. Leaving the building by herself, she walks to the nearest subway station in her heels. We fear the worst. She boards a near empty train. The watcher is also on board, carrying yet another white plastic bag. There is a close up; the bag’s contents are made to seem creepy and ominous. Just then the train shudders to a halt. There is a dog on the tracks. ‘How long does it take for the train to move again?’ ‘A few minutes.’ Fortunately, in movie terms, it is a lot shorter. As the train arrives at the next station, Julia makes a run for it.

In the film’s climax, Julia arrives home. She starts packing her case, which she does so with pre-folded clothes that fit into it quite neatly. Once more, she hears a noise next door. She calls Irina. She hears Irina’s phone ring. She rushes out and tries the door to Irina’s apartment. It opens. Julia walks inside…

The suspense that the film delivers is on familiar lines. It is easy to make a foreign city where you don’t speak the language seem threatening. The relationship between Francis and Julia is credible. The serial killer himself is a bit of a cliché; in a subservient relationship but wanting to dominate when his controller isn’t around. This is inferred but not spelt out. The ending is partially bleak – and bloody. The gore isn’t excessive, though I did doubt whether you could decapitate someone with a serrated knife. The film’s pleasures are modest, but there is nothing here that suggests that Okuno is anything more than a competent handler of suspense who doesn’t offend her audience by objectifying her protagonist. 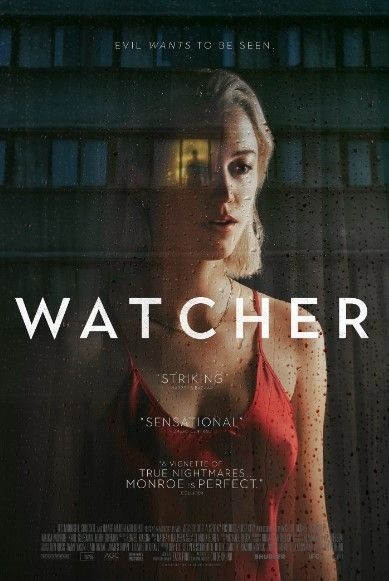