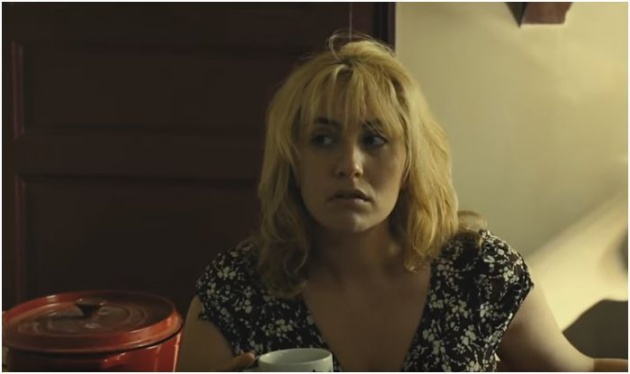 Gaby Baby Doll is the third feature by writer-director Sophie Letourneur after La vie au ranch (aka Chicks) in 2009 and Les Coquillettes in 2012. Letourneur makes films through a combination of script and improvisation, working (up until Gaby Baby Doll at least) with non-professionals. She also takes a role in the film herself.

Gaby Baby Doll is a departure – the first of Letourneur’s films with actors rather than non professionals, in this case singer turned actor Benjamin Biolay (Pourquoi tu pleures, Au Bout de Conte) and actress Lolita Chammah (Farewell, My Queen, Anton Tchékhov 1890). Actors, Letourneur discovered to her horror, don’t like to improvise, that is workshop the script into being, so Letourneur and her brother had to act out scenes as the characters of Gaby and Nicolas before Chammah and Biolay took over.

Letourneur’s previous work dealt with ensembles – ‘groups of people generally have fun’, she explained at a question and answer session. Her films are also urban. Gaby Baby Doll is different, set in the countryside about a young woman, Gaby (Chammah) holidaying with her boyfriend and a group of friends who finds herself abandoned in the holiday home of her psychiatrist tout seule.

Desperate, Gaby works her way through the local men to find someone who will stay with her. Each one finds her weird – it’s not sex she wants but a physical presence, a watchful eye, a sounding board, someone with whom to drink wine and eat chocolate flakes. That’s right, chocolate flakes – don’t judge! Nicolas prefers cornflakes. Very desperate, Gaby gravitates towards Nicolas (Biolay), the bearded recluse who sleeps in a shack, who is nominally the caretaker for a large country estate but bookends his days with long walks and does nothing in between.

Gaby Baby Doll is a comic exploration, or more accurately depiction, as exploration suggests plumbing the depths of the problem, of a fear of being alone. The comedy comes from Gaby’s neediness tempered by trust issues. At one point, Nicolas, who really doesn’t want company and tolerates Gaby extremely reluctantly, asks her to walk down a path alone. Petrified, Gaby refuses to do so, so Nicolas walks ahead, leaving the frightened Gaby to catch up.

Gaby is led to Nicolas partly by the dog (Benji) he has adopted. Gaby cooks for Nicolas the limited food stuffs he has available (pasta, rice) and feeds them to the hound. Nicolas limits his palate to single flavours and products that end in ‘ito’ like Pepito, his favourite cookies. ‘Don’t eat my biscuits,’ he tells Gaby at one point.

Dialogue is fairly minimal – you sense Nicolas is trying to tire Gaby out. When they rest on the grass, Gaby lies back to rest alongside Nicolas – to show that they are in synch. He sits up. He is trying not to encourage her to feel relaxed.

Gaby also starts to feel at home in the countryside, stopping to pee. This is one of the few films to integrate urination into the fabric of the narrative – three times by my count, but why am I counting? Stop that immediately. Gaby tells Nicolas off for watching, though you sense that she wants the attention.

When Gaby and Nicolas stop off at the psychiatrist’s mansion, Nicolas’ appetite for indoors is reawakened. Letourneur does not explain why he lives outside. The film makes a revelation we partly expect.

Naturally, Gaby’s boyfriend reappears but at this point Gaby has come to an understanding. The ending is familiar romantic comedy stuff – misunderstanding followed by a coming together and a song over the end credits.

The refusal to explain the characters marks Letourneur’s comedy from that of a male director. If you put a label on something, you take away the individual. The film is about the proud ownership of one’s dysfunctional psychosis. Is this helpful? Before we understood about autism or borderline personality disorder we judged people by our own standards and found them weird and wanting. With a diagnosis, we could make allowances, develop coping strategies. Without one, we risk reaching for unhelpful labels like ‘imbecile’. There has to be a middle ground between acknowledging a psychological condition and seeing it separately from personality, for example as an optimistic agoraphobic.  Behavioural comedies like Gaby Baby Doll could do more to explore this.