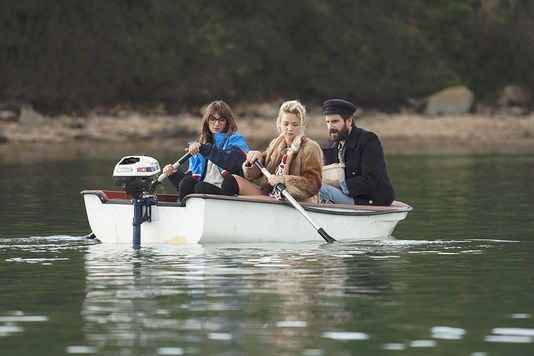 I want to say right off the bat that I am a huge admirer of Lynn Shelton’s Your Sister’s Sister (2011) a comedy drama about a thirty-something man, Jack (Mark Duplass) still hurt after the death of his brother twelve months ago who goes to the summer house owned by his best friend’s father and sleeps with a lesbian (Rosemarie DeWitt).

Shelton’s film made you feel for Jack and the film had something to say about extended family relations that we think will be the answer to everything (‘if only everyone loved each other’) but clearly isn’t. Shelton’s screenplay was a model of concision. I couldn’t think of an element that felt unnecessary, even when Jack, a committed cyclist and one senses doesn’t dig on burning gasoline, trashes his own bike. Especially when Jack trashes his own bike! What’s the point of all this save-the-planet, watch our own carbon footprint nonsense if you still feel messed up inside?

Your Sister’s Sister was about a particular social type, the liberal middle classes, who still have private thoughts and desires but widen the scope of their emotional support, even when the offer of a guest house by Iris (Emily Blunt) isn’t just to give your best friend space.

I can see why producers thought remaking it as a French movie, but writer-director Marion Vernoux has created a film that doesn’t have the weight, precision, economy, up-the-ante tension and cathartic emotional release of the original. C minus, must try harder.

Vernoux is a talented director and she has done something that no other director on my list has done, remade another woman’s movie. Women have remade men’s movies - Nora Ephron’s You’ve Got Mail, updating The Shop around the Corner. Women have tackled previously filmed William Shakespeare plays - Julie Taymor’s The Tempest, which featured Helen Mirren as Prospera. But they have not looked at the work of another woman director – Susan Seidelman, Sally Potter, Margarethe Von Trotta, Kelly Reichardt, Penny Marshall, Maggie Greenwald, Nicole Holofcener, whoever – and thought, you missed something. So hats off to Vernoux for trying.

The distance between the quality of original and remake is no more apparent than in the opening scene. Vernoux translates Shelton’s dialogue into French, so we have exactly the anecdote about the guy who watched Hotel Rwanda and immediately volunteers to work for Doctors without Borders (Medicin Sans Frontiers).

What about the rejoinder in Shelton’s film, that the brother was a bit of a bully and had a second epiphany watching Revenge of the Nerds?

La Haine is not Revenge of the Nerds. It is not a deflation point. Mme Vernoux, you lost me at La Haine.

Now Shelton didn’t have a great deal of money to make her movie, so the next scene in which the grieving brother, Pierrick (Grégoire Ludig) is offered an opportunity to stay in a summer house, takes place in a hallway. Vernoux can afford lights and can secure a permit. Bravo! So her follow-up scene takes place outside in the street.

Question: in whose house is this remembrance of a dead guy taking place? It has to be either Pierrick’s apartment, taken over by well-wishers, or that of his best friend, Tessa (Géraldine Nakache), who lived with Pierrick’s brother until he was hit by a car.

So, Mme Vernoux, why are we outside?

Once Pierrick agrees to some preparation time for his librarian exam in a remote, waterside country house, the film gets on track. Roll titles. Here’s another curiosity – it gets dark real quick. So Pierrick, as in Shelton’s film, arrives at the house at night.

Vernoux’s trump card, her one improvement on Shelton’s film, is the actress Virginie Efira, cast as Marie, Tessa’s half-sister from a different mother. The blonde Efira has the magnetic sort of beauty that would make any heterosexual man stop and stare at her through a window – until she attacks Pierrick with an oar. They get off on the wrong foot, clearly. Then she invites Pierrick in and shows him to his room. 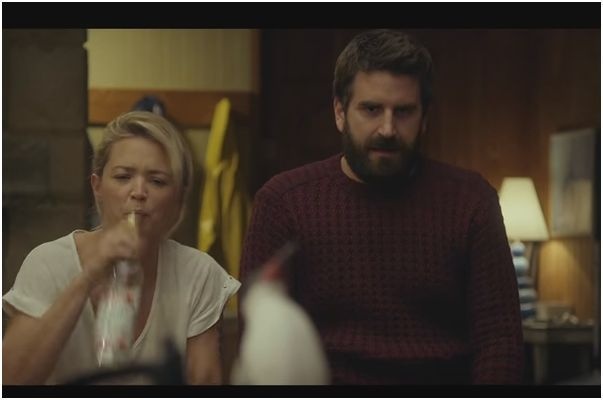 Structurally, the drama plays out as in Your Sister’s Sister. Pierrick can’t sleep. He joins Marie for a drink and then makes a pass at her. They sleep together. Marie is on condom-affixing duty.

In Shelton’s film, what happens next is a surprise – Iris turns up. She does so because she knows Jack is emotionally bruised, especially after the party. In Vernoux’s film, Tessa turns up but it doesn’t seem logical. We don’t feel the emotional gravity of the scene. It is simply, how you say, a farcical development.

Pierrick has to hide and then pretend he has come in from a run rather than having just had hot and steamy sex with Tessa’s half-sister. You don’t really feel he is disguising this. There is a minor amount of water on his shirt, representing sweat where there are no sweat glands. The scene is there for cheap comedy.

So now we have the three of them in the house. There is a ticking time bomb. At what point will Tessa discover that her beloved Pierrick has slept with Marie?

Because Efira is so obviously more voluptuous than Nakache, a new element is introduced – that Marie could have any guy she wants, if she wasn’t a lesbian. Tessa could feel threatened by being the shade of her demi-sibling. Of course, Marie being a lesbian means that they don’t compete at parties. You sense also in Shelton’s film that both women hated their father in different ways for his philandering. In Vernoux’s film, philandering loses its edge. It is the French way, yes?

At this point, I felt zero emotional connection with the characters. You don’t feel their psychology. They are just chess pieces to be moved around.

Nakache half-wins us over when Tessa gives Pierrick a massage, but I still wasn’t getting their relationship. Surely the point is that Tessa is afraid of touching Pierrick; he is like a raw wound. Not in this film.

The plot plays out as in Your Sister’s Sister. The condom is discovered. Marie’s motive – to get a sperm donor – becomes clear. How did she know that her sister was in love with Pierrick?

I didn’t buy this either. In Shelton’s film, you can believe that a woman would let a guy use a house. In Vernoux’s film, you would assume Marie would realise that Tessa likes Pierrick. She would have heard of him and his brother. She may even have watched Hotel Rwanda.

Vernoux directed the remake for the final image, which represents a new sort of family. Appropriated by her, it loses its cathartic kick.

In this film, I never understood why Pierrick trashed his bicycle.

Ludig is a comedian with a reputation for physical comedy. He is a hit on the internet. His appeal doesn’t quite translate. I don’t think you needed a comedian in the role; an actor like Romain Duris (L’Arnacoeur) would have been more effective.

The only crumb of comfort I experienced watching Et Ta Soeur is that Lynn Shelton was well remunerated and had an opportunity to make another film. However, I’m not entirely sure this is true. Ho hum!