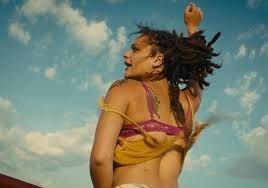 Opening scenes can be a statement of intent. In the first seconds of American Honey – title taken from a Lady Antebellum song - eighteen-year old mixed race Star (Sasha Lane) is skip-diving with two younger children. At first you think (well, I did) this is a single mom struggling to feed her kids in look-the-other-way middle-America. When we see her at home with the man of the house, Ruben (he could be another sibling, you just don’t know) you are not disabused of this notion. But Star is the older sibling, forced to play mom because her real one doesn’t want to know. Ruben clearly isn’t the providing type so Star pleads with mom to do the decent thing and take the kids. She has a job: $300 a day in Kansas. Mom is pre-disposed to scoffing. Star tells her she’s off to the bathroom. Just for a minute. She runs. Oh, she runs.

The British writer-director Andrea Arnold (Red Road, Fish Tank, Wuthering Heights), making her American debut, explores Star’s life on the road in a film of near epic length - two hours and forty-two minutes. At the end of it, we don’t even get conventional credits, just a list of names in forename-first alphabetical order, so if you want to know who served as key grip, you will have to look it up. Hell, no one reads the credits anyway. There might just as well be a bunch of names - or even dates of birth if you want to be more abstract. You might even want to represent the crew by their star signs or favourite TV shows growing up. Better yet, what about the single title card, ‘Fin’?

The story doesn’t merit the length of time telling it. But it is a road movie. Star is seduced by the charismatic Jake (Shia LaBeouf) chief salesman in a group of young people from across the country, waifs and strays, who sell magazine subscriptions. Arnold’s working title was ‘Mag Crew’ which sounds like something in the movie credits but – oh yes, there aren’t any.

LaBeouf is supremely well-cast in this film, which mostly features unknowns. The cast is so fresh, so unspoilt by Hollywood declamatory acting that when someone recognisable turns up – Will Patton in cowboy whites – you struggle to place him. (I was expecting a non-professional actor, what is this?) You think Jake is running the show – he does the recruiting, spotting Star having fished out a chicken, then seeing her again in a supermarket, and meeting her after she returns his star-bedazzled phone – having exchanged sticky-out tongues, you know, what you looking at? He offers her a job. She ain’t interested. ‘We’re at Motel 6 if you change your mind.’ ‘Not interested.’

Then: ‘you came back. I knew you would,’ Jake isn’t the leader. He rides with Krystal (Riley Keough) who doesn’t like anyone until she gets to know them. Whilst Jakes rides with Krystal in a car, Star is introduced to the crew. All of them somewhere between 18 and 23 (maybe), they are the kids college, their family and friends forgot. They are from all over; Austin, Bakersfield (that’s Jake), all over. They sell magazines. You think, that’s a euphemism for something, they must be a cult. No, they’re for real.

So we’re in the backseat with Star meeting people, sharing pipe and bottle, meeting a rat – a rat – that someone keeps in the top pocket or something. These kids don’t argue or compete. They don’t even flirt. They look forward to the next city like they haven’t been anywhere before, like this is a big adventure. There’s a song on the radio. They join in. Someone pulls out their dick - they don’t follow suit; naked penises and rats, not a good combination.

So who is Krystal? Having overslept – everyone up at 7:30 - Star knocks on the door. Naked breast, stern young woman: ‘you must be the new girl. You’re late. What are you here for?’ ‘To make money.’ Krystal approves. ‘You get 25% of what you earn. Rest is for expenses.’ Star is given money for clothes. ‘I’ll pay you back,’ she says cheerfully, wanting to bond. ‘Damn straight. This ain’t charity.’

8:00am team meeting in the parking lot. ‘You don’t sell to people at the hotel. You don’t talk about what you do.’ Sellers are dropped off in pairs, deployed like infantryman on patrol. Girls together. Boys together. Each has a story told after they knock on the door. Jake pairs with Star to show her the ropes. Everything happens in that split second when the homeowner opens the door. You have to be what they want you to be. The implication: you are the child they never had, the role model, the reflection, a child driven towards self-improvement. It’s an act – but it doesn’t have to be.

When Star sees Jake talking his way into a fancy house, having got a well-to-do Christian woman’s attention, she disapproves. Jake’s spiel is that he is applying for a programme to go to Miami. He’s convincing – the amount of acting LaBeouf has done, he’d better be. But Star denies she’s Jake’s sister. The sale goes south. There’s too much of the devil in them. ‘There’s too much devil in your daughter,’ snipes Star. The young girl outside cavorts with her friends. Mother lays down the law. ‘It’s my birthday, I can do what I want,’ the daughter trills. Jake pockets a ring.

‘I like what you did back there,’ he tells Star. ‘I got you a present.’ Now Jake had already given Star a present – a lighter with her name on it. Jakes gives her the ring. The gift is how Jake keeps women hooked. It is non-specific, a surprise, you want to know what it is, come on. You can see what keeps Star interested. She disapproves of the deception. Yet this is the life. She will discover that Krystal disapproves of the effect that she has on her best seller. She will learn about loser’s night, an excuse to let off steam, but with violence. She will see an insect – a bee maybe – and set it free. She will even see herself in some of the families that she sells to. She will put herself in danger. She will be offered money for sex. There will be sex and it will push the boundaries of a restricted rating. There will be more singing and more singing. A gun will be fired. The police will not be called.

American Honey is about a tribe juiced up to experience the American Dream as a party. There are surprises. Most of the time they stay in motels, but at one point, they live in a house. They visit oil workers and dance. ‘What are you – prostitutes?’ ‘We sell magazines.’ Star lives in constant judgement, but she knows what she wants, especially when Jake shows her what’s in his bag.

Arnold excels at documentary style. She eschews the dramatic confrontation, the point at which a rite of passage is noted. The young don’t live their lives like that. They go with the flow, live in the moment. Yesterday is forgotten. Tomorrow’s not on the cards. No one has hopes. They live for the next city. On a deeper level it is about the possibility of making your own sub-culture, your own rules. You will need a leader. You will need organisation, planning, advance knowledge. But you trust your leaders because they let you show what you can do.

One kid returns with no sales and gets beaten. Not smash-your-face-up pulverised, but enough to make him feel embarrassed, to feel the sting the next day. Arnold takes the title literally. The sellers make the honey. They need to keep the bees alive. Gradually, you tire of the close-ups of insects (a metaphor for the lost children) and the singing interludes, an anti ‘didn’t graduate from high school' musical.

The performances are impressive. American Honey is a film that makes you feel ambivalent for the young. They have such energy and vitality and yet they skip big decisions. They do birthdays but not national holidays. They remind one of ‘better together’, fear of the unknown. American Honey pitches up inside your head and stays there.