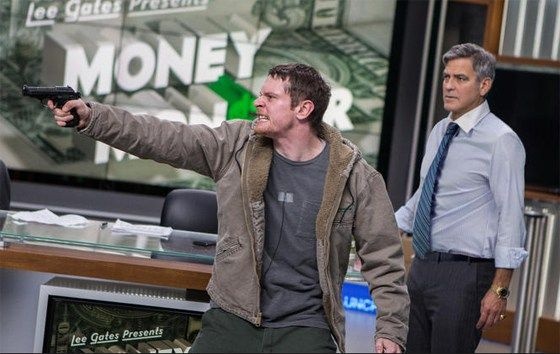 The question of whether a woman can direct a taut Hollywood thriller as well as a man in answered in Money Monster, Jodie Foster’s fourth film as director. Yes, yes, yes. Foster has an extraordinary career in front of and behind the camera, giving a performance beyond her years as the teenage prostitute Iris in Taxi Driver and taking home two Best Actress Oscars for The Accused and The Silence of the Lambs in swift succession. She has commanded the screen in Sommersby, telling Richard Gere in no uncertain terms, ‘you are not my husband’. (Look that one up.) Other noteworthy films include Alice Doesn’t Live Here Anymore, Bugsy Malone, Freaky Friday, Nell, Contact, Panic Room, The Brave One, Flight Plan and Inside Man. Foster plays tough and determined rather than coquettish and alluring. She was the Kristen Stewart of her day; coincidentally Stewart was her co-star in Panic Room. A child actress who made the transition to adult screen star, Foster never played second fiddle, or went the romantic comedy route – let’s forget about Nim’s Island in which she co-starred opposite Gerard Butler, and Anna and the King with Chow Yun Fat. She refused to appear in the official sequel to Silence of the Lambs because the film didn’t respect her character, FBI Agent Clarice Starling. Discounting her two films for Martin Scorsese in her youth, she never worked with the same director twice. As a director, she never worked with the same actors twice, though made some shrewd casting decisions for her little-seen Mel Gibson mental-breakdown film, The Beaver, which featured Jennifer Lawrence and Anton Yelchin in small roles.

Although a credit describes it as ‘a Jodie Foster film’ – I don’t think this descriptor appears in Little Man Tate, Home for the Holidays or The Beaver, it doesn’t feel like the work of an auteur – compare it for example to Kevin Costner’s directorial debut, Dances with Wolves, for a film that feels like a passion project with something to say. Foster’s films are not focussed on social justice. That is, they don’t celebrate a particular type of heroism. They are more nuanced. In this sense, they are anti-Hollywood, a riposte to the ‘event movie’ that inflates its subject and purports to say something important. This is not to say that Foster’s films aren’t interesting or don’t have substance – she is just not blasting you in Dolby Stereo with a vastly manipulative soundtrack.

Foster’s films as director are consistently inconsistent. The nearest she might have to a theme is ‘not fitting in’ or ‘being yourself in a non-conformist way’. Even these themes are too prescriptive. In one of her first films as an adult actress, The Hotel New Hampshire, it was Nastassja Kinski rather than Foster who wore the gorilla suit. She has worked a number of British directors – Alan Parker, Tony Richardson, Michael Apted and Jon Amiel (but not Ridley Scott). She might respond to directors who don’t ask her to over-play or pander to the audience. She might also admire British actors who perform without ego, hence the casting of Jack O’Connell and Dominic West in Money Monster.

Foster’s work in Money Monster is in the best sense anonymous – professional, focussed, without ostentation. As a director it is the nearest thing she has made to a popcorn movie, in which the host of a television show, Lee Gates (George Clooney) is held at gunpoint by a truck driver, Kyle Budwell (O’Connell) who lost $60,000 to one of his ‘sure thing’ tips. Kyle wants answers and is prepared to kill to get them, but as the film progresses chinks appear in his armour.

In another decade, Foster might have played the role of TV director, Patty Fenn. But if you can get Julia Roberts, no longer the box-office star she once was but still with a sizable fan base, then she can sit this one out as actress. (Foster had supporting roles in Little Man Tate and The Beaver.) Money Monster is Clooney and Roberts’ fourth film together and they have an easy chemistry; neither has to prove anything to the other. Reuniting them on screen, Foster is saying that the male-female relationship isn’t the thing. However, at a certain point in the hostage situation, Patty departs from the script.

Scratch below the surface of this George Clooney vehicle and you notice that this really is O’Connell’s film. Like Mel Gibson’s character in The Beaver, Kyle is having an extreme meltdown. Clooney is simply the marquee name to draw an audience. Although at one point Lee describes the faults in his life – he may have money, but not happiness – this isn’t a character study of a man who believes in himself as a financial tipster. There is a core failure of the film, either in Foster’s direction or in a script credited to Jamie Lindon, Alan Di Fiore and Jim Kouf, that Lee doesn’t out himself as a fraud. He never admits that he is an entertainer rather than a responsible analyst. He thrives on the adrenaline blast of his show. He interrupts his talks to camera with movie clip reaction shots. He is the comedian info-tainer of the YouTube generation. In this movie, ladies and gentlemen, Clooney puts on a top hat and dances, looking fairly ridiculous.

Roberts’ Patty tries to keep him straight, but even she has had enough of this sad travesty of a show. She has accepted a job across the street. Her character arc is: can she really leave him? Significantly, her character is only defined by her professionalism.

Just as Foster showcased a young Jennifer Lawrence in The Beaver, here she gives British actor O’Connell his first contemporary American role and also introduces those of us without an Amazon subscription to Caitriona Balfe, as Diane Lester, the Chief Communications Officer of an investment company whose stock tumbled, taking Kyle’s hopes of a better tomorrow with them.  Balfe is a model turned actress best known for Amazon’s TV series Outlander. She makes an impression here, as the PR who decides to take the investigation of her elusive boss, Walt Camby (West) into her own hands. She refuses to be shut out by the company and when she loses her access to the computer system, she resourcefully gets colleagues to help her. I have no doubt that Balfe will get a few more offers as a result of her steely performance.

In other ways, Money Monster is quite the anti-thriller, giving the audience a succession of controlled explosions even before the Semtex-filled vest Lee is made to wear is due to go off. How much is Lee Gates worth to his audience or Kyle to his pregnant girlfriend? The film posits financial disasters as a particularly male phenomenon, driven by male bravado or arrogance. The scene between Kyle and his girlfriend, Molly (Emily Meade) is a movie highlight. She does the very opposite of what is expected of her, a trait that is consistent with the other women in the movie.

The finale of the film beggars belief. But Money Monster is as much about how real-time dramas are consumed through television – sometimes the audience are indifferent. The final shot of the film is telling, a switch from a television screen to guys in a bar playing table soccer. It is not so much that Wall Street is filled with casino bankers. Rather it is that traders are programmed to think of it as a game. But the poverty that bad trading causes is not virtual.