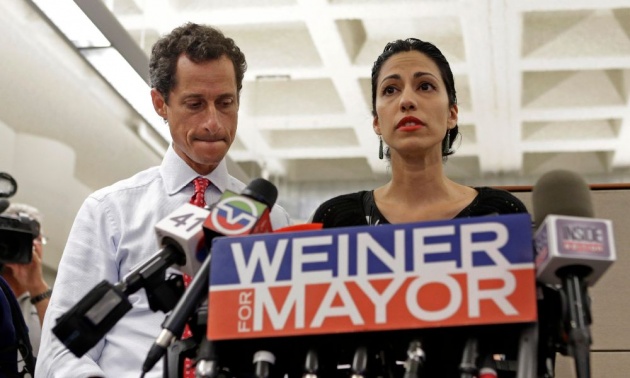 I knew little about Democratic Congressman Anthony Weiner beyond being the punchline of a joke on The Tonight Show. Elyse Steinberg and Josh Kriegman’s energizing, entertaining and uplifting documentary restores credibility to the politician who (spoiler alert) failed in his 2013 attempt to be elected mayor of New York City but comes across as a man of conviction let down by texted conversations with some anonymous admirers who somehow got his number. Oh, and by some ropey texted pictures of his private area.

It would be easy to make jokes about a man who clearly doesn’t understand boundary issues of virtual conversation. If you learn one thing from this movie, it’s that you shouldn’t try to please everyone all the time or be flattered by attention enough to let your guard down. Steinberg and Kriegman don’t give Weiner the third degree on why he did what he did. But they pay tribute to his fighting spirit. His is a true Rocky story; he fights his corner valiantly, loses spectacularly but still (oddly) wins and gets back in the game.

What makes a man flirt online with a woman? A perceived feeling of invulnerability, perhaps. A desire to brag, to recharge one’s sexual self-respect. No good could come of it. The tragedy of Anthony Weiner, at least in his life so far (it isn’t over, folks) is that he didn’t trust his voting public with full disclosure. He let the ghosts back in.

Nevertheless, if you want to understand what makes him so electable, so suitable for public office, watch his performances in political debates in 2010. He is on fire. He isn’t just shouting, he is demolishing the opposition with passionate argument – in this case the approval of healthcare rights for 9/11 emergency workers. He is fighting for the little person, the forgotten, affected by the biggest tragedy that the city had seen in a century. He wins you over.

Then the sexting scandal. He is forced to resign from Congress. When the President says you’ve got to go – etc., etc. A year later, he is back in his city, believing he can win the mayoral election. He believes he can put the past behind him and has the support of his wife, Ruma, an advisor to Hillary Clinton, who stands with him, front and centre.

There is the small matter of his fall from grace, a certain pair of grey underpants with a decided bulge. This may have been the inspiration for 50 Shades of Grey, for all I know. Weiner tackles the past head on – accepting interviews with hostile reporters. A New York Post reporter asks him: ‘which New York Post headline did you like the most?’ Hey, if you work for a cheap shot tabloid, give it your cheapest shot. (Fairness to the reporter: she understands her public.) His tack goes well; people are listening to him. He is debating the issues and not his personal life. He is ahead in the polls. But then whammy number two: more revelations, even more explicit than the first. An accuser, disingenuous self-confessed stalker, twenty-three year old Sydney from Las Vegas, who tells an interviewer, ‘never meet your heroes’.

To be fair to Weiner, he avoids a confrontation with the curvaceous Sydney and never goes after her to discredit her character and motives. What possible motives could a twenty three year old from Vegas could have texting a prominent politician in New York? I don’t think she was looking for an internship. He has to take the inevitable disapproval of his staff and wife, the latter more shocked. Nevertheless, he doesn’t quit: ‘New Yorkers don’t quit’. You admire the trousers on the guy.

Carlos Danger might be his text name, but Weiner lives up to it. He does not dodge the punches. He attends a meeting at City Island and forcefully, passionately and convincingly makes his case for his right to stand. ‘You don’t have to vote for me but give other people the opportunity.’ He is an object lesson in ‘never give up, never surrender’. He goes on a talk show in New York where he is interviewed remotely. He is rather pleased by his fighting performance. Ruma is less than convinced.

Then there are the questions: Hillary Clinton wants Ruma to either quit her husband or leave her Democratic Nominee campaign. The campaign gets to her, coming to a head on voting day.

By the end, Weiner didn’t just lose; he came last with 4.93% of the vote (at least according to a poll at 21:00 on the day). Bill de Blasio is anointed Mayor by former President Bill Clinton; a man whose campaign inspired none of the fire of Weiner’s.

You get the media you deserve. The documentary is pretty damning about news services more focussed on Weiner’s past misdemeanours than his ability to serve New Yorkers. By the end of the film, he is making a campaign video on his own – I was blown away by his skill as a communicator – and giving the finger to the press (less skilful communication).

If you want to be successful pick your fights – Weiner’s verbal jousting with a customer in a bakery sets back his campaign. Weiner invokes his own judge (i.e. God) rather than respects his interlocutor’s right to his own opinion. Not a great move in front of the camera.

You feel for Weiner’s campaign volunteers, his staff and his wife; we don’t hear from his parents or siblings. You also feel for the documentary makers. ‘Did anyone ever tell you that you have trouble talking about your feelings?’ co-director Josh Kriegman asks Weiner? ‘Have you ever heard of the talking fly-on-the-wall?’ responds Weiner.

In spite of how the election turned out, I felt a great deal of respect for Anthony Weiner. If the documentary has its desired effect, American voters will do. Don’t dim that fire, Anthony.