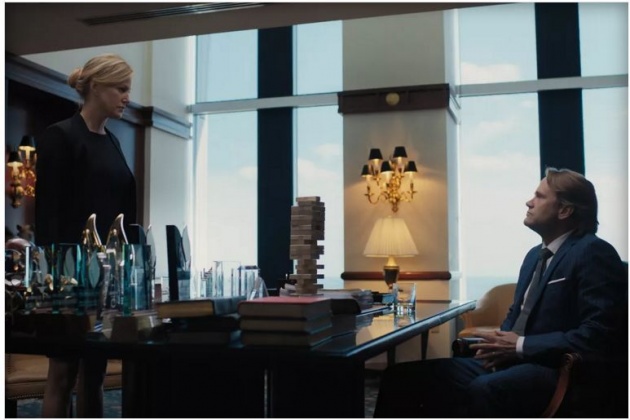 Equity, a drama about the launch of an IPO (initial public offering) of a tech company, could be the most radical film of the ’52 films directed by women’ that I have reviewed in this series. And by the way, I know it is number 58, but I don’t do your taxes. Written by Amy Fox and directed by Meera Menon, it is a film that presents three confident and ambitious women working in corporate finance. This subject is not immediately interesting to a mass audience in part because some explanation is needed. So here goes.

The purpose of an IPO is to create capital for an existing company by having it valued and then putting shares on the market. A successful launch means that the company will trade on its share price launch or higher. This means the company will generate the capital it hopes for in order to expand its business. However, if the share price drops below its opening price and doesn’t rally (increase), the company will have less money. Increasing the number of shares in the market lowers the price, so that won’t help. In short, a bad launch could tarnish the reputation of a business.

The tech company at the centre of Equity is Cachet, a social media company that promises its users an information haven that cannot be hacked. ‘Don’t think of use as a social media company with great security, rather a security company with a social network’. Note to filmmakers: the dark web has a social network too. Investment banker Naomi Bishop (Anna Gunn, best known from the TV series Breaking Bad) wants to mistress-mind the IPO for the company, which requires charm, tact, confidence and the promise of millions of dollars. However, Naomi got burned on a previous IPO launch – the company switched investment brokers at the eleventh hour. So she really wants to get this one right.

Normally in movies, we expect there to be something special about the launch – a twist. We don’t go to the movies to see people just doing their jobs. We expect them to be doing their jobs in extraordinary circumstances, where, for example a conflict of interest arises or the company – the subject of the IPO launch – is a fraud. But Fox and Menon go easy on the exceptional challenge. This isn’t a Deepwater Horizon of the financial world. The twist is that Naomi is in a relationship with a colleague on the sales side, Michael Conner (James Purefoy) who is unusually – and unethically – interested in the IPO. Naomi also has a newly pregnant Vice President, Erin Manning (Sarah Megan Thomas, one of the film’s producers) who is being passed over for promotion, being told (once too often) that it is ‘not her time’.

In a parallel plot, a financial regulator Samantha (Alysia Reiner, another of the film’s producers) is looking into a historic case of unethical dealing involving Naomi’s firm. Samantha is an acolyte of Naomi’s – she attends the same City Women ‘alumni’ event at which Naomi speaks and declares her unapologetic love of money.

In the benchmark financial drama Wall Street (director: Oliver Stone, 1987), we were told that ‘greed is good’, that there was pleasure to be had in acquisition. Naomi doesn’t speak about money as a source of pleasure or even a right in her line of work. She wants to divorce the idea of earning big money from being a prostitute. When she says she likes money, it is more an assertion for equality and a statement of intent. She effectively says: ‘I only succeed when I make a lot of it.’

Give a character an ambition and it becomes both their hubris and hamartia. Their arrogance sets them up for a fall. In a Hollywood film, we would want something to redeem the character – to save them from themselves. But this is not Hollywood.

Is Naomi a villain? Certainly not! She rubs her colleagues the wrong way by not inspiring them and talks frankly – you might say rudely - to her client. She certainly does not like a cookie with fewer chocolate chips than everyone else’s – the standout speech in the film. But she is competent and has the client’s best interest at heart. She takes the show on the road, parading Cachet to institutional investors in major markets (including London) and ensures that Cachet’s presentation is slick and easy to understand. She doesn’t crush people outright in the pursuit of her own ambition.

We sense also that she has sacrificed family for her career. On a scene at a golf course – one of the expected tropes of a film about financial management (others include the squash court) – she asks her mentor (James Naughton) whether he would have still pushed for her if she had gotten pregnant. ‘Yes, of course,’ he insists. She knows he is giving her the answer that she wants to hear – that her life choices today have been worth it. But by eschewing motherhood, she is not a bad person.

By contrast, Erin, who takes a business call during an ultra-sound, is frequently seen rubbing her six week pregnant belly hoping (we surmise) that it doesn’t show. She wants to be perceived as being in the game. At a critical point, she takes a call from Naomi exposing information to a third party that leads to the unravelling of the IPO.

So where is the drama? It comes from Cachet terminating the employment of some of its hackers. One of them starts a rumour that Cachet can be hacked. There is also a breakdown in Naomi’s own workplace relationship that involves a hedge fund called Titanite.

The second standout scene involves Samantha, the malpractice investigator, at work, appearing to recognise by chance a guy she has been investigating, getting him to admit that he was party to information about a company prior to an IPO launch that he didn’t report to potential investors. Menon allows us to enjoy the mock seduction, the ways in which male arrogance – a willingness to brag – leads to one man’s downfall.

Equity shows that women can function on Wall Street, though not necessarily with their morals or integrity intact. The film was sponsored by Bloomberg. It actually sends out the message that investment banking will not lead to personal fulfilment for women, that actually, women are better off not being on the trading floor because the career will not make them happy, even when they take home a few extra zeros in their pay cheque.

That doesn’t sound particularly radical. But Equity gives a leading role to a 48 year old actress (Gunn) who is not a conventional star and who looks (unconventionally) past her prime. It does not deal in redemption or moral goodness. There is no sex – only bad language. There is no artificially inflated plot. The pleasure is in watching a loss of control, in a moment of identification, of a character saying what we would like to say (complaining about a deficient cookie). On the conventional side, the arrogant CEO of Cachet (Samuel Roukin) and the film’s outright villain are played by Brits. Also, Tasmanian Sea Trout is presented as a delicacy (which is probably true). Would a bit more drama and humour not gone amiss? That is the open question to Broad Street Pictures, the producers of the film.