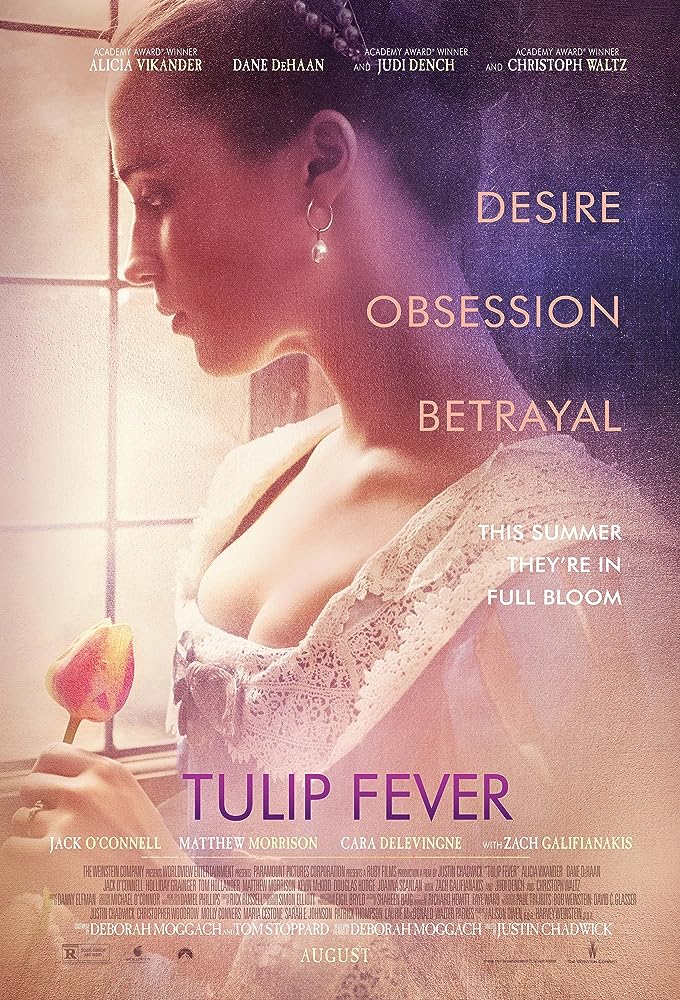 I have been writing movie reviews about the bitLanders Film Series since I came back more than a month ago. Most often, I have this specific blogging style of looking into the casting, plot and the overall technicality of every film. However, after seeing this movie Tulip Fever for the first time, I became so intrigued with it I made few readings about its facts.

So, for now, let me set aside my regular movie review routine and share to you things you need to know about Tulip Fever. I might insert a few of my thoughts about the movie itself at some points. Please, sit back and enjoy reading!

1. It is based from the novel of the best-selling author, Deborah Moggach, with the same title.

This might not sound news to everyone but let it be known that this historical fiction was based from book. Yes, Tulip Fever was an adaptation of the novel written by the British, best-selling author of The Best Exotic Marigold Hotel, Deborah Moggach.

Moggach got the inspiration to create the novel after she acquired an antique, Dutch painting in an auction. She said she’s always found Dutch paintings captivating, that at one point in her life, she was drawn into drafting a novel about it. After careful researches, she stumbled upon the tulip mania and decided to write the plot around it.

2. Its setting is based on a nonfictional occurrence in European history, the Tulip Mania.

As mentioned above, Moggach based the book’s plot on the tulip mania. It was a phenomenon in the Dutch Golden Age, particularly in the Netherlands, where newly introduced tulip became a status symbol. As a result, market prices for different tulip bulbs significantly increased, with all marketers highly interested in its trade. However, by early 1637, its economic activity dramatically collapsed leaving the Dutch community in socio-economic crisis.

Moggach mentioned in her own website that the very reason she got interested in this period of Dutch Golden Age. She thought the phenomenon was a “wonderful symbol of human greed and passion”.

3. It received an R-rating for its explicit sexual content and nudity.

Director Justin Chadwick seemed to have lived to Moggach’s depiction of the novel. Because the book symbolized human greed and passion, the movie were full of its visual representations. There were lots of making out and sexual scenes, coupled with nudity, which resulted to an R-rating from the movie board.

I personally expected the film to contain much of it. If you have read the book, those parts are far too illustrative to think otherwise. The main characters’ secret affair, as well as the chambermaid’s, was written out very well.

So was the movie, with all the sexual scenes which were visually appealing and beautifully made. They were artful and suited to the entire movie. Judging it from a clear perspective, these scenes did the book justice.

4. Its production took years to be finalized.

It was reported that the plans to adapt Maggoch's novel into a cinematic masterpiece could be dated back in 2004. In fact, she wrote a memoir-like article in Hollywood Reporter's Guest Column. She mentioned how it all started, and that it was supposed to be a $48-million budgeted film.

However, there came problems with tax issues in UK where the movie was set to shoot. And so, the original plan collapsed.

Behind the Scenes of Tulip Fever - Photo Credit: The Hollywood Reporter

It was not until 2014 that reports started to come up in regards to the film's production again. New names came out and suddenly film was set to release finally by 2017.

5. Jude Law and Keira Knightley were said to originally star as the leads.

Maggoch, in the same article, also revealed different names of big Hollywood actors as the original cast to star in Tulip Fever. English actor Jude Law was chosen as Jan Van Loos, the young aspiring painter. Alongside him was English actress Keira Knightley as Sophia Sandvoort, young wife of a rich but old merchant Cornelis Sandvoort supposedly to be played by Jim Broadbent.

Also, at that time, the movie was supposed to be produced by Steven Spielberg through DreamWorks. The director originally chosen to work on the film was John Madden.

However, when reports came up after about ten years, Justin Chadwick was the newly chosen director, with Alicia Vikander playing the role of Sophia. The following year, other actors were officially named as final cast, including Dane DeHaan as Jan Van Loos, Christopher Waltz as Cornelis Sandvoort, Holliday Grainger as Maria, and award-winning actress Judi Dench as the abbess of St. Ursula.

In 2017, Box">www.boxofficemojo.com/movies/?id=tulipfever.htm">Box Office Mojo tallied Tulip Fever's gross earnings which amounted to $8.38 million worldwide, with domestic earnings at $2.45 million. It was about $18 million short against its reported">bombreport.com/yearly-breakdowns/2017-2/tulip-fever/">reported production budget of $25 million.

Reports of the movie's box office failure were centered on blaming the long delay in the film release, as well as some production company financial woes. Tulip Fever was released in relatively few theaters.

Querlo Chat - "What kind of movies do you like?"

I felt a bit sad reading the tragic production history of the movie. I personally thought it was a good movie, nothing spectacular or whatsoever. But the box office flop seemed to be miserable outcome.

Two review aggregators, Rotten Tomatoes and Metacritic, gave Tulip Fever whopping ratings of 9% and 38%, respectively. The former was based from the collected reviews of fifty five movie critics, while the latter was based from twenty one critics.

The general accord of the movie critics seemed to be directed towards the draggy storyline. According to Rotten Tomatoes, its movie critics general consensus was that:

IMDb had a higher rating for the movie though. According to its page, the ratings was 6.2/10 based from users and external critics.

8. The movie might not be about women empowerment, but Alicia Vikander is definitely a real-life example of a strong woman.

Anyone who had seen Tulip Fever would agree that its story was not and would never be about women empowerment. The two main female characters in the movie, Sophia and her chambermaid named Maria, were both caught in such tragic lives.

Sophia was orphaned and poverty stricken. In order to escape her miserable life, she was forced to marry Cornelis out of convenience. Wanting to repay her husband, she struggled hard to bear a child, enduring nights of sexual encounters without love.

Then, she met a young man she was seduced to commit lustful and immoral affair. She chose to walk away with him to further consummate their love.

But in the end, when all else failed for the both of them, she needed to live in hiding again, faking another death against her lover. That was all because she felt full guilt of her wrongdoings.

With Maria, she lived her life as a servant. And when she got pregnant out of wedlock, she was forced to enter a terrible agreement. How miserable do you think it was for a woman back then to bear a child out of wedlock?

Both these women were evident representation of human's frailty and failure. Who would think any of the two could stand up as an empowered woman?

Still, it was not a dead end for Tulip Fever. Alicia Vikander, the actress behind Sophia's character, is a complete opposite in real life. She is a successful artist and business woman. She even recently starred as the newest Lara Croft for the reboot of Angelina Jolie's Tomb Raider. Same goes for English actress, Holliday Grainger.

Now, that's a wrap! Thank you for reading my blog. For more of my works, kindly click on the links below.