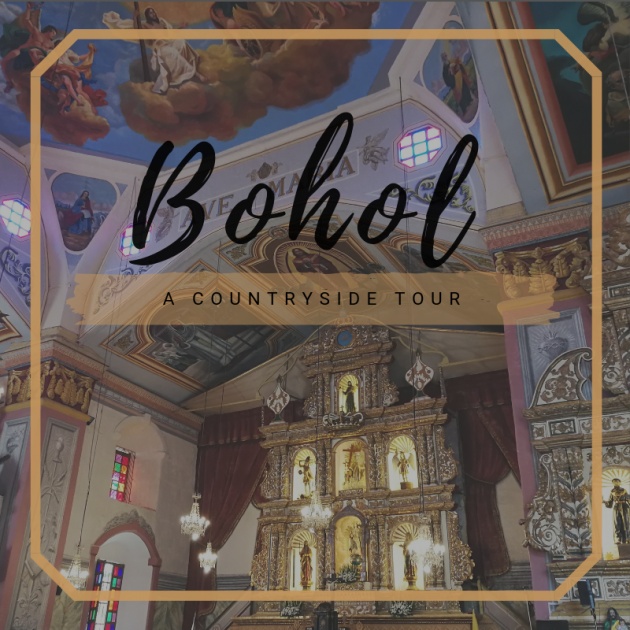 On my previous blog, I shared the first four tourist spots we visited. And this blog is the continuation of our Bohol Countryside Tour. I decided to divide it into to avoid having a very long blog. If you haven't read my first Bohol blog, click the link below.

This footbridge is made of woven bamboo slats supported with steel cables. It spans around 40 meters long and 20 meters high and offers you a full view of Sipatan River. Originally, the bridge was constructed using bamboo and ropes were used for support and railings. However, a lot of tourists kept on crossing the bridge to have a good view of the emerald waters of Sipatan River, which is actually connected with Loboc River, the locals decided to replace it with steel cables. Later on, they also decided to add one more bridge to avoid foot traffic caused by ongoing and outgoing tourists and locals.

Eating in a restaurant in big cities is mainstream but eating on a floating restaurant is definitely you cannot do all the time, right?

The Loay river cruise is situated in the town of Loay and operated by the Rio Verde Floating Restaurant. It has two (2) options in the menu, an ordinary buffet and the high-end buffet. In our case, we get to experience the services of the high-end buffet which uses a bigger boat. It is named as Pawikan or Sea Turtle since the roof is formed into a large Pawikan.

The starting point of the cruise is at the Loboc River's mouth. As soon as the bills are settled, you can board on your designated floating restaurant. You can start eating even when the boat-restaurant is still tied on a dock. Filipino dishes are served which every foreign tourist should taste. You can enjoy your meal while the boat is cruising gently onto the calm and emerald river. Also, a local singer is ready to serenade you with the pop and traditional Visayan songs, Filipino songs and a traditional Korean Song.

After a few minutes of cruising, the Pawikan will steer on the left side of the river and dock on the small village of Ati Tribe. A group of tribesmen from the Ati Tribe welcomes you warmly with their cheerful smiles. Tourists are given a few minutes to interact and participate with the natives and do the picture taking. In exchange for the warm and great experience with the Ati Tribe from Panay Island, tourists will then tip generously as this support the needs of the tribe.

1. Eat while the boat-restaurant is still on a dock so they crew can fill it up right away.
2. Not a fan of soda? Well, you better bring your bottle of water since they only have 8 oz. of soda. You will be forced to buy bottled water when you get there and the smallest bottle is 30Php of which you can buy for only 15Php.
3. Reservations are available. I highly recommend this one if you travel in a large group.

The Bohol Python and Wildlife Park once housed the largest in captive Python in the world, Prony. She was 23-feet long and weighed about 300 kilos. She was named after her captor when she was still 5-meter long. Unfortunately, the real Prony died of old age in the year 2013. 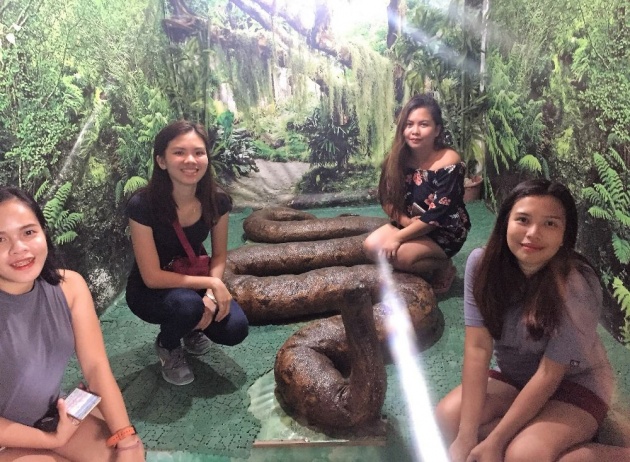 Prony's skeleton is displayed at the mini-zoo while her skin is preserved and displayed in her room before. However, one of the locals, our hired driver, told us that there is a new Prony. He said that the new Prony is the sibling of the before-Prony. The new Prony might not be as huge and large as the old Prony but still, its size and weight will surely amaze you. The park feeds the new Prony once every two weeks.

The two caretakers encouraged us to go inside the cage to have a closer look at Prony whose mouth is not taped. You can see the breathing movement of Prony's body. It was a fun experience to be in the same room with a huge python.

Aside for Prony, the park also houses other pythons like the yellow-skin python and other animals like a Baboon, domestic animals, different kinds of birds and other reptiles like a monitor lizard. If only the management could do something on the animals' cages and the cleanliness of the area.

Visiting this park would be incomplete if you will not be able to take a solo picture with one of the Pythons. Now my three classmates were so afraid but Hazel was able to grab a huge amount of courage to carry and take a picture with a python twice. She took first then, I was next and she was surprised that I was able to stay calm and smile in front of the camera while the python's head was already near my face. So, she decided to carry the python again.

Lastly, you can purchase souvenirs in the park as well as exotic food and drink. They sell Chichaworms which is very delicious and a Snake wine.

Bohol has a number of old churches which were built way back to the early years of Spanish colonization. One of these old churches is the Church of Our Lady of the Immaculate Conception in Baclayon. It is considered to be one of the oldest churches in the Philippines as it was founded by the Jesuit priest Juan de Torres and Gabriel Sanchez in the year 1596. It was declared as a National Historical Landmark by the National Historical Commission of the Philippines on 1994 and on 2010, as a National Cultural Treasure by the National Museum of the Philippines.

The exterior is in a cross-shaped form (cruciform) built out of coral stones and the white of million eggs was used to cement them together. The interior, especially the altar, is heavenly beautiful. It has three retablos or altar which are inspired in a neoclassical style. The ceiling is painted depicting the Last Supper and a Spanish inscription dedicated to the Virgin Mary. When a 7.2 magnitude earthquake struck Bohol in 2013, the church had a major damage. Reconstruction was headed by the National Museum of the Philippines which started in 2013 and was completed in 2017.

I first visited Baclayon church in 2014 where the reconstruction is on-going. And on my second visit, 2018, it was already completed. Unfortunately, we weren't able to roam around and take a good picture of the church since there's a wedding happening at that moment. Next to the church is the old convent which houses a small museum. Aside from being mesmerized by the interior design of the Baclayon Church, the church has centuries-old religious relics, artifacts, and antiquities in the 16th century. Cameras are prohibited once you step on the museum so it's just you and your bright eyes and curious mind.

The Blood Compact Shrine was made in honor of one of the most important events in the Philippine history done between Miguel Lopez de Legazpi of Spain and Rajah Sikatuna of Bohol. Blood Compact or the "Sandugo" was a treaty of friendship based on respect and equality. The Spaniards colonized the Philippines for more than 300 years and the Sikatuna-Legazpi Sandugo is considered as the "First Treaty of Friendship" between two different races, religions, cultures and civilizations.

The Blood Compact Shrine is placed in an open area, just along the national highway. It portrays five (5) life-sized sculpture of men gathered around a table with Legazpi and Sikatuna supposedly making a toast. This sculpture was made by a Boholano and a National Artist, Napoleon Abueva.

It's a Wrap and then a Trap!

In just one day, we visited nine (9) tourist spots and one semi-extreme activity, the 1-hour ATV ride. The countryside tour was indeed memorable and remarkable but, we were very exhausted and badly needed some soft cushion to lay on. We were heading to the resort that the travel agency reserved for us. The driver didn't know the exact location so I was in charge of Google Maps. There were two ways showed in the maps, one is already closed because it's a private property already and the other one is a road all the way to the seashore.

And yes, we were dropped off and forced to walk for 20 minutes at the seashore just to arrive at DuBay Resort. We were already dead tired and the last thing that was on our mind was to walk carrying our luggage for how almost half an hour.

Planning to travel?
Choose and book your place to stay through Airbnb and claim ₱1,600 on your first trip by clicking this: carylkeene