Who here likes to read books or ebooks for leisure or for work? How about anyone planning to publish one? Well whichever you may be, if you like anything about books then you will find something to like about the Philippine International Literary Festival.

Last year I went to the same event at the same place but there was free flowing food and drinks and there were lots of people, most probably because it was held on a weekend. Below is a picture of one of the food they had last year. I forgot what it's called. I think it had fish or chicken inside. It wasn't too delicious for me but it was filling enough and free so why complain? :D

Wasn't able to take a pic of the other food they served then but we had free unlimited iced tea as well as waiters who served them. Oh that was a good day indeed.

Funny how this year it was held on weekdays. Perhaps more people would've been able to join if they held the event on the weekend. The 2nd day was a Friday and a legal holiday at that yet fewer people still showed up as compared to last year.

Why should people go to this yearly event you might ask? Well let me tell you what it is first.

♥     What is the Philippine International Literary Festival (PILF)?     ♥ 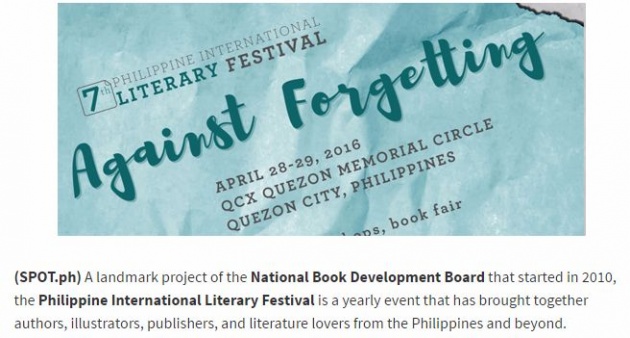 2016 was the first time I learned about this event. It apparently came about in 2010 through the National Book Development Board (NBDB). It's first event was called Manila International Literary Festival and had an entrance fee.

Also, as far as my topic research went, I found a video about the 6th PILF that was held in Davao City in 2015! Ain't that cool? Seems like it was the first time this event was held in the South of the Philippines. Check out what PILF is all about in the video below. :D 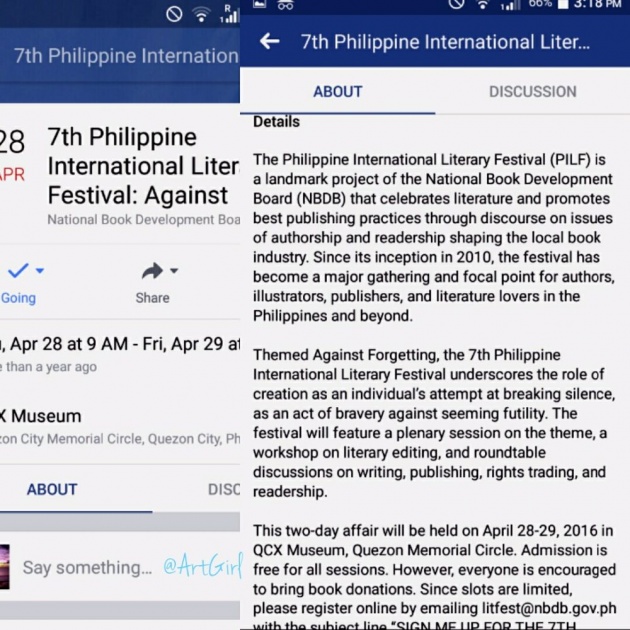 Well I am a Facebook page follower of NBDB which I also rediscovered last year. Haha~ 2016 was really a creative year for me. Ah, what "heartbreak" does to people eh? Okay okay it wasn't really much of a heartbreak as much as being inspired by a male muse. *sigh*

Ehem, back to the topic. So I was browsing through Facebook last year when I saw the event post of NBDB for PILF, got curious and checked the event topics they were gonna cover and of course decided to go. It's been years since I've been planning on finally writing/finishing a book or creating that graphic novel but it still hasn't happened yet. Might as well attend some talks to find out what I want to get into before I get into it right? That's why I follow NBDB, to get inspired and get book updates and publishing news etc.

Now maybe you're curious what this other organization is. If you haven't heard of NBDB and didn't bother checking the links above, here's a short but dated video back in 2011.

So since I was eager to learn more about publishing and the local literary world, I didn't hesitate to go to the event at all even if I was working nights at the time. After work,  I went straight to the venue but had to go home early in the afternoon after the talk I attended so I could finally sleep.

I did enjoy the food back then. Really sad they did not have free food this year when even the survey form had questions about the food quality.

I still have the audio recording of some of last year's talks in my smartphone. I also still have pics of the books I saw and bought at the book fair there in 2016 (see below). And I haven't read any of them at all!!! OMG. (O_O)" 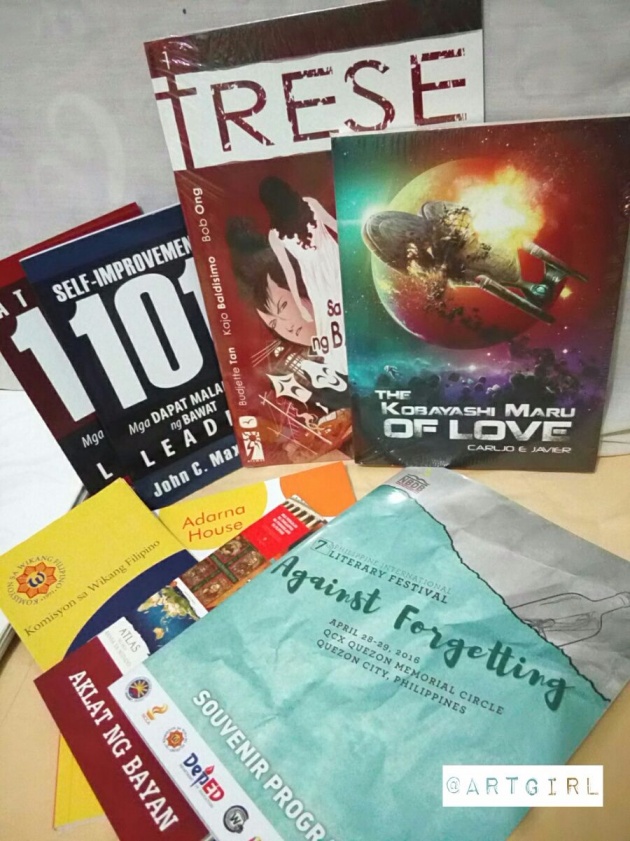 This year, I didn't buy any books or recorded any audio. I was happy to listen to the speakers and ask a question or two. And it wouldn't be an international without foreign speakers right? So if you're looking forward to this event next year then you're sure to see other foreign nationals as guest speakers too.

I only attended two talks, well actually two and a half? I was late to the first one which was about copyrights. The second one I attended was about contract management with an Asian foreign speaker. The last one, about selling rights, I consider a bonus because I didn't really plan on being in it but had free time so stayed for it.

Curiously, the last talk was kinda serendipitous even if I felt like the speaker did not stick to the topic. The last speaker of the day was a Turkish literary agency owner who also started an international literary festival in Turkey! Cool right? I now have two incidents with Turks in one year! Alright! 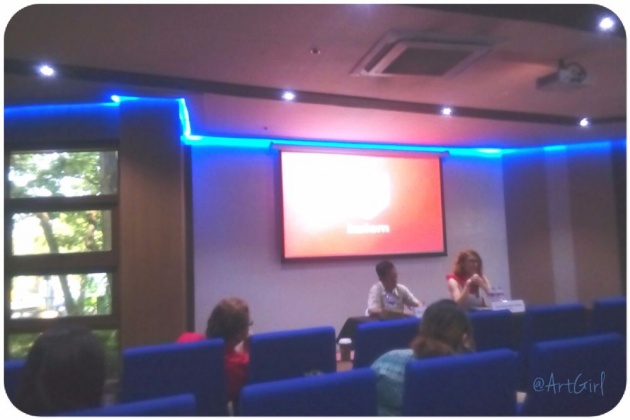 I met a Turkish couple at our mall booth earlier this year inquiring about The Westin Residences. It was really cool listening to this uncommonly heard language then. Well at least personally it was something new for my ears.

This speaker spoke English all the way through though but at least I was able to share my anecdote with her that there are Turks who know about the Philippines, specifically the traveling couple I met and talked to. 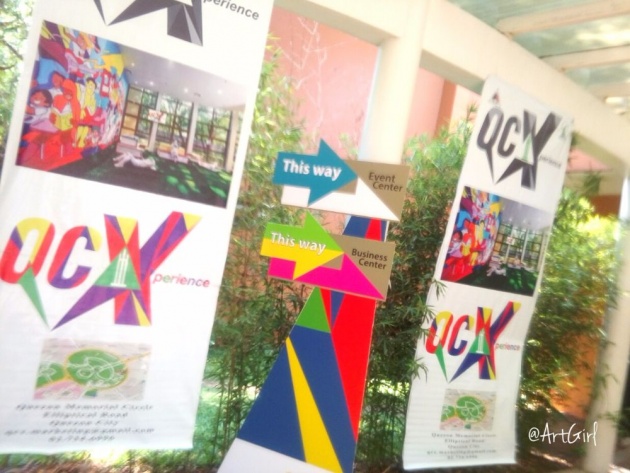 This year was the first time I finally learned of the venue name. Last year I didn't bother finding out the name of the place; probably because I lacked sleep and wanted to finish the event as quickly as possible. All I knew then was it was inside the Quezon Memorial Circle (QMC). Now I know the place is called QCX Museum. It's quite new, having been built just two years ago. The place has interconnecting areas and rooms/halls where you can go to and fro to attend the different talks you choose to go to. 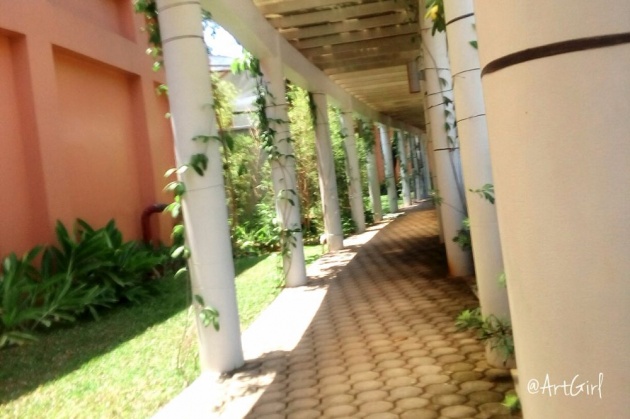 It's a bit far from the entrance of QMC if you don't have a private vehicle. It feels like it's at the other side or end of the place even though QMC is round. :D It has lots of greeneries so it's not too hot around and within the whole structure. The seminar rooms and convention areas are air conditioned too so it's not hot at all even though it's summer. 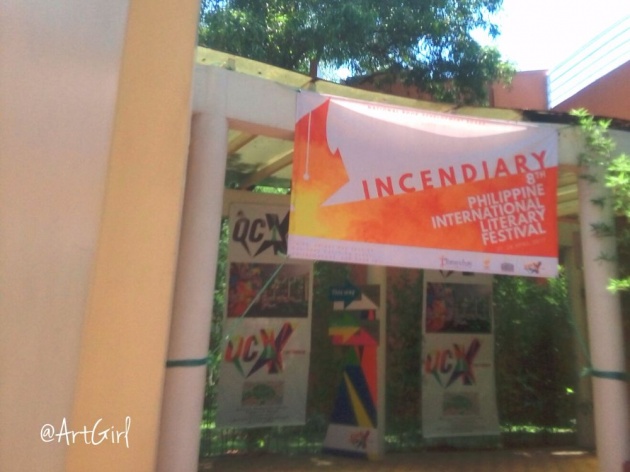 This year I noticed a big improvement in the chairs in one of the rooms. They still have cushioned folding chairs but now it has folding arm chair desks! Whoa! Should've taken a video instead of these photos here... Awww, you won't appreciate it as much with just this pic. 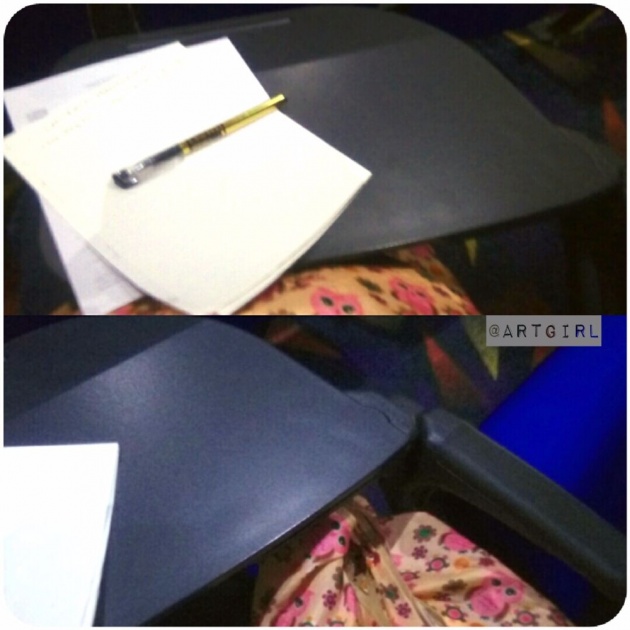 Anyway at least you can still see it via this pic and know that it is a well maintained place. :)

Aside from the informative talks in the rooms, the registration area and the mini book fair were both at the main hall. Different publishers had their books for sale on display at their respective tables.

I did look at most of them but didn't buy anything. Not much comics sold this year unlike last year. Last month it was more of books and a few comics. I think some academic books were in there somewhere as well.

One thing that struck me out of all the book exhibitors there was this poster, for its novelty: 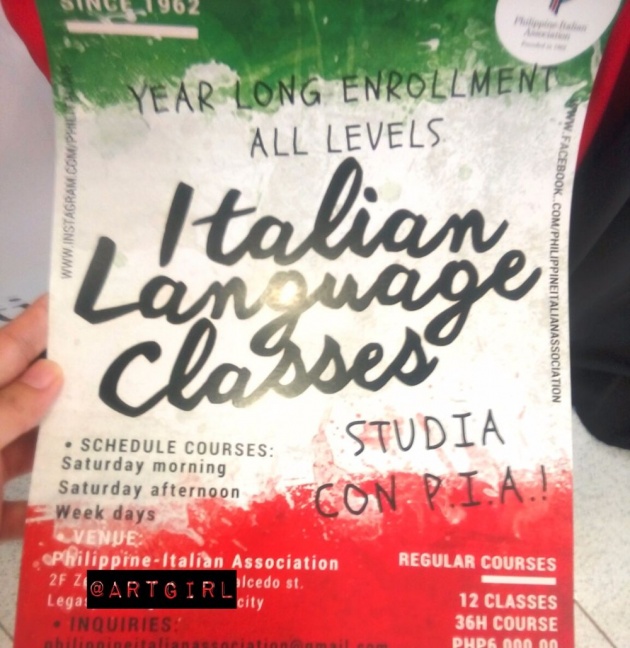 I am more used to seeing Japanese, Korean or Spanish lessons being offered and then this comes along. Whew. Too bad am not as interested with their language as learning the above mentioned ones.

I know the Italian language is kind of related to Spanish as much as French (?) but I still prefer to learn Spanish. And then maybe some Russian too. Lol.

Anyway it was still a productive and well spent day. Not sure if I will still be going next year. Who knows? I might finally be able to do those books or graphic novels I have been pending in my mind for so long. Lol. Even if making or publishing actual books become outdated, there are other ways to get published in the future. All we have to do is find new ways to keep literature alive.

How about you? Do you usually attend book fairs and buy all the books/comics you want? Do you also have any kind of international literature festival in your country?