This movie review is a submission for "The bitLanders Film Series" to Support Women Empowerment. You might think, well this is not part of the movie list given by Micky-the-Slanted-Salerno and yes, I know but I want to add it because I feel like the women in the movie portrayed strong and determined characters which every single woman on planet Earth should also acquire.

Surprisingly, the movie A Quiet Place is available for rent in YouTube Movies for only Php 180 (3.5$), that's 50% less compared to the other movies like Disney's Moana which is at Php 370 (7$)! Why could it be? I truly believe YouTube has its own reasons. But just to make it clear, I didn't watch the movie out of YouTube Movies but I was able to watch it during the Halloween Event at Arcanys, my husband's company.

Remember my blog regarding how the Cebu-based companies join the Halloween fun? Read it here: How Cebu-Based Corporate Companies Join the Halloween Fun?, Arcanys also had the decoration contest and even had a movie night! Since I was at the office that time, I joined in and watched their third movie of the night, A Quiet Place.

Only a small percentage of humanity is left after these unnamed, blind creatures had wiped out the population. The movie centers the Abbott family who was part of the few left, they were scavenging their way to survive these almost indestructible creatures who are attacking anything that makes noise, thus the survivors, the Abbott family specifically has to keep themselves quiet the entire time, thus the movie title, A Quiet Place.

Lee (John Krasinski) and Evelyn (Emily Blunt) together with their children Regan (congenitally deaf), and sons Marcus remained intact, keeping themselves quiet all the time after they lost their youngest Beau because of a noisy toy space shuttle. Regan has to keep the blame of it because she was the one who gave the toy to Beau.

Years after that incident, the family was expecting a new baby and they had planned their way out to get the baby out with less noise as possible. Evelyn prepared the oxygen, the underground room and the possible area where she could give birth and raise the child but some unexpected things occur.

While Lee and Marcus were out to fish and Regan at Beau's memorial, Evelyn stepped on a nail while alone at the house, she dropped a frame and this made a noise, attracting a nearby creature. She then went into an emergency labor but survived the creature and the labor with Marcus' firing up the fireworks to distract the monster.

Lee, on the other hand, went out looking for his children but Marcus and Regan ran out of gas-liquid before Lee could find them. While fighting over if they should go, Marcus fell into a corn silo, Regan jumped also to rescue Marcus while the creature was on the area, Regan's hearing aid sent out frequency which irritated the monster.

The monster then went into attacking Lee while the kids hid in a truck. When Marcus saw his father helpless, he screamed, the creature then went towards the kids while Regan turned off the hearing aid because of the noise pain, Lee went sacrificing himself but made an I love you sign before doing so to remind Regan how much he loves her.

Lee was attacked and killed in an instant while Regan and Marcus went home driving the truck. They found their mother and they both went down to the basement to hide but the monster came too, while nearby Regan's hearing aid was sending out high frequency to the creature, showing them a distressed reaction. Learning about it, she kept it near a microphone which made the monster expose its flesh and Evelyn shoots the monster that killed it.

The movie ended with the notion that the family now has found the monster's weakness they had been looking for.

Movie Review: I Wasn't Scared at All!

Honestly speaking, I didn't jump off my seat or screamed the entire hour I was watching this movie. I thought it was a horror film? But I don't know, I just didn't feel that scared at all. Though I admit, there was certain music that could anticipate that there's a monstrous scene coming up but it was very predictable that I had prepared myself before it could happen.

In all fairness to the producer Michael Bay, this had definitely become a movie that was hyped around the globe. Everyone thought it has a unique story and we all know about being quiet, we just can't do it! Everything around us produces a sound so perhaps everyone was anticipating a pretty halting and holding on their seats when this movie comes out of the screen.

John Krasinski being the co-writer, director and even the co-star of A Quiet Place is just insane! How can such a person do so many things at the same time? I also would like to comment that he did well! Plus, note, it's his real-life wife, Emily Blunt who was his partner as well in the movie! She was totally terrific, acting-wise and all so I am going to talk about her in the next few stanzas for this movie review.

But first, I just want to say that the movie had no proper introduction on why there were monsters or aliens if that's what they were in this part of the world. But during the start of the movie, it did showcase how the family lost their youngest because of his noisy toy. It made me cringe that they didn't ensure all things that could possibly create noise would be eliminated off from their home. However, this is a very unique one which I applaud the writers for. 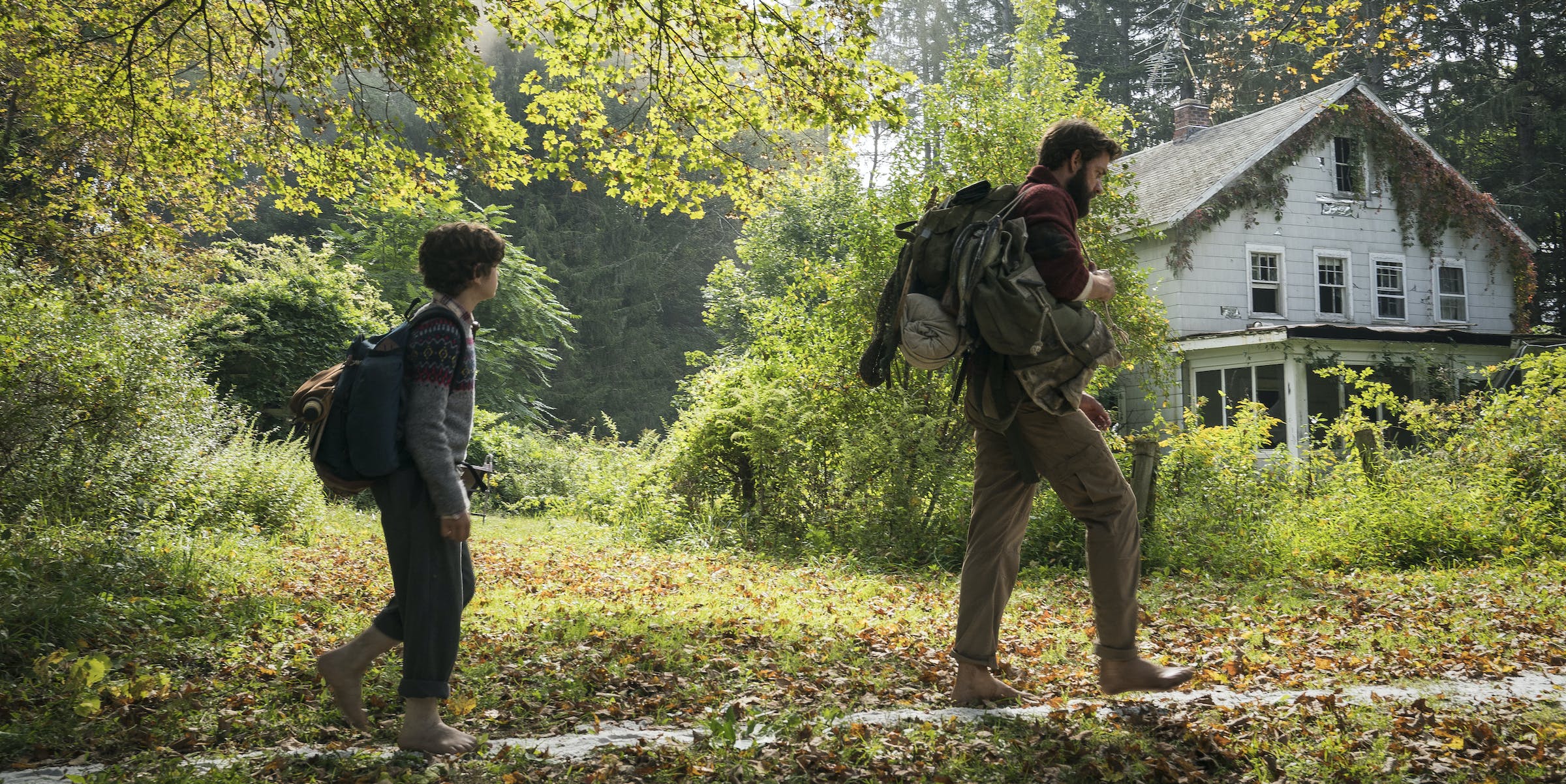 I might have missed it or what but A Quiet Place showed only the exceedingly cringing moments of labor and suspense by keeping the child's noise under control. There was even a little portion of that part where the John Krasinski was making the ear hearing aid.

I must also say that this movie had a pretty slow phasing most especially during the first part of the movies. I worry I might get bored while watching it but because the quietness strategy was giving me this "focus" reaction, I couldn't help but get my attention just right into the movie, I was looking forward to more but it didn't give me that satisfaction.

When the movie ended, I just felt like okay, that was it and had to get over it. The horror scenes didn't even register that much in my head! So perhaps it was just me or the movie really wasn't that terrorizing.

Now here comes the real reason why I am making this blog. Emily Blunt was just so good at this movie. I must say, if it wasn't for her solo scenes, this movie would be a flop! Yes, I mean that.

First, she lost a child because of the child's stubbornness. Children are like that in real life. Second, she has a deaf daughter. The entire family learned how to sign language which helped control their voices during the entire film. But as a mother, I know how hard it would be to take such events in one's family life.

Third, she got pregnant and has to suffer labor pains and keeping herself from screaming during that time. I have not gone labor yet but my friends, my mother did and they all testify it is something they don't want to go through again. The exhilarating and exhausting pain plus the transformation of the woman's body.

Imagine all of that Emily Blunt had to go through and she has to keep quiet that entire time! I don't know if there's someone else in this world could do normal labor without screaming their lungs out! Plus, she has to endure the pain of stepping on that nail! I totally hate that part!

Fourth, surviving several monster acquaintances is such a blessing! She sure is the main character of this movie or perhaps it's her daughter too! And finally, John Krasinski was the real hero!

What do you think of the movie? Did you watch it already? If not, are you going to watch it after this movie review?

Thanks a lot for reading and participating the Querlo chats!

About the author:
Jean Beltran-Figues is a photography and calligrpahy enthusiast.
A traveler who wants to promote her beloved country, the Philippines.