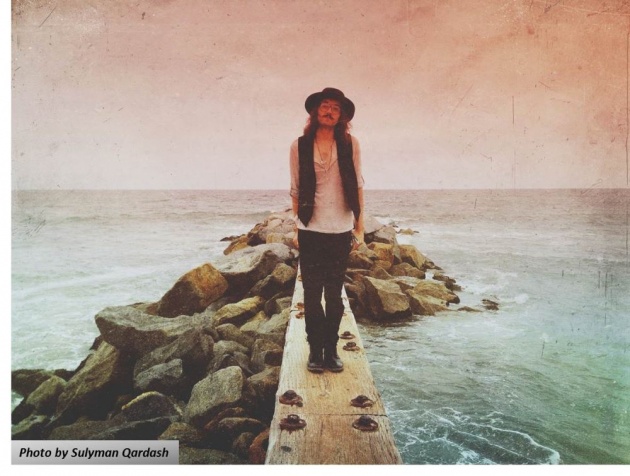 Watching the fingers of a world-class artist fly across the goatskin face of a rabab  is like crossing a sonic bridge over 2500 years old.  In the right hands, the sound of a rabab is as delicate as a birdsong and as powerfully sensual as a summer thunderstorm.  The rabab  is mentioned in countless works of Sufi poetry.  A good one is an object of elegance, crafted from the finest wood of native Afghan mulberry trees.

Most Westerners don’t know what a rabab  is yet. But if Qais Essar has his way, they will know soon.

When people first hear the sounds of a rabab  played by Afghan master musician Qais Essar, they never forget it - and music critics across the world agree.  They say that Essar builds musical bridges better than any rabab  master in history with his July 2014 album The Green Language, now available on Amazon, iTunes, and wherever quality music is sold. 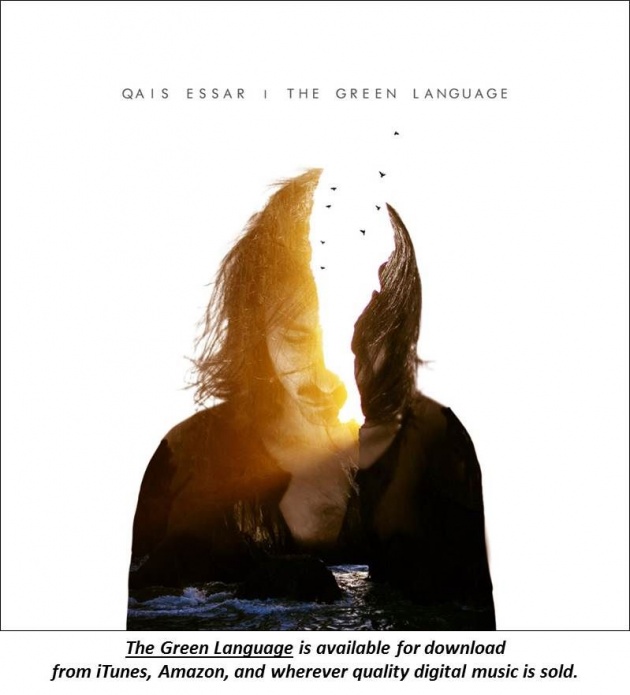 Qais Essar is an internationally-renowned Afghan-American rabab  artist, musician, composer, and producer. An experienced live performer, he has collaborated with many other prominent artists both in the USA and overseas.  His music has been described as “moving across the spectrum of time, space and culture” with strength, focus and agility as he works the strings of his treasured rabab.

Essar carries on the legacy of classical rabab  as developed by legendary Ustad Mohammad Omar Khan (1905-1980), who is considered the modern “Father of the Rabab” and of today’s Afghan traditional rabab  music. But Qais Essar brings a new aspect to the musical table set by the great Ustad (master).  Essar is unique in that he also is well-trained in Western music, and is versatile in other instruments such the guitar, violin, and mandolin. He uses modern beats and rhythms with the fluency of a rock-and-roll star, and merges them in revolutionary ways with ancient ones. 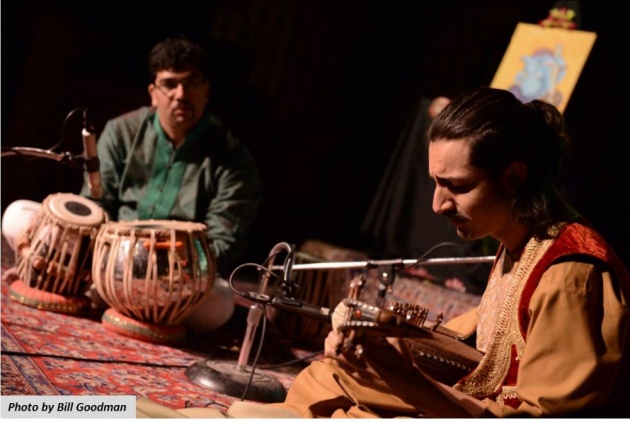 Qais Essar continues growing Afghan classical rabab  music in new directions, revealing this ancient treasure to today’s world.  With the release of The Green Language album and its first single and music video Transmutation, Essar and his ever-present rabab  take an unprecedented leap into the 21st century global music frontier.

Qais Essar speaks here in an exclusive interview with Edward Zellem, a U.S. Navy captain and the award-winning author of three bilingual books of Afghan Proverbs.

Edward Zellem: Qais jaan, it’s a privilege to speak with you.  Your work bringing rabab  to the international music scene reminds us of a famous Afghan Pashto Proverb:

Qais Essar: Thank you, Edward jaan.  Helping bring the rabab  and Afghan traditional music to a world audience is itself a great privilege. Rabab  music is similar to Afghan Proverbs in a way; they both represent ancient wisdom and beauty that are just as relevant today as they were a thousand years ago.  In today’s world, we need as much wisdom and beauty as we can get.  We should always look for new sources - and that includes rediscoveries or reinterpretations of the past.  Like precious jewels, wisdom and beauty endure forever. They cannot remain hidden even in ashes, just as this brilliant Afghan matal (‘Proverb’ in Pashto) reminds us. 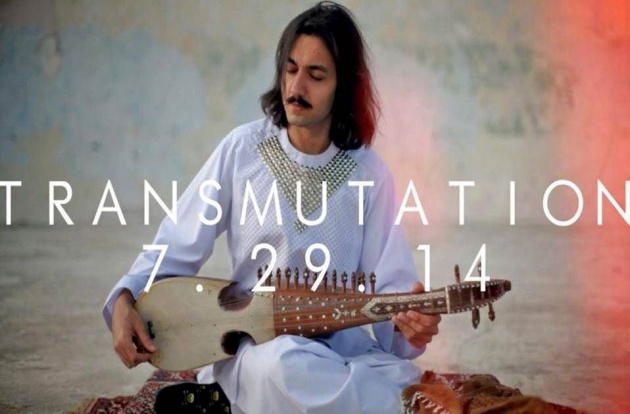 EZ:   Tell us more about the rabab itself. What makes it so unique?

QE:  The rabab  is an Afghan lute instrument that originated in Central Asia over 2500 years ago.  Ancient Sufi poets wrote of it often and lovingly.  Today, it continues to capture the hearts of audiences with its charming and sweet tones, typically used either in a classical or folk music fashion. It has a goatskin face with 3 core strings, 2-3 drone strings, and 11-15 sympathetic strings depending on its size (tuned to the specific raga).  It is struck with a wooden plectrum and produces a deep ambient timbre that is unrivaled by any other instrument. The best rababs  are handcrafted in Afghan mulberry wood, and are objects of true beauty and reverence. 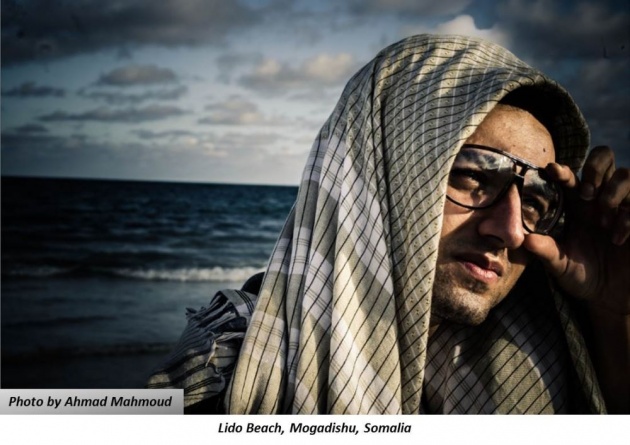 EZ: Your 2013 performance at the Mogadishu Music Festival in Somalia was not just an act of art and charity. It was a conscious act of courage in one of the world’s most  dangerous places.  What did you learn there?

QA:  I can say without doubt that it will forever be one of the choice moments in my musical journey, and I will always look back on it fondly.  I accompanied Ariana Delawari in her four piece ensemble that featured myself, Neelamjit Dhillon on tabla, and Robin Ryczek on cello. We were part of a coalition of musicians, filmmakers, and others in the Mogadishu Music Festival, which was produced by Humanitarian Bazaar in Somalia in the spring of 2013. It an was honor to one of the first international musicians to perform in Somalia in over twenty years.  All of this is featured in a documentary film called Live from Mogadishu.

It was a surreal experience walking the streets in Mogadishu, as there are so many parallels with Kabul immediately post-Taliban. It’s a bullet-riddled city again finding its footing, and hopefully on the eve of liberation 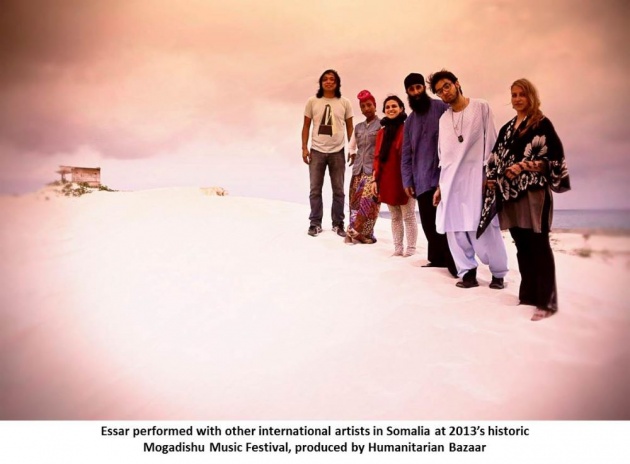 EZ: How does your new album The Green Language bring together Eastern and Western musical traditions?  How is your approach to rabab  fusion different from other attempts?

QE:  So far, this ancient instrument largely has been confined within the traditions of Eastern classical and folk music.  It is my intention to take the rabab  and herald it into the 21st century. I would like to think that my latest work is an amalgamation of both Eastern and Western classical forms.  For example, it often borrows harmony from Western traditions, while drawing rhythms from the East.  This "fusion" further introduces the rabab  to a larger audience.

Eastern/Western musical fusion has been explored since the mid-20th century. However, I have often noticed that it is not so much a pure fusion, but instead resembles two different traditions superimposed on one another.  So if you were to take one of them out, there would exist something with an identity of its own.  Being a student of not only Eastern but Western music as well, I have made a humble attempt of fusion as I understand it - trying to weave both worlds together in a such way that these two different forms become interdependent and one. 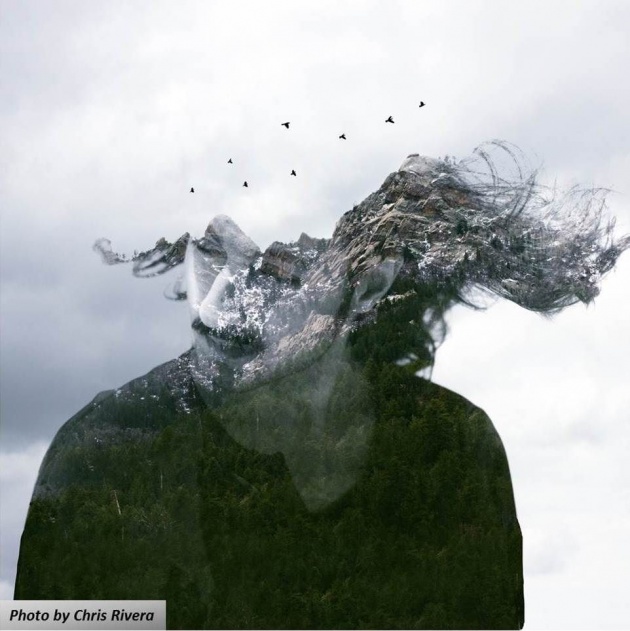 EZ: We can hear that fusion in songs like Transmutation, from your latest album The Green Language.  It’s unforgettable.  But what IS “The Green Language?” Can it be learned or interpreted, like written and spoken languages?

QE:  The Green Language is another name for "The Language of the Birds," heralded in ancient sciences as a secret and perfect language in which lies access to all knowledge. The Green Language is the language of nature - and what’s more natural than music? Our world is composed of music, a collection of frequencies vibrating at different rates. This music and the knowledge it holds is all around us. We just need to listen. 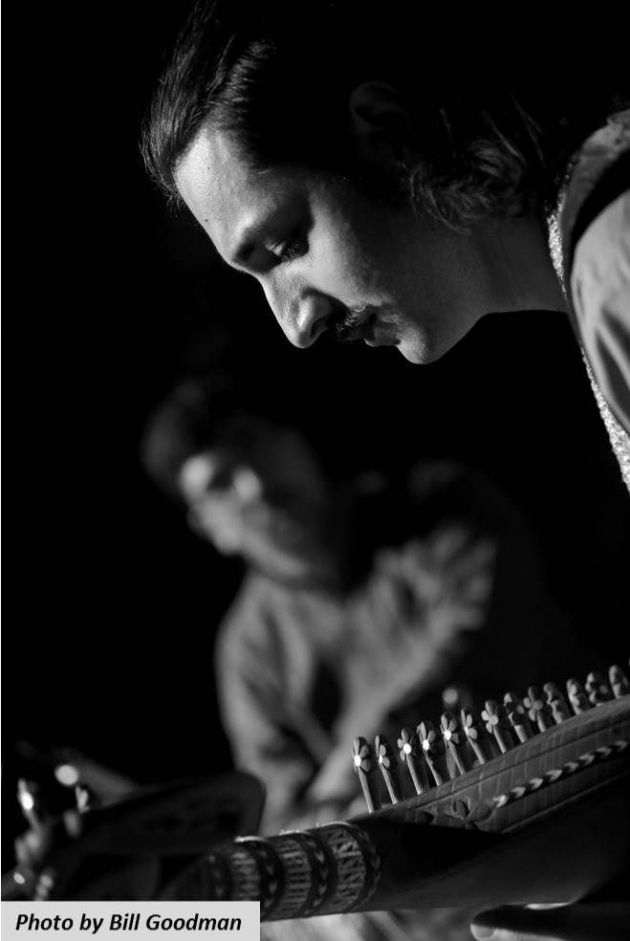 EZ: Most art and music was illegal under the rule of the Taliban.  What would you say to someone who says you should not make music?

QE: Music and art fuels revolutions and bolsters morale among the oppressed. The Taliban's ban of music and art was a strategic one, not just the default radical fundamentalist reasoning and interpretation of religion. The dictator, the despot, or the religiously zealous militant group - all understand this fact. Quelling freedom of artistic expression is a way to clip the wings of a people, and to maintain rule.

My reply to the person who says I should not make music? I have no reply, because I have no way to process that reality in my head. Do not make music?  At least in my own personal case, I would liken this to do not breathe.  It’s cheesy, but whatever. It’s a powerful and fitting analogy. Music is not a right that you can just take away from someone. I figure I would have a confused look on my face as I stood there and processed it. Barring a miraculous argument, I would simply turn and walk the other way. 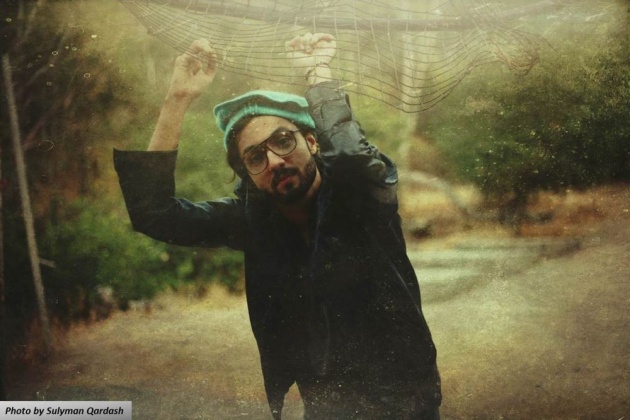 EZ:   What inspires you?

QE:  Life. Life, and all it entails, from the explosive avian orchestra that greets the sun at daybreak, to the beauty that can be found and cultured from despair.  I not only look to the music of those that have come before me, but I also draw inspiration from history, mathematics, the sciences, mythology and folklore.

I imagine it rather difficult not to feel something just existing in a place and point, however grand or however minuscule. The difference between me and someone else perhaps, is that maybe I will then translate these feelings into music, as it seems I am inept in other forms of expression.

EZ: You’re hardly inept, Qais jaan.  How about another form of expression – what is your favorite Afghan Proverb, and why?

I believe that anything is possible, but that it takes time. One must be steadfast in the practice of patience, which is an essential element of success. 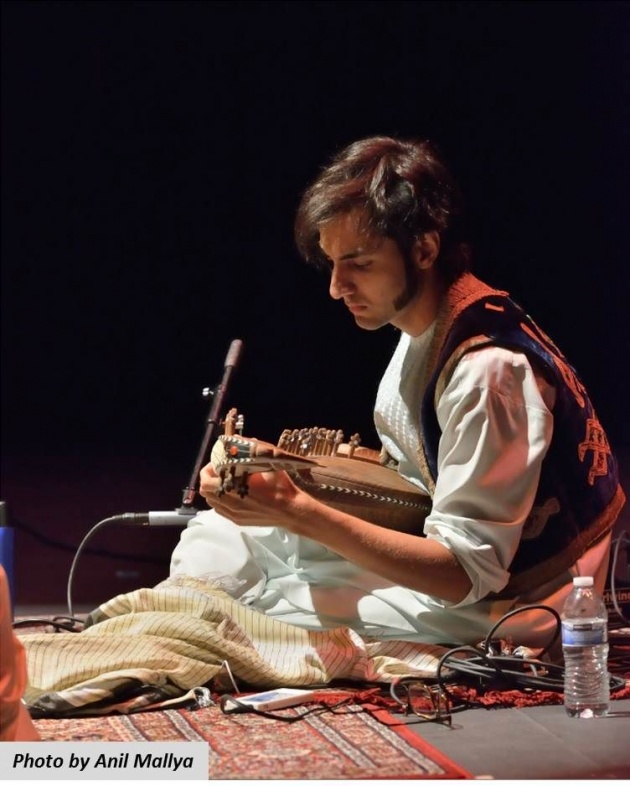 EZ: Where can people get and listen to your music?

QE: The Green Language album is available worldwide digitally from all online platforms such as iTunes, Amazon, etc. Physical CD's are available through my website, www.therabab.com. 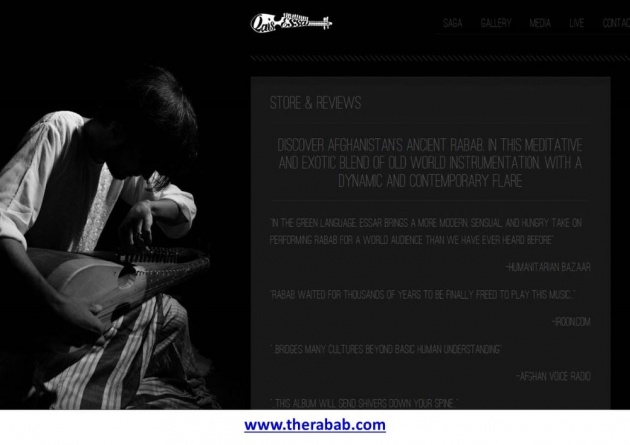 EZ: What are your plans for the future?

QE:  I will continue to forge ahead as I have. I have the extreme pleasure of seeing the rewards of my efforts in my lifetime, which is a luxury not enjoyed by all.  Through my music and performances throughout the world, I will try to continue to introduce an accurate portrayal of not just Afghan art and music, but of Afghanistan as a whole.  I believe that as an Afghan artist, you have a certain responsibility almost like an ambassador has.  It’s a responsibility to show the world that Afghanistan was - and still is - a place where culture and music can flourish, free, and liberal and progressive.

We have a responsibility to be an accurate source of information, not like sensationalist media that presents narratives in ways that satisfy their agendas. I feel a personal responsibility to maintain the legacy of classical music tradition, which has lost some of the prestige it once had and has become more like a novelty - enjoying only a niche audience. 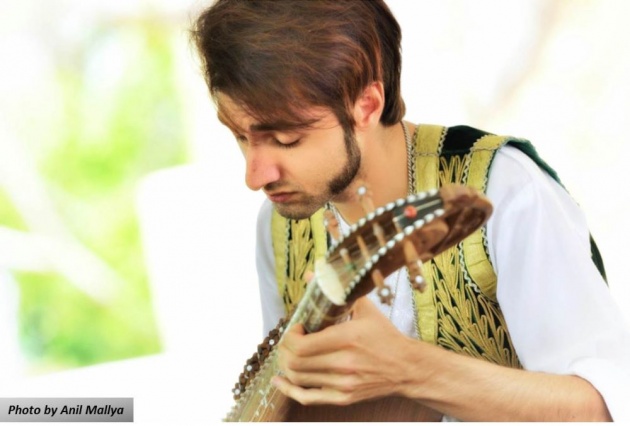 I have met many dear friends, and have gained the support of amazing people on my course. Though difficult, this is a challenge I humbly accept and intend to see through.

I've passed the point where turning back would have even been an option. There is nowhere to go but forward.

EZ:  Qais jaan, besyaar khoobash – that’s awesome, brother. Your words are as inspiring as your music. Maanda nabosheyn – be tireless.

To be notified of new celebrity and thought leader interviews with Edward Zellem,

subscribe now using the blue button at the bottom of this page.