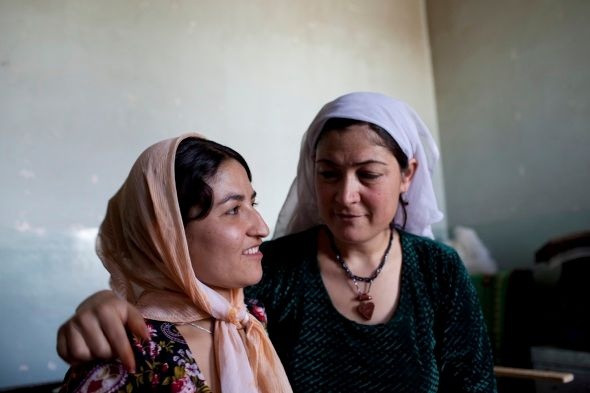 Thirteen years since the world pledged its support to help rebuild Afghanistan, to turn it into a country equipped with fair and equitable laws, with standards to address the status of women, a lot has been achieved, but a lot remains to be done.

The lives of Afghan women have greatly improved since 2001 in terms of women’s rights, participation in education, employment and public life; however, nine out of ten women over the age of 15 are still illiterate and violence against women remains endemic.

The horrors experienced by Afghan women during the decades of war have left indelible marks on our collective memory. For different groups, trying to undo this harm for one half of the population has been cause for hope, as well as for suspicion and resentment.

The chadori-clad faceless Afghan woman became, for many years, a visual symbol of ultimate subjugation and imprisonment of individual will.

The world today looks on with a mixture of hope and despair as women in Afghanistan continue to be victims of violence, of half-heartedly fulfilled pledges and weakly implemented laws, and wonders if all the investment in women’s rights really made any difference.

As an Afghan woman, and the representative of a non-governmental organization that works for the protection and promotion of women’s rights, I have witnessed unimaginable levels of resilience and strength amongst the women I have met.

No discrimination, violence or deprivation have been able to beat down the spirit of the Afghan woman, who has risen from every fall with renewed determination and courage.

The same father who hangs his head with embarrassment at the news of the birth of a girl, the brother who conceals the very existence of his sister – they have known the undervalued women in their lives to take on responsibilities of entire families when the men died, abandoned their responsibilities, or sank into despair or drugs.

At such times, the so-called weak and vulnerable women have been the ones to stand up and keep the business of life going.

A colleague, who is a prominent women’s rights activist and one of several daughters, describes being discriminated against by her own family and given less opportunity to develop. However, like many others, she used her personal strength to fight the status quo, and today is the head of an Afghan women’s organization.

We have a member of staff whose husband abandoned her with two little kids and married another woman. She is barely literate and very poor, but she did not throw up her hands and give up; she continues to struggle and work to support her children.

Today, the condition of the Afghan woman is far from ideal, but she is no longer just a nameless, faceless, mute victim of unjust traditions.

Millions of women and girls are getting an education, thousands are financially independent, and hundreds of women are networking, calling attention to the issues of violence and discrimination against women and in doing so, facing threats to themselves and their families.

I believe women are coming to the realization that no-one will give them their rights; they must reach out and take them as human beings, as Muslims and as citizens. The way to get there is through education – for both men and women. A strong, educated mother will result in strong, educated children.

Afghan men have also come a long way, but they still need reminding that women are of equal wisdom and worth and should be given the same opportunities. Afghan women have the right to participate in all peace and security discussions about their country, and the participation of Afghan women at this London Conference is crucial to its success.

I would like our international partners to acknowledge the progress Afghan women have made in the past decade. To trust our sense of purpose and determination, knowing that we are on the path of self-realization, and believe that we must be part of the conversation to determine the strategy best suited to our reality and context.

I am proud my organization will be there to represent Afghan women at the Ayenda conference, the civil-society segment of the London Conference on Afghanistan. Ayenda means ‘Future’ in Dari. The future for Afghanistan’s women and girls is at stake and London is our chance to tell the world that and plead for continued support.

Zulaikha Rafiq is the Director of Afghan Women’s Educations Centre (AWEC), a leading NGO in Afghanistan for the empowerment of women.

On 3 December, the British & Irish Agencies Afghanistan Group (BAAG) will bring together over 200 professionals from leading Afghan and international charities, development and human rights organizations, including Christian Aid partner AWEC, in the Ayenda Conference.