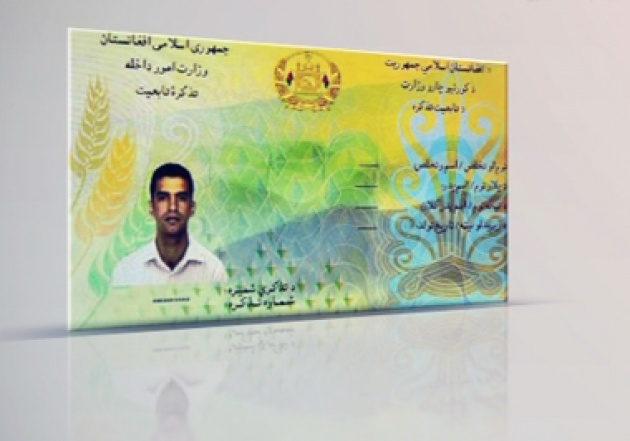 The Ministry of Communication and Information Technology announced that Afghanistan’s first electronic ID cards would be distributed in the beginning of the next Afghan calendar year (the month of Hamal).

The national identity project contract was awarded to Grand Technology Resources (GTR), a local ICT company which has renowned foreign companies such as Hyundai It-South Korea, IRIS-Malaysia and entrust-North America as its partners.

It is worth mentioning that the implementation of this project will allow the government to give new National ID cards which are very secure, modular, scalable and robust and based on a very innovative ICT platform, to all the citizens of Afghanistan.

The project will introduce new electronic National ID system on a smartcard multi-application chip platform, which will allow additional applications such as Drivers’ License, Vehicle Registration, Digital Signature and Voters’ List management in the current scope, whereas e-Passport, e-Voting and e-Taxing will be part of its future prospective package.

The new National ID system will enable the government to establish a very accurate, up to date and effective database of the census of the country’s population, their movement, and addresses, age categories and many more.  This in turn will enable the government to prepare very effective and efficient development plans as well as public services projects and simplify business and public processes and procedures, and by doing so remove the very complicated government procedures and tackle the issue of corruption.

The total cost of this project, which will be implemented within 36 months, amounts to USD101.5 Million to be paid from the Development budget of the Ministry of Finance. The project is planned to be implemented in three phases. Phase one will cover Kabul province in 8 months from the signing date. Phase two of the project will cover 15 provinces within a period of 12 months, and finally the 3rd phase will cover the remaining 18 provinces in 16 months.

The project will be carried in collaboration with the Ministry of Interior.

This is great, this new patent filled in with Master Card, will make things much easier. Users now c…