Africa is the world's second-largest and second-most-populous continent. At about 30.2 million km2 (11.7 million square miles) including adjacent islands, it covers six percent of Earth's total surface area and 20.4 percent of its total land area.[2] With 1.1 billion people as of 2013, it accounts for about 15% of the world's human population.[1] The continent is surrounded by the Mediterranean Sea to the north, both the Suez Canal and the Red Sea along the Sinai Peninsula to the northeast, theIndian Ocean to the southeast, and the Atlantic Ocean to the west. The continent includes Madagascar and various archipelagos. It contains 54 fully recognizedsovereign states (countries), nine territories and two de facto independent states with limited or no recognition.[3]

Africa's population is the youngest amongst all the continents;[4][5] the median age in 2012 was 19.7, when the worldwide median age was 30.4.[6] Algeria is Africa's largest country by area, and Nigeria by population. Africa, particularly central Eastern Africa, is widely accepted as the place of origin of humans and the Hominidae clade(great apes), as evidenced by the discovery of the earliest hominids and their ancestors, as well as later ones that have been dated to around seven million years ago, including Sahelanthropus tchadensis, Australopithecus africanus, A. afarensis, Homo erectus, H. habilis and H. ergaster – with the earliest Homo sapiens (modern human) found in Ethiopia being dated to circa 200,000 years ago.[7] Africa straddles the equator and encompasses numerous climate areas; it is the only continent to stretch from the northern temperate to southern temperate zones.[8]

Africa hosts a large diversity of ethnicities, cultures and languages. In the late 19th century European countries colonized most of Africa. Most modern states in Africa originate from a process of decolonization in the 20th century.

Etymology
Afri was a Latin name used to refer to the inhabitants of Africa, which in its widest sense referred to all lands south of the Mediterranean (Ancient Libya).[9][10] This name seems to have originally referred to a nativeLibyan tribe; see Terence#Biography for discussion. The name is usually connected with Hebrew ʿafar "dust", but a 1981 hypothesis[11] has asserted that it stems from the Berber ifri (plural ifran) "cave", in reference to cave dwellers.[12] The same word[12] may be found in the name of the Banu Ifran from Algeria and Tripolitania, a Berber tribe originally from Yafran (also known as Ifrane) in northwestern Libya.[13]

Under Roman rule, Carthage became the capital of the province of Africa Proconsularis, which also included the coastal part of modern Libya.[14] The Latin suffix "-ica" can sometimes be used to denote a land (e.g., in Celtica from Celtae, as used by Julius Caesar). The later Muslim kingdom of Ifriqiya, modern-day Tunisia, also preserved a form of the name.

According to the ancient Romans, Africa lay to the west of Egypt, while "Asia" was used to refer to Anatolia and lands to the east. A definite line was drawn between the two continents by the geographer Ptolemy(85–165 AD), indicating Alexandria along the Prime Meridian and making the isthmus of Suez and the Red Sea the boundary between Asia and Africa. As Europeans came to understand the real extent of the continent, the idea of "Africa" expanded with their knowledge.

Other etymological hypotheses have been postulated for the ancient name "Africa":

The 1st-century Jewish historian Flavius Josephus (Ant. 1.15) asserted that it was named for Epher, grandson of Abraham according to Gen. 25:4, whose descendants, he claimed, had invaded Libya.
Isidore of Seville in Etymologiae XIV.5.2. suggests "Africa comes from the Latin aprica, meaning "sunny".
Massey, in 1881, states that Africa is derived from the Egyptian af-rui-ka, meaning "to turn toward the opening of the Ka." The Ka is the energetic double of every person and the "opening of the Ka" refers to a womb or birthplace. Africa would be, for the Egyptians, "the birthplace."[15]
Yet another hypothesis was proposed by Michèle Fruyt,[16] linking the Latin word with africus "south wind", which would be of Umbrian origin and mean originally "rainy wind".
Robert R. Stieglitz of Rutgers University proposes that: "The name Africa, derived from the Latin *Aphir-ic-a, is cognate to Hebrew Ophir."[17]
History
Main article: History of Africa
Further information: History of North Africa, History of West Africa, History of Central Africa, History of East Africa and History of Southern Africa
Prehistory
Main article: Recent African origin of modern humans

Lucy, an Australopithecus afarensis skeleton discovered on November 24, 1974, in theAwash Valley of Ethiopia'sAfar Depression
Africa is considered by most paleoanthropologists to be the oldest inhabited territory on Earth, with the human species originating from the continent.[18][19] During the middle of the 20th century, anthropologists discovered many fossils and evidence of human occupation perhaps as early as 7 million years ago. Fossil remains of several species of early apelike humans thought to have evolved into modern man, such as Australopithecus afarensis (radiometrically dated to approximately 3.9–3.0 million years BC),[20] Paranthropus boisei (c. 2.3–1.4 million years BC)[21] and Homo ergaster (c. 1.9 million–600,000 years BC) have been discovered.[2]

After the evolution of Homo sapiens sapiens approximately 150,000 to 100,000 years ago in Africa, the continent was mainly populated by groups of hunter-gatherers.[22][23][24] These first modern humans left Africa and populated the rest of the globe during the Out of Africa II migration dated to approximately 50,000 years ago, exiting the continent either acrossBab-el-Mandeb over the Red Sea,[25][26] the Strait of Gibraltar in Morocco,[27] or the Isthmus of Suez in Egypt.[28]

Other migrations of these modern humans within the African continent have been dated to that time, with evidence of early human settlement found in Southern Africa, Southeast Africa, North Africa, and the Sahara.[29]

The size of the Sahara has historically been extremely variable, with its area rapidly fluctuating and at times disappearing depending on global climactic conditions.[30] At the end of theIce ages, estimated to have been around 10,500 BC, the Sahara had again become a green fertile valley, and its African populations returned from the interior and coastal highlands inSub-Saharan Africa, with rock art paintings depicting a fertile Sahara and large populations discovered in Tassili n'Ajjer dating back perhaps 10 millennia.[31] However, the warming and drying climate meant that by 5000 BC, the Sahara region was becoming increasingly dry and hostile. Around 3500 B.C., due to a tilt in the earth's orbit, the Sahara experienced a period of rapid desertification.[32] The population trekked out of the Sahara region towards the Nile Valley below the Second Cataract where they made permanent or semi-permanent settlements. A major climatic recession occurred, lessening the heavy and persistent rains in Central and Eastern Africa. Since this time, dry conditions have prevailed in Eastern Africa and, increasingly during the last 200 years, in Ethiopia.

The domestication of cattle in Africa preceded agriculture and seems to have existed alongside hunter-gatherer cultures. It is speculated that by 6000 BC, cattle were already domesticated in North Africa.[33] In the Sahara-Nile complex, people domesticated many animals, including the donkey and a small screw-horned goat which was common from Algeriato Nubia. In the year 4000 BC, the climate of the Sahara started to become drier at an exceedingly fast pace.[34] This climate change caused lakes and rivers to shrink significantly and caused increasing desertification. This, in turn, decreased the amount of land conducive to settlements and helped to cause migrations of farming communities to the more tropical climate of West Africa.[34]

By the first millennium BC, ironworking had been introduced in Northern Africa and quickly spread across the Sahara into the northern parts of sub-Saharan Africa,[35] and by 500 BC, metalworking began to become commonplace in West Africa. Ironworking was fully established by roughly 500 BC in many areas of East and West Africa, although other regions didn't begin ironworking until the early centuries AD. Copper objects from Egypt, North Africa, Nubia, and Ethiopia dating from around 500 BC have been excavated in West Africa, suggesting that Trans-Saharan tradenetworks had been established by this date.[34] 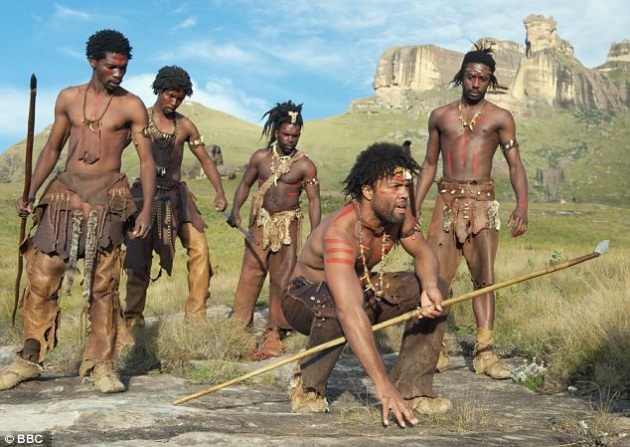