After Diana, Kate reinvents the job of princess 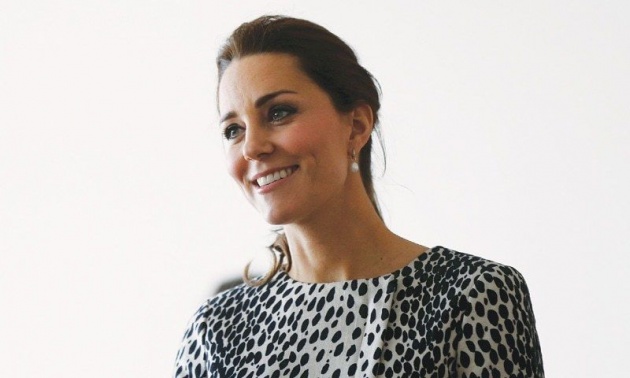 LONDON: Few mothers taking a new baby home would want a crowd of photographers snapping them from every angle at the hospital door, but Kate, future Queen of England, is likely to handle the bizarre situation like a consummate professional.

Since marrying Prince William in 2011, Kate has learnt how to be a princess for the era of 24-hour news: always beautifully dressed, smiling for the cameras, she has withstood scrutiny and done nothing controversial.

The birth of her second child, expected imminently, will attract a media circus like the one that greeted the arrival of her firstborn, Prince George, in 2013, reflecting global interest in the young royal couple and their family.

It is a peculiar kind of stardom. Her image is ubiquitous on the front pages, fans cheer her at every stage-managed appearance, and the clothes she wears sell out in a flash, yet Kate has revealed very little of substance about herself.

“She’s popular for the same reason the Queen is. They’re both people who say almost nothing but on to whom others are able to project the things that they like,” said Catherine Mayer, who wrote about Kate in the US magazine Time when it selected her as a runner-up for the title of “Person of the Year” in 2011.

But there is a flipside to a fame built on beauty, glamour and the old-fashioned fairytale fantasy of marrying a prince.

“It’s an amazingly intrusive kind of coverage that only women undergo and it means that at some point it will also turn because inevitably she will get older,” said Mayer.

An early sign of that came in February when the Daily Mail, Britain’s second-biggest selling newspaper which also has one of the largest English online readerships in the world, published a close-up image of the back of Kate’s head on its front page.

“Oh Kate, are you really showing grey roots at 33?” it asked.

Critics said the sympathetic headline was merely cover for an unflattering image that fuelled unhealthy obsessions about youth and beauty, piling unrealistic pressures on women.

How Kate felt about the photo, or indeed about her place in a debate about feminist issues, is not known.

Whatever the headlines, Kate is hugely popular. A ComRes poll conducted on April 8-9 found that 78 per cent of respondents liked her, cutting across gender, age, class and geographical lines that divide Britons on other subjects.

Only William, his younger brother Prince Harry and their grandmother Queen Elizabeth enjoyed similar ratings. Charles, the heir to the throne, and his wife Camilla trailed far behind.

Kate’s popularity has helped to restore the royal family’s standing after it was battered in the 1990s by Charles’ divorce from his first wife Diana, and by the widely criticised handling of Diana’s death in a car crash in 1997.

While Kate is following in the revered Diana’s footsteps in terms of her glamour and fashion sense, she has turned out to be a very different kind of princess, as described in a lengthy essay by Booker Prize-winning author Hilary Mantel.

“Diana was capable of transforming herself from galumphing schoolgirl to ice queen, from wraith to Amazon. Kate seems capable of going from perfect bride to perfect mother, with no messy deviation,” Mantel wrote in the London Review of Books.

In a celebrity-obsessed age, it is unlikely that the media or the public will heed Mantel’s call to “back off and not be brutes”, but Kate is perhaps better equipped than Diana was to withstand the glare of the flashbulbs.

One difference is that William and Kate dated for years before marrying and appear happy together, so that they face the world united, unlike Charles and Diana, who did not know each other as well when they married and were soon unhappy.

Broadcaster Steve Hewlett, who made a documentary for the BBC about the royal family and the press, said the trauma of their divorce and of Diana’s death while being pursued by photographers was still playing out for William and Kate.

“He is highly controlling of press access, for perfectly understandable reasons, and the last thing he wants is for the media to find their way into their private life,” said Hewlett.

But that could start posing a challenge for the couple.

“Public interest in William and Kate is not going to go away and it’s a beast that to some extent has to be fed if it’s not to run the risk of provoking negative reaction,” said Hewlett.

As Mantel put it: “Adulation can swing to persecution, within hours, within the same press report.”

MISBAH-UL-HAQ  : A Great Player . A leader of Cricketers

What happened to kate upton at zero gravity Greetings Summoners!Here are this week's free champions: Diana-Scorn of the Moon Attack Defe…