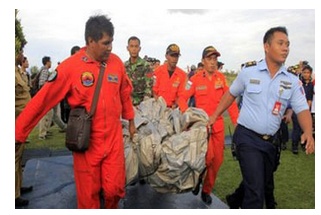 Efforts to locate victims and wreckage of AirAsia flight QZ8501 which crashed into the Java Sea in Indonesia on Sunday are being hampered by stormy weather and strong tides.

Indonesian officials have confirmed that remains and debris found in the waters off Borneo are from the plane.

The authorities have confirmed that six bodies have now been retrieved.

The Airbus A320-200, carrying 162 people from Surabaya in Indonesia to Singapore, disappeared on Sunday.

Indonesian President Joko Widodo has promised a "massive search by the ships and helicopters" with the focus on recovering the bodies of victims.

"I feel the loss from this tragedy and we all pray for the families to be given fortitude and strength," he said, speaking in Surabaya.

As the relatives of the QZ8501 passengers and crew wait for the bodies of their loved ones to return to Surabaya, the Indonesian officials are trying to assure them that everything is being done to ensure a swift process.

It is day four since the aircraft went missing from the radar and concerns are growing that the remains will be too difficult to identify. News of bad weather hampering the recovery efforts is another setback for the grieving relatives.

Many say the government and Air Asia have been handling the tragedy as well as they could but all the relatives want is for their loved ones to be properly identified so they can be laid to rest.

Aircraft from several countries were set to scan the sea in the early hours of Wednesday morning. Divers were also being deployed to search for bodies and for the plane's "black box" flight recorders.

But officials said heavy rain, strong winds and waves of up to 3m (10ft) had forced them to suspend the air operation, though ships already in place were continuing the search.

The head of Indonesia's National Search and Rescue Agency, Bambang Soelistyo, said six bodies had now been found. One was a woman wearing cabin crew uniform.

The bodies had been taken on to a ship and would be brought to the nearest town, Pangkalan Bun, as soon as the weather improved, he said.

The navy had reported on Tuesday that more than 40 bodies had been recovered, but spokesman Manahan Simorangkir later told AFP news agency the figure had been a miscommunication by his staff.
'Shadow' under water

Flight QZ8501 went missing on Sunday on a routine flight from Surabaya in Indonesia to Singapore.

On board the plane were 137 adult passengers, 17 children and one infant, along with two pilots and five crew.

Most were Indonesian but the passengers included one UK national, a Malaysian, a Singaporean and three South Koreans.

It is not yet clear what happened to the plane but its last communication was a request from air traffic control to move up to avoid bad weather. The pilot never responded when given permission.

A three-day search ended on Tuesday when remains including aircraft parts, luggage and the bodies believed to be passengers were found in the Karimata Strait, south-west of Pangkalan Bun in the Borneo province of Central Kalimantan.

Bambang Soelistyo said a shadow had been spotted under the water, which appeared to be in the shape of a plane.

Pictures of debris and bodies were shown on Indonesian TV to distraught relatives waiting at Surabaya's Juanda international airport.

Those watching the pictures were visibly shocked, with some collapsing.

The search is being led by Indonesia but is a multinational effort. Singapore has sent ships equipped with sensors to detect pings that may be emitted from the plane's black boxes.

Malaysia, Australia and Thailand are also involved, while the US destroyer USS Sampson has been sent to the zone.

AirAsia previously had an excellent safety record and there were no fatal accidents involving its aircraft.

The head of the airline, Tony Fernandes, said he was "absolutely devastated" and that the priority was on the wellbeing of passengers' families.