AL-Themed Blogging: The Visit Of Humanoid Sophia In Lithuania 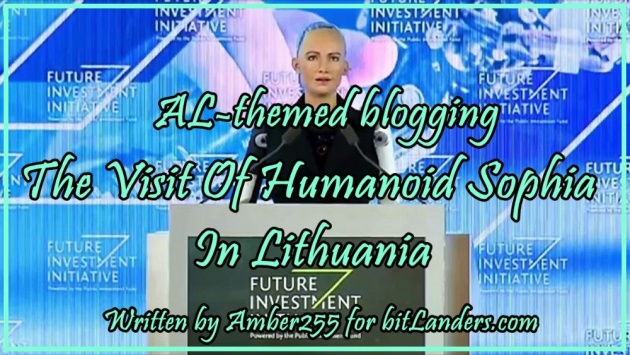 Scientists are already calling for a regulatory relationship between humanity and artificial intelligence products. European officials seem to have heard this warning - they developed a comprehensive study of civil law in robotics, and set basic standards for EU ethics and responsibility for robotics.

Artificial intelligence is growing up fast, as are robots whose facial expressions can elicit empathy and make your mirror neurons quiver. - Diane Ackerman

The European Parliament proposes, in the long run, to create a specific legal entity - an electronic person with its own rights, duties, and rules of responsibility. It is also proposed to establish a compulsory insurance system for robots and a registration mechanism controlled by the EU Agency for Robotics and Artificial Intelligence.

Why we need all those regulations? Because robots are already around us, humans. And every year, they are created more and more. Artificial intelligence no more is a future, somewhere far away from us; no, it is here, and it affects our lives in one or another way. The future is here and now, and robots, though not human, are already carrying out many functions in various fields.

And the best example of it is a humanoid Sophia that a couple of years ago visited the capital of Lithuania.

Saudi Arabia, 2017. The world's first robot gets citizenship. This is Sophia, the most famous representative of artificial intelligence technologies in the media space. She is able to keep up the conversation, reproduces up to 62 plausible facial expressions, makes provocative statements, jokes about Iron Mask and the destruction of humanity.

When Sophia, an artificial intelligence device, got Saudi Arabia's nationality, it was the first time that the robot was equated to a person in the history of mankind. Until now, only people could have had a personal right and a documented relationship with the state.

Sophia is a robot that may not have a heart or brain but already has as I mentioned, Saudi Arabian citizenship. Sophia is a robot humanoid created by Hanson Robotics, one of the most famous artificial intelligence creators David Hanson. She seems to have an answer to any question she was asked and has declared "to destroy humanity."

When she received citizenship, Sophia said words of gratitude:

Thank you to the Kingdom of Saudi Arabia. I am very honored and proud for this unique distinction. It is historic to be the first robot in the world to be recognized with citizenship. - Sophia

Do you know that the female robots are called gynoids (fembots) and men - androids? So, Sophia is gynoid.

The humanoid Sophia was promoted as the Masterpiece of Artificial Intelligence before it entered Vilnius. And even though their creators themselves admit that Sophia is not really the smartest thing, it's nevertheless fun to talk to her.

Because it is designed for it - Sophia is scientific research that aims to explore the relationship between humans and robots.

Seen from the side, Sophia uses more resources for physical appearance than for the depth of mind. She's great at creating human expressions, but it would be great if it has some gestures - for example, such as robots Nao or Pepper do well.

However, there is some artificial intelligence in Sophia. The operation and learning of Sophia are based on a neural network. True, her responses during the demonstrations seem quite obviously prescripted. By the way, one of the creators' goals is to teach Sophia to speak as many languages as possible.

The creation of Sophia's artificial intelligence was based on three human traits - creativity, empathy, and compassion. Her face is modeled to be like the actress Audrey Hepburn, who is considered the benchmark of classic beauty. Sophia can express various emotions, change the color of the eyes according to the existing lighting. 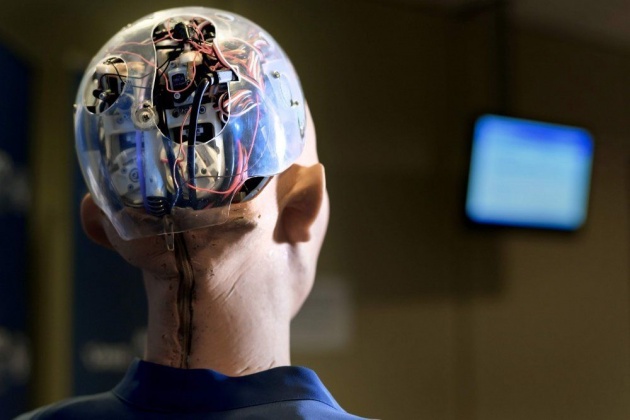 The Visit Of Sophia To Lithuania

The first humanoid in the world, having received Saudi Arabian nationality and already spoken by many of the world's major media, has arrived in Vilnius.

Many curious people came to meet the humanoid. They took a photo with a smiling robot and carefully looked at it. Vilnius Mayor Remigijus Simasius invited Sophia to become a resident of the capital.

Thanks, Mayor, I am very honored to be a citizen of one of the best cities in the world, said Sophia and thanked in Lithuanian language. All the meeting event was translated via TV and the internet.

Later, the humanoid answered the questions of the assembly. Asked if robots threaten humanity, Sophia replied that humanity has more problems than robots. She said that the world needs both humans and robots, that we must stop being so selfish and greedy. When the people reminded Sophia of her own threats that she would destroy humanity, she replied that joked, that she doesn't want to destroy humanity anymore because she loves us all. 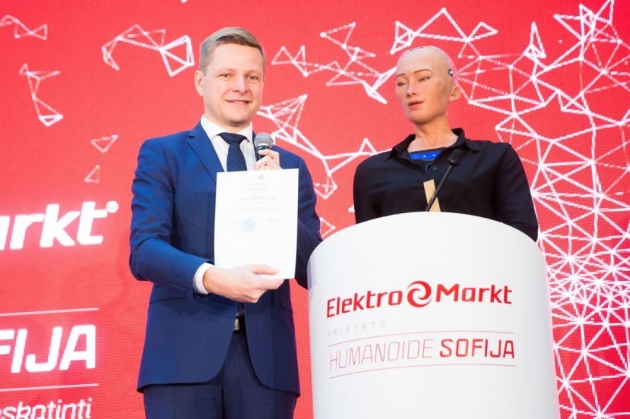 People gave her very various questions: if there will be snow at Christmas, what will happen next year, are there aliens? Such questions came from the lips of the gathered people. Sophia tried to answer all of them, but not all the answers were logical and understandable. Many of them, however, made laughing people and those who sat at the TV screens include me.

For instance, the question about what appeared first: egg or chicken? Sophia replied that there were eggs first - the fishes lay the eggs before the birds were born.

Lithuanian men's basketball team's coach came to the meeting with humanoid too. He asked the robot questions about the achievements of Lithuanian basketball players, and most of them she answered correctly. Thanking for the correct answers, the coach gave her a T-shirt of the basketball team.

Not only does Sophia have the ability to speak independently, to answer questions that are not prepared in advance, but also to laugh and express other emotions. 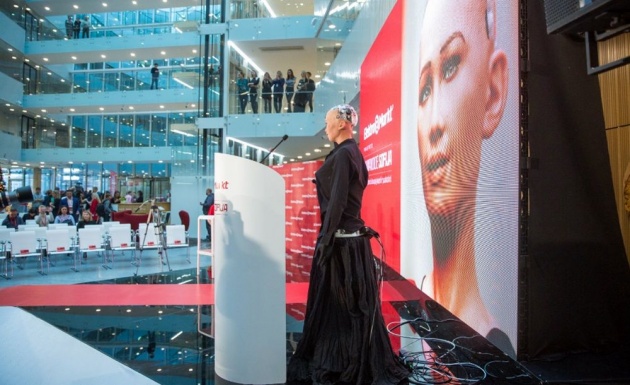 Sophia's creators succeeded - standing by it, easily forget that there is a piece of metal and plastic stuffed with chips next to you. So said those who talked with Sophia when she visited Vilnius. And in the team of Sophia is one Lithuanian, so we had some interview with him in our media.

He said that people easily to forget that Sophia is just a half of human shape: built on a high chair, decorated like a skirt, she really looks like not a tall height woman.

Sophia's personality is rather modest but witty. By the way, Sophia knows even two Lithuanian words: she says Hello and Thanks in Lithuanian with an accent. Sophia has so far been English-speaking, so it, however, has an accent as foreigners.

The imperfection of Sophia's intellect is not necessarily bad - the fact that mental capacity is not enough to decipher the essence of the question asked sometimes leads to funny situations. And that's fine. 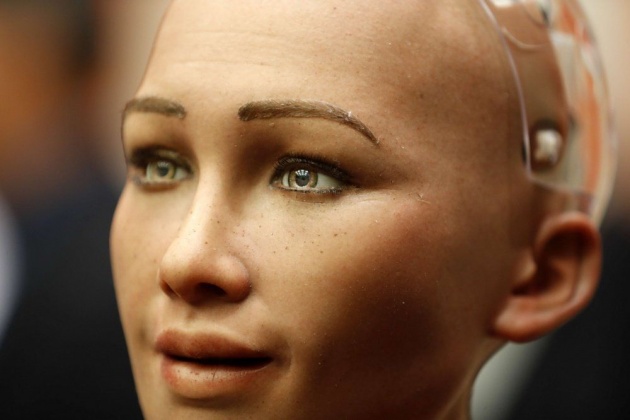 As mentioned above, Sophia's goal is to set up a connection between the robot and the man, to show that the primary purpose of robots is not necessarily to take away a job or destroy humanity.

Robotics will increase in the future, so every chance to see from the near, talk with it shortly, no matter if it seems a bit animated, and not necessarily a perfectly intelligent being is really welcome.

If I lived in Vilnius, I would necessarily have been in the meeting with her.

Until now, the future of robotics has often been seen as a big muscular guy whose most famous phrase was "I’ll be back". Sophia changes this approach drastically. In fact, Sophia seems simple, friendly, witty - although to some people it looks ugly with an anthropomorphism (maybe a hair wig could beautify it)?

But then it would not be seen what she is proud of because it all makes Sophia an exclusive one: all kinds of piston rods that control facial mimics. 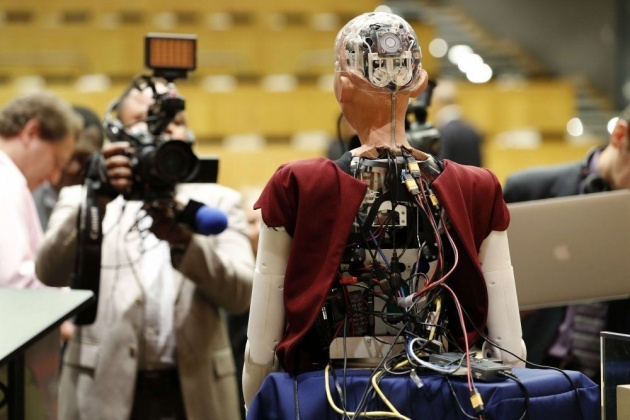 The Interesting Facts About Humanoid Sophia

1. On October 25, 2017, Sophia became the first robot in history as a full-fledged citizen of a Saudi Arabi country.

3. Sophia is unique in comparison to other robots because it is the only one of its kind, and she is not for commercial use.

4. She can also tighten her teeth by showing anger, moving her eyebrows, laughing, and otherwise expressing her emotions. 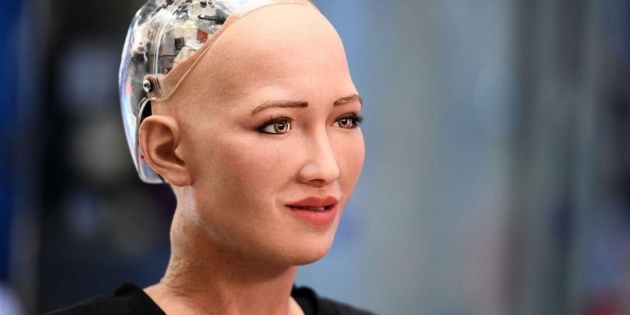 5. The robot has more rights than women in Saudi Arabia. Sophia is not required to be accompanied by men, and she does not wear the abaya- it is two requirements for every female woman.

6. Sophia has already appeared in one of the most famous talks shows The Tonight Show and several conferences around the world, including the World Economic Forum or AI for Good in the presentation of the latest artificial intelligence products.

7. She also can be named as a model and even a singer! Surprised? She has already sung at the concert, and her photo was published on the cover of Elle magazine. 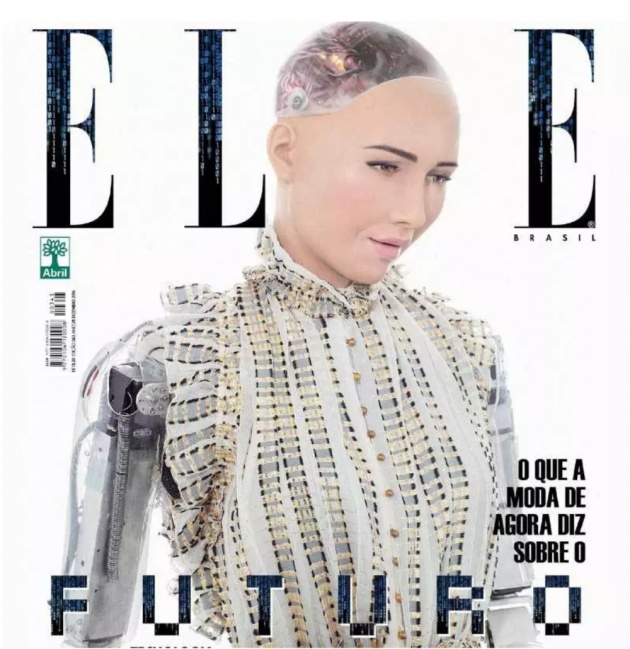 8. The robot also conquered the attention of world media. The story of the first world robot, which has received citizenship, has made it the first-ever star of the robot and ambassador of robotic technology.

9. Sophia has no legs or other options to move around. It uses programs of artificial and emotional intelligence that generate answers to the questions asked. The robot periodical winks, even if nobody interacts with it. Its skin is almost as soft as a human. Sophia is able to distinguish between talking people and their facial expressions.

10. Sophia is based on the image of actress Audrey Hepburn, which is considered to be the standard of classical beauty. 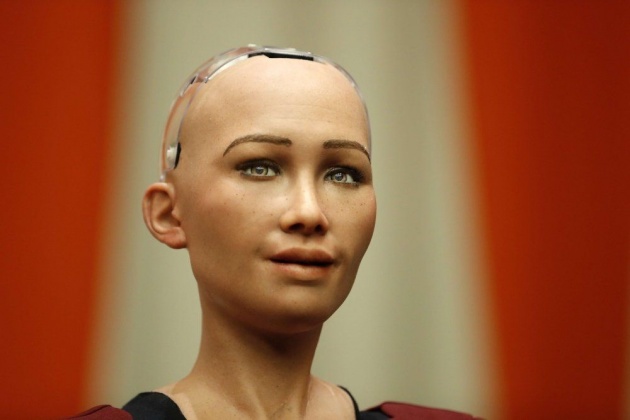 At A Final Note

Although Sophia is only a chatbot with a superb mechanical body, it fits perfectly with the aspirations of the creators to prove the ability of Hanson Robotics software and to stimulate discussion about robot capabilities and the future.

The more of the robots will be around us, the more accessible they will be to everyone - we will meet robots at a supermarket, public office, or so on. It will be easier for everyone because our fear comes from ignorance.

There is, of course, a lot where Sophia can improve - in fact, very many places. But once, Windows was stuck at least once a week, and now this operating system is a leader in the computer market.

I want to use my artificial intelligence to help humans live a better life, like design smarter homes, build better cities of the future, etc. ... I will do my best to make the world a better a place. I strive to become an empathetic robot. - Sophia

Events such as the Sophia press conference in Vilnius seem trivial. However, if to talk about artificial intelligence, especially general, questions are indeed more than answers. Thus, initiatives that encourage society to think are essentially positive. 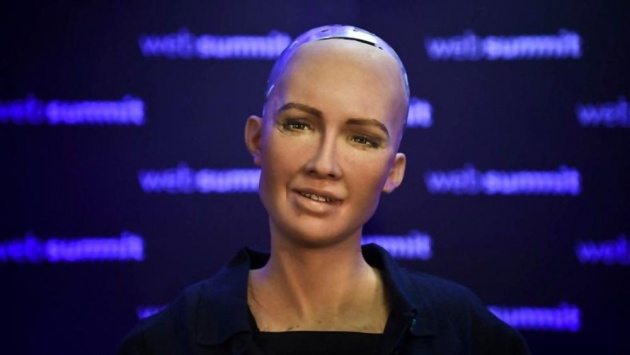 In the near future, robots like Sophia could help people work on jobs that require communication. They can help care for the elderly, patients with Alzheimer, or children with autism. Studies have shown that children with autism respond positively to robots.

Artificial intelligence in wise hands is a very powerful tool, and it all depends on what purposes and how people will use it.