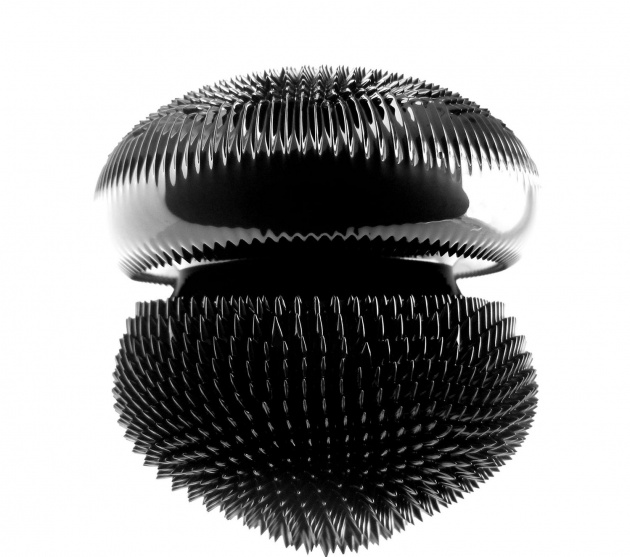 Scaramouche is pleased to present the first U.S.exhibition of artist Alessandro Brighetti. Narchitecture casts the individual parts of the human body as unique living entities. Brighetti's approach to his ferrofluid sculptures opens a new door to the understanding of anatomical and physiological readings of the body as a complex and dynamic system.

In medicine, ferrofluids are used as contrast agents for magnetic resonance imaging. In this case, the ferrofluids are composed of iron oxide nanoparticles called SPION (Superparamagnetic Iron Oxide Nanoparticles). Brighetti's almost shamanic approach to contemporary sculpture refers to a study of magnetism and its invisible forces.  Thus, biology as much as chemistry and physics, guide his thinking about the sculpture.  "By using both organs and liquid, they are forged by inner and natural tensions. They are obviously natural architectures, which then melt themselves into a new one" says Brighetti. The sculpture becomes a fictional entity, with the physical interaction between movement and magnetism resulting in harmonious, organic and hypnotic forms.

In considering the idea of organs, such as heart, brain or uterus, functioning by themselves like self-sufficient organisms, it is almost impossible not to mention the concept of the human body as a "fractal creation," that which John Briggs reveals in Fractals: The Patterns of Chaos.  Scientists researching brain activity are unsatisfied with anything less than a chaotic theory of the mind.  A primary example of chaos in the human body is found in the beating of the heart, which to our ears seems to occur with a periodic, "clock-like" regularity. The architecture of the human body is of major scientific importance and reveals that, creative processes aside, the benefits of chaotic activity in the brain are similar to those of the heart.

Narchitecture is a non-static (live) hybrid of science and art, giving us a new experience of material and its articulation.  This occurs especially in Brighetti's video works, where there is a bit of nostalgia guided by a strong visual quality, evoking a retro futurist aesthetic. Human beings today are vitally dependent on technology. At the same time, these videos demonstrate how technology disconnects us emotionally. The organic forms featured in Brighetti's videos manifest an expression of desire for a more satisfying form of communication.

Brighetti's interest in the organs of the body and his experiments with unusual materials are a tribute to a renaissance model of the artist. One can perceive the spiritual background in his work, but his understanding of substance makes his work accessible to perception and experience.  In exploring alternatives between chaos and organized systems of the human body, he sees both simple organic and human parts in his work. Brighetti says, "I like to think of my works as natural and narcotic architectures."

Alessandro Brighetti (Bologna, Italy 1978) received a graduate degree in painting in 2010 from the Accademia di Belle Arti inBologna. From a family of surgeons and research chemists, he became an autodidact in biology and medical studies. Recent exhibitions include, MAR - Museo Arte Ravenna,Italy (solo), and Primae Noctis Gallery,Lugano,Switzerland. Upcoming in 2013 is a group exhibition also curated by Lara Pan at Kunsthalle Winterthur,Switzerland, and a solo show at Galleria Primo Marella, Milan.

Lara Pan is a curator and art critic based in New York, where she founded the New Art Project platform. Her curatorial projects include, Pandora's Sound Box for Performa09; When the fairy tale never ends, inaugural exhibition of the Ford Art Project, NYC; and Wim Delvoye's Torre for the 2009 Venice Biennale at the Peggy Guggenheim Collection.