ALL ABOUT OUR UNIVERSE

The huge limitless space, with planets, satellites, asteroids, comets and billions of stars and other heavenly bodies in it is called the Universe. The space with heavenly bodies that we see through powerful telescopes or with our naked eyes is just a tiny part of The Universe. According to the theory of "Big Bang", the Universe started as result of a big explosion or "Big Bang". Before the explosion there was only a compact mass of stardust or a kind of original substance. We cannot predict the exact age of the Universe.

Scientists are of the opinion that the Solar system came into being around 4.7 billion years ago.

The Solar System is the name given to the Sun and the nine planets including our Earth that move around it. The Sun is the centre of the Solar System. 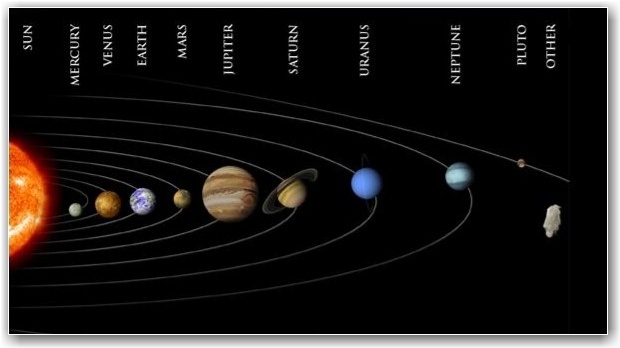 The Sun is the main source of energy i.e. light and heat. Our Earth would be a dead planet without the Sun.

The nine planet of the Solar System are listed below according to their distance from the Sun.

Following are the main points of the Planets of Solar System.

(ii)     Mercury is the smallest planet in the Solar System.

(vii)   Being nearest to the Sun it is very hot.

(i)      It is the only planet in the solar system where different kind of like exists.

(iii)   It has two satellites.

(v)   There are patches of ice on its North and South Poles.

(ii)   Its is the largest planet of the Solar System.

(v)   It is the most beautiful planet in the Solar System and is thus called "Red Star".

(v)   It is four times larger than our Earth.

(iii) It has eight satellites.

(v)  This planet can only be seen through a telescope.

(iii) It has one satellite.

(v)  It is the smallest planet in the Solar System.

Like Earth, the moon also receives light and heat from the Sun. the surface of the Moon is round and rocky. The rocks being lighter in weight than the rocks of the Earth. The surface is dotted with craters. There is no air and water on it.

The Moon revolves both round the Earth and the Sun, but this revolution has been so designed by nature that we always see the same face of the Moon. The Moon is the only natural satellite of the Earth about which it revolves at a mean distance of 384000 kilometers. Moon's motion is clockwise, but because the Earth rotates in the same direction at a much greater speed, the Moon's apparent daily motion is clockwise. Its movement causes Lunar and Solar Eclipses.

When the Earth comes between the Sun and the Moon, the rays of the Sun are obstructed and the moon becomes dark. It does not look clear. 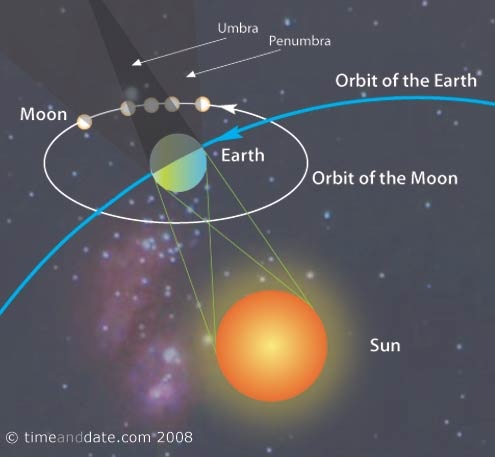 This condition is called "Lunar Eclipse".

This is called solar Eclipse.

A faint band of light across the sky is known as the milky way. If we look with the help of a telescope we will see hundreds of thousands of faint distant stars which appear like bright dust in the sky. 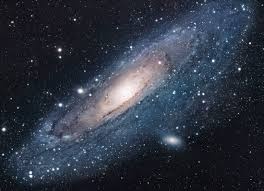