Along With the Gods: The Two Worlds (Korean Movie Review) 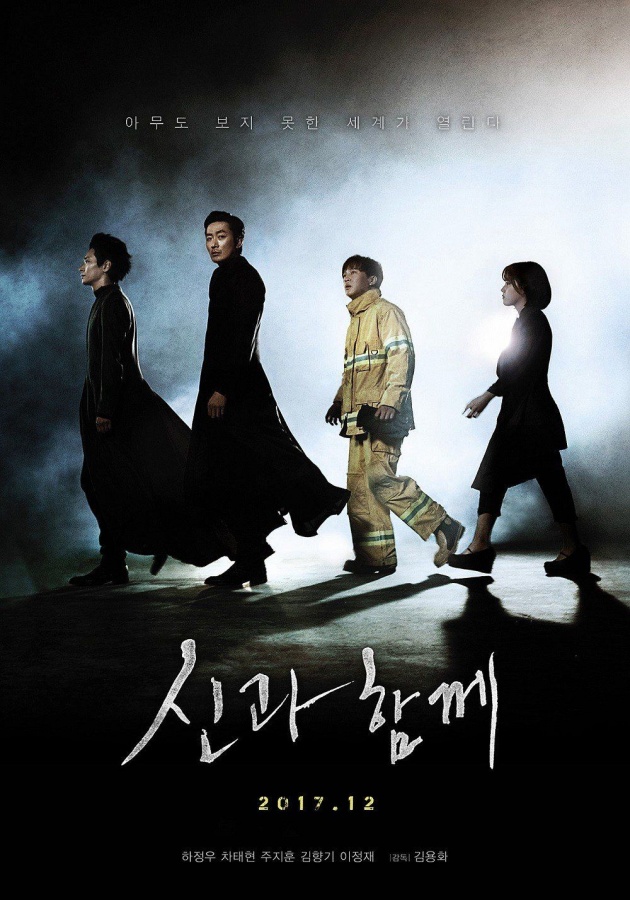 Along With The Gods: The Two Worlds Official Poster

When a person reaches the Afterlife, they are judged 7 times over the course of 49 days.
Tried by deceit, indolence, injustice, betrayal, violence, murder and filial impiety,
only the souls who pass all trials are reincarnated.

"Along With The Gods: The Two Worlds"

Along With The Gods: The Two Worlds (신과함께-죄와 벌)  is a  thrilling fantasy drama directed by Kim Yong-hwa and was released on December 20, 2017 in South Korea. The story was based on a web comic "Singwa Hamgge" by Joo Ho-min. It was revealed that the said movie will be divided into two parts, second part will be released in the summer this year entitled "Along With the Gods: The Last 49 Days".

Along With The Gods: The Two Worlds Full Trailer

The film was shown and well-known across the globe. Starting off in Asia, 10 countries bought the movie at the Asian Film Market, the countries are as follows: Philippines, Taiwan, Hong Kong, Macau, Singapore, Malaysia, Indonesia, Brunei, Cambodia, and Laos. In addition, it was sold to U.S and Canada as well. Further, at the American Film Market (AFM) this breakthrough movie was sold to additional 90 countries.

The story began when a fireman named Kim Ja-Hong  (Cha Tae-Hyun) died after saving a girl from a burning building. After his death, he is considered as an honorable paragon (a person with excellent virtues) and was escorted by three guardians, Gang-Rim (Ha Jung-Woo), Hae Won-Maek (Ju Ji-Hoon) and Duk-Choon (Kim Hyang-Gi) who will defend him in 7 trials of hell over 49 days. The guardians must justify that Ja-Hong is worthy to be reincarnated. Aside from that, it is a promise between King Yeomra (Lee Jung-Jae) and the three guardians that if they're able to reincarnate 49 souls over a century, they'll be reincarnated as with their own choice as well. During the trials, Mirror of Karma will reveal the deeds and charges of Ja-Hong and how he lived his life on earth, which made him bring to tears. The 7 gods of hell will give their final verdict whether Ja-Hong is guilty and be punished or innocent and pass to the next trial.

Gang-rim is the leader guardian of life after death. He reincarnated a total of 47 souls in 10 years. This grim reaper acquires power and a weapon in order to protect souls against the demons and ghouls. He is also a clever defender of Ja-Hong.

Kim Ja-Hong, the soul who will travel the seven hells of afterlife and will be guarded by the 3 guardians of souls. He lived his life working everyday to provide money for his ill mother and malnourished younger brother. A dedicated firefighter and a loving son and brother, deserves to be a paragon. However there are still charges he must succeed in trials as he faces the seven gods in order to be reincarnated.

Security Specialist Deputy Guardian, Haewonmak adds different image of the grim reapers. He is a little funny guardian and not so intelligent when it comes to trials. Still, he do his best to defend Ja-Hong at all cost.

Assistant guardian Lee Deok-choon has a special power, that is scanning all charges of the soul in order for them to defend the soul better during trials. She basically reports all accusations of Ja-Hong to the other guardians. 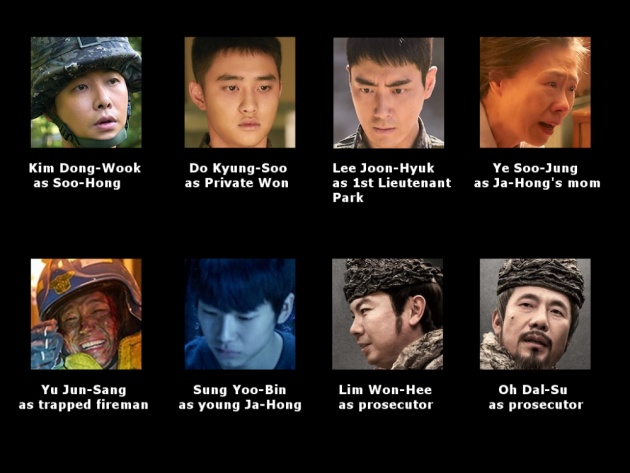 Other Characters in Along With The Gods: The Two Worlds

The cast lineup is obviously filled with the stars. All the chosen actors are some of the biggest names in Korean film industry. Few of them are also considered as A-Listers in korean wave. The acting shown by all stars are indeed outstanding. Meanwhile, the supporting actors and actresses suit the roles respectively. They're not the lead cast but those names are really huge in South Korea. It only proves that the production spent a lot of money and the writers handpicked such great casts.

The most exciting part for me, is meeting the different gods and their particular hells where they reveal how they punish the souls. Each trial happens in a distinct celestial realm. It is also the moment where life lessons were taught.

The Seven Gods and Seven Hells of Afterlife 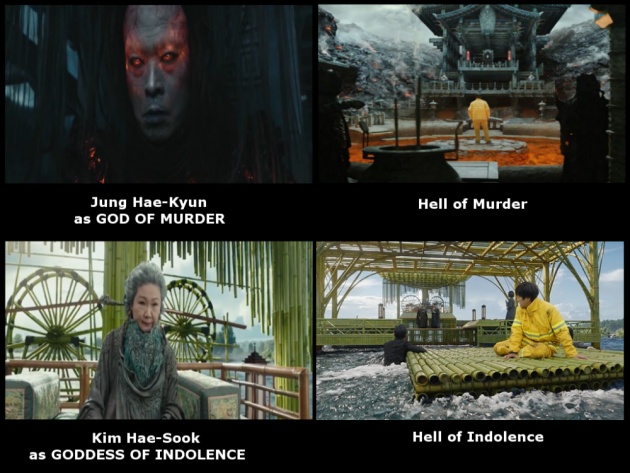 God of Murder and Goddess of Indolence with their respective hells.

God of Murder also considers indirect murders aside from direct killing. This god punishes souls by trapping them in the Volcano of the Damned.

If your past actions influenced someone's death, that is enough to cause a charged. Don't post mean comments online hastily. It's all recorded.

The Goddess of Indolence is easy to please but as well easy to annoy. She punishes the souls wasting away a noble life given with endless idling and negligence. She also hates souls who worship money for own interest. The goddess of indolence hell penalizes souls by rolling a gigantic rock over the souls and throwing them to the River of Indolence in which the scary fish will prey on them. 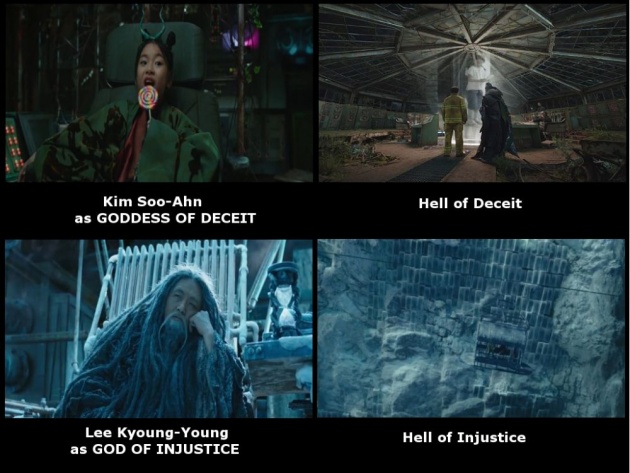 Goddess of Deceit and God of Injustice with their respective hells.

The Goddess of Deceit judges the lies one has said in life. The hell is sited in the Blade Forest, where the branches of the trees are razor sharp. She may look sweet and innocent but the Goddess of Deceit can cut the tongue of the soul as a penalty.

The God of Justice punishes those cold-hearted heart for refusing to help those in need. So, they're locked away in ice and will be situated at the Glacial Canyon. 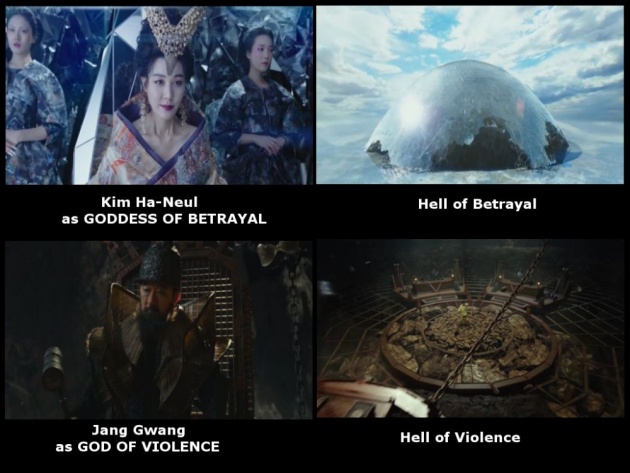 Goddess of Betrayal and God of Violence with their respective hells.

She is a beautiful goddess. Goddes of Betrayal only forgives selfess betrayal, righteous one, and betrayal of consience. Meanwhile, she punishes souls who betrayed faith, and they're locked away in a mirror and get destroyed. The Hell of Betrayal can be reached by passing through Heavenly Passage.

The Vacuum Sink Hole is the entrance to the Hell of Violence, the depth is depended on the defendant's crime. The God of Violence punishes the souls by sucking them inside the sink hole together with rocks that hit them as they spin. 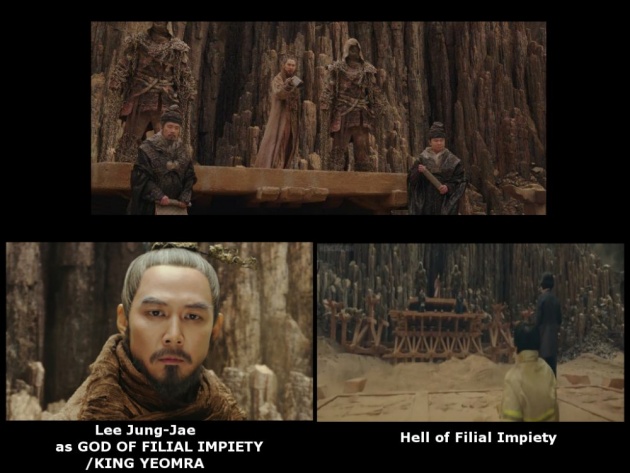 God of Filial Impiety is also known as King Yeomra. The supreme leader and the one who sets the the order of trials (from lightest to heaviest).

On it's day of release December 20, 2017, the movie already snatched 422,339 viewers with nearly US$2.9 million gross. After 54 hours of premiere, "Along with the Gods:The Two Worlds" broke the records set by "Ode to My Father" and "The Attorney" as it surpassed 1 million viewers with a total gross of US$9.3 million. On December 25, 2017 the film hit the 4 million in just 6 days after its premiere beating the records set by “Assassination”, “Avengers: Age of Ultron” and “Ode to My Father". On January 4, 2018, "Along With The Gods:The Two Worlds" exceeded 10 mllion viewers, in 16 days.

As of January 22, 2018 the film’s total number of viewers reached exactly 13,542,327 dethroning the "Veteran" on 3rd place as the the most viewed Korean film. It continued breaking records by records, and as of February 10, 2018,  "Along with the Gods: The Two Worlds" marked its 14,398,302 admissions and made it to the 2nd spot just behind "The Admiral: Roaring Currents", the current title holder of highest-grossing film in South Korea. 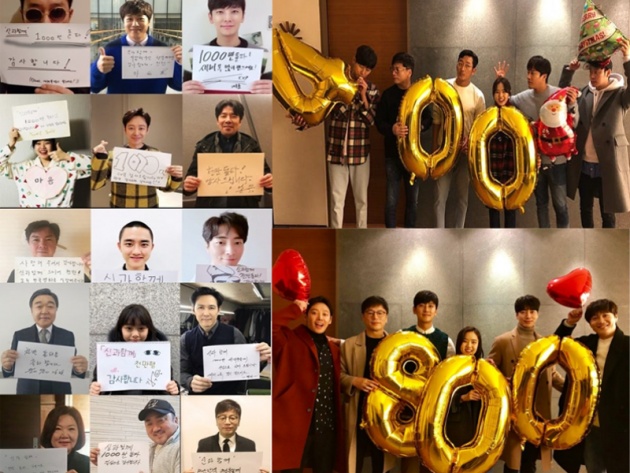 The cast of "Along With the Gods: The Two Worlds" shared photos celebrating for the 4, 8 and 10 million viewers.

I had read tons of news about this box office hit, "Along With The Gods:The Two Worlds" breaking records in a short span of time. Also, I almost attended the block screening of the movie in my country Philippines, but I failed to go. In that note, I already have a high expectation with this movie. The question now is, did it meet my expectations? The answer is ALMOST. However, it doesn't mean that it's not a great movie, it's just that maybe I expected too much. I want to be honest as possible with this review, so I would say I got dissapointed with some scenes. It was not clearly delivered what happened to some of the characters, especially with Kim Ja-Hong and 1st Lieutenant Park. I am just expecting something different and it's only my humble opinion.

Gang-rim battle with a vengeful spirit.

Now, let's go to the good side, the fact that it is a record-breaking movie, it only proves that there is something with it that many people noticed. For me, I noticed its uniqueness among Korean films I'd seen. The fantasy drama concept was highly achieved! The movie contains the hollywood movie feels but still has the Korean movie vibes. I thought it would be serious and thrilling throughout the end, but there are few funny scenes that added flavor to the movie. I was caught off guard as well and I cried hard when Kim Ja-Hong was in the last trial.

Behind The Scene of Along with the Gods:The Two Worlds

The CGI (Computer-generated imagery) effect is commendable and extraordinary. This is one of the main components of this movie why it became exceptional. The realistic setting of each hells and the representation of the gods in Afterlife is so creative and fascinating.The action scenes are intense as the two guardians battle various demons and ghouls with their magnificent powers and weapons.

Let's never ever waste new tears on the past.

-Kim Soo Hong, "Along With The Gods:The Two Worlds"

What I love the most is the moral lessons of the story. One should live life to the fullest holding the good values that one should acquire. Specifically, everyone must avoid the basic sins, BETRAYAL, VIOLENCE, FILIAL IMPIETY, MURDER, INDOLENCE, DECEIT and INJUSTICE. I believe whoever watches this movie will become a better person.

Before I end this blog, here's a querlo chat about movies for you..

That would be all, thanks for reading guys. I highly recommend this movie and excited to see the second part, I hope you can watch this movie during your spare time. 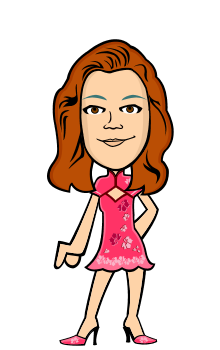 ☄ A Mediocre Blogger,
a Part Time Baker
and a Full Time Kpop FanGirl