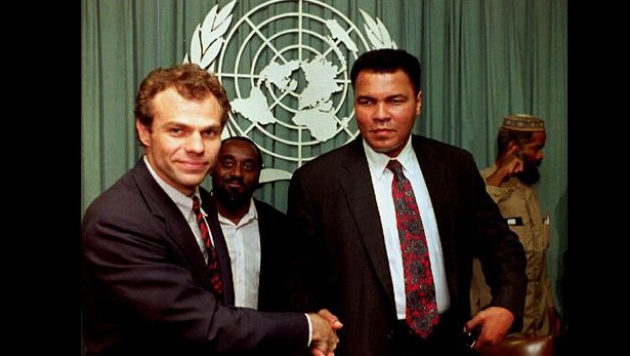 Ambassador Mo Sacirbey with Muhammad Ali at the UN

Film Annex is investing in Afghanistan's educational system by building Internet classrooms in primary, secondary, and high schools. All information and links are available here. In this interview, we talked to Ambassador Muhamed Sacirbey about the new Film Annex initiatives and his thoughts about Afghanistan's future.

M.S. Several generations of Afghanis now are deprived of a broader and deeper insight into both the world and their own country. Afghanistan was a progressive society before the Soviet invasion over 3 decades earlier. Occupation and then domination by the Taliban was a deliberate effort to control information and history – it is not so much about music or film or entertainment, but access to information and knowledge that empowers the people. This is where the Film Annex initiative is critical. It is inexpensive, but with an immense return on investment and freedom for Afghanistan and those involved. That is the unique consideration about knowledge and the most efficient way to deliver it – the Internet and connectivity.

M.S. The United Nations has undertaken a study regarding the effect of connectivity/internet and prosperity. The two are not only linked, but those countries that lack access to the technology and freedom of “connectivity” only lapse further. On the other hand, connectivity, the Internet promotes both economic well being but also more open and free societies.

M.S. Afghanistan’s resources are still meager even as it is a country wealthy in natural resources. It is also a big country, with several different ethnic/linguistic groups and very varied topography. The Internet not only evens that out, it is not only most efficient, but it is also least intrusive and most welcoming. The Internet undoubtedly is a threat to some who still think in the old ways of controlling people’s minds. Nonetheless, it is bigger then them and us. A computer is much more mobile than a missile launcher. It is easier to load than an AKA 47-. Most importantly, it is more effective against would-be manipulators than a trench, bunker or even an armor carrier. In fact, it is a weapon for spreading knowledge and prosperity and it does not need bullets but only connection.

M.S. We are always being sold something whenever we listen to radio or watch TV/film or surf the web. It may not be so obvious, but ideas are the most lasting product. Ironically, the Internet delivers both a more conscious consumer but also one more attractive to those who wish to market products or ideas. More advertising translates to more ideas and products, which then is monetized into a more informed but also more prosperous community. See Article, ”Connection Technologies Key to Sustainable Development.”  Education requires both schools but even more important is the books, or in this case access to texts and knowledge. The infrastructure, the knowledge and access to students are now ever more compatible.

M.S. Women/girls have been negatively impacted through denial of public roles, sexual stereotypes and even financial marginalization. My mother Aziza was a highly observant Muslim woman, but she was also a modern thinking women. She was educated at a Muslim madressa in Sarajevo that thought her science and math as well as Islam and her culture. She was liberated by education and in a way that Islam was not only consistent but also part of that liberation.

How religious leaders in Afghanistan evolve their view/position on women, education and the Internet will more impact their future role even more so than the future position of women. Knowledge is not only consistent, but it is a duty of all Muslims, including the women/girls. There is nothing inappropriate about touching the computer, but there is something highly anti-Islamic about denying both knowledge and free choice.

M.S. We need the internet/connectivity as much or more than the bricks and buildings. Building schools in Afghanistan is more about providing that access to knowledge and interaction as it is about the traditional schoolhouse. A classroom can be in a school, an office, an Internet café or a living room. It is also in a mosque.

M.S. We are all aware that globalization is a two-edged sword, but certainly there are no sharp minds and business initiatives without the broadest interaction globally. A poorer country faces risk of exploitation under any circumstance, but the Internet as pointed above is actually a great leveler of opportunity both in terms of economy and knowledge. It also will significantly steer away from potential exploitation to greater economic partnership and opportunity.

Predicting a time frame is tough. However, here again we come back to women/girls. Greater opportunity and engagement of all society (with emphasis on women/girls) in economic affairs actually translates to a more progressive income and business environment for all society. It is again one of the motives as to why the UN has launched this Initiative: UN Launches Women/Girls Tech Portal.

M.S. This is an equal partner to Film Annex’s AF (Afghanistan Development), but we only touch upon it briefly here. I can only voice what the veterans themselves emphasize: Coming back they need want hero-worship or sympathy – they most need sincere opportunity. Our patriotism our rhetorical thanks for their service neither feeds their families or opens doors to jobs and entrepreneurship. G.I.V.E. is well suited to the hard-working, initiative oriented of veterans.