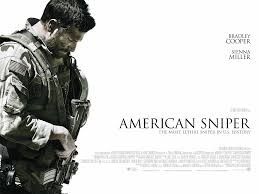 All gun guys and most Americans, except perhaps for a few off-the-grid survivalists shivering in a dugout somewhere west of Des Moines, already know that the American Sniper is based on the exploits of Chris Kyle, the “most deadly sniper in American military history.” The same people also know how Chris Kyle’s story ended prematurely and violently at a Chalk Mountain shooting range, where he was gunned down by a man he was trying to help even though they hardly knew each other. American Sniper focuses on the rest of Chris Kyle’s story, taking 132 minutes to demonstrate, very graphically at times, that Gen. Sherman had a knack for understatement . . . American Sniper

Be forewarned. Viewers who expect Director Clint Eastwood’s American Sniper to be a gung-ho war movie are going to be disappointed as they were on their first blind date. Yes, there’s plenty of action, and the ultimate firefight scene is particularly intense. But, as evidenced by “Flags of Our Fathers,” “Letters from Iwo Jima” and even “Gran Torino,” lately Eastwood is far more interested in depicting the effect of war on fighters than he is about glorifying the effect of fighters on war. Kyle’s battles in Ramadi and Sadr City only set the stage for the bigger battle in his mind and spirit. 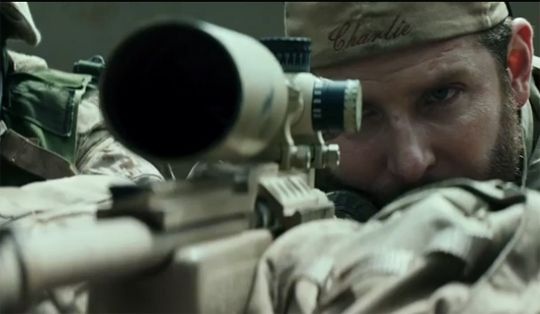 Likewise, any previous expectations that this film would be a well-researched factual retelling of Kyle’s story were wildly misplaced. American Sniper is a work of fiction “based on” Kyle’s life, with many key scenes and plot devices being completely invented by a writer with more imagination than talent. Because war isn’t exciting enough for a silly auteur who has never been in one, and Hollywood never lets the truth get in the way of product placement or selling an extra matinee ticket.

Thanks to the writer (Oscar nominated!), the errors in American Sniper are more numerous than Chris Kyle’s confirmed kills. The anti-insurgency tactics represented in the movie are often dangerously wrong, with Marines spending more time pointing rifles at each other when entering a room than scanning it. The “Enemy at the Gates”-like duel to the death between Kyle and an enemy super-duper-delux-sniper called “Mustafa” – not to be confused with the fat waiter in Ratatouille – never happened in real life. It’s as phony as any Brian Williams tale of terror.

Kyle was not 30, the “old man” as claimed in this film, when he took his BUD/S training. Kyle did not call his wife during the heat of an intense firefight while his guys were getting blasted by all the militants on two continents. Kyle did not enlist because of 9/11; he claimed that he always wanted to be in the military and joined after too many rodeo broncs busted him instead of the other way around. The list goes on and on.

American Sniper has proven to be controversial in other ways as well. Pernicious horsefly Michael Moore, the under-talented and overstuffed Seth Rogen and the eternally smug and bitchy Bill Maher have all had their shots at Eastwood and Kyle. Their comments, like the general braying by jackasses on the hard left and the hand-wringing of metrosexual tools, are uninteresting. In fact, they are only worth mentioning because they illustrate the depths to which Beta males will sink in order to trash men with an Alpha image – especially when one of the Alphas is 84 and the other is conveniently dead.

Much has been made of Kyle referring to enemy insurgents as “savages.” I suppose he should have called them “good chaps” or something nicer, but I imagine that the savages had a few harsh words for Kyle, too. That’s war. It seems that people who want to complain about all the killing and stuff in this movie would probably find “Fifty Shades of Grey” more to their taste.