The pre-release post-screening Question and Answer session is something of a common occurrence for cinemagoers living in London. While you won’t get a chance to be ‘up close and personal’ with a major star – their public relations advisors generally limit the scope of questions, not to mention physical contact – you might get a chance to quiz an up-and-coming or even established independent film producer or director. A case in point is David Gordon Green, the award-winning helmsman of GEORGE WASHINGTON, ALL THE REAL GIRLS, UNDERTOW and PRINCE AVALANCHE, plus some films you might have seen in your local multiplex, PINEAPPLE EXPRESS, YOUR HIGHNESS and THE SITTER. Texas based Green is an independent director who happens to have made some Hollywood comedies of varying degrees of quality (I bailed on YOUR HIGHNESS, but PINEAPPLE EXPRESS is held in high regard by people who like Seth Rogen drug-related action movie fair, featuring the Franco, James not the General). He was in town to bat for JOE, his adaptation of a Larry Brown novel about an impressionable fifteen year old boy, Gary (Tye Sheridan) in need of a father figure who gets one in the form of ex-convict Joe (Nicolas Cage).

While I wasn’t sitting at the back at the Curzon Soho, Shaftesbury Avenue, London, taking notes, I did manage to glean some insights into the working methods and philosophy of young Davey Green.

Nic is really dedicated. He came out with Green two months before shooting began to help scout locations. He was happy to drink in local bars and share his wisdom. In one bar, he attracted the attention of some unfazed, ‘couldn’t give a shit’ locals. One by one, the curious and quietly impressed came up to him and delivered curt appraisals of his back catalogue. ‘I loved BANGKOK DANGEROUS.’ ‘CON AIR was great.’ There was one guy, tough looking, stand-offish. He eased up to Nic as he was about to leave. ‘I haven’t told anyone this,’ he explained, ‘I love CAPTAIN CORELLI’S MANDOLIN.’

Nic is happy to improvise and to suggest ideas. One of them didn’t really fit with the movie. ‘I want to be Joe sitting naked, playing the flute.’ ‘I can shoot it, no problem, but I won’t be in the film.’ Nic takes a beat. ‘Let’s not then!’

Nic and Tye Sheridan bonded quickly. He was also happy to improvise with the late Gary ‘Ozzy’ Poulter, who plays Gary’s abusive alcoholic father Wade. They have a mutual liking for metal (music that is). Green was happy to film their conversations – improvisation is his thing – but only one of them ended in the film.

For Green, it’s great to work with no professional actors, they give the film authenticity. Generally, Green does not give them dialogue but allows them to say what needs to be said in their own words. He is not rigidly bound to ‘marks’ (places where the actor must stand to remain in focus) either.

Generally, on low budget films, Green does not have to negotiate the use of an individual with minimal acting experience. If it doesn’t work out, he can edit them out. He picks some no-professionals he has seen in other movies, for example, Kay Epperson, whom he saw in Richard Linklater’s BERNIE. (‘She stole that film’ as one of the interviewees talking about the murder case.) Green is less keen on actors unwilling to improvise; he has even worked with the same (unnamed) reluctant actor more than once.

Gary was ‘an amazing guy’ with problems that he sought to address whilst making the film. At the end of shooting, Green offered him a set of false teeth, so he could improve his eating. ‘Either you can have a pair tomorrow [for the wrap party] that you can use to eat soft stuff. Or wait a couple of days and I’ll get you a pair that you can use to bite into an apple.’ Gary chose the former. He wanted to look good for the wrap party. Simple as.

Green does not regret his Hollywood comedy trilogy. He likes making films that make people laugh with their friends, then go off for a pizza. Green won’t always fight to kick out a gag he doesn’t like (very telling) but he is proud of what those films allowed him to achieve i.e. a return to independent filmmaking with experience of Hollywood stars.

PRINCE AVALANCHE – to Green, anyway. The Germans went for it! (As opposed to PINEAPPLE EXPRESS which they didn’t.)

Green has just wrapped MANGLEHORN another indie film with Al Pacino. He has RED OAKS, a series pilot for Steven Soderbergh in the offing. 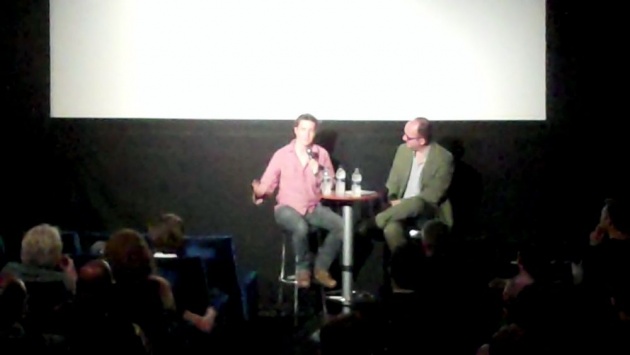