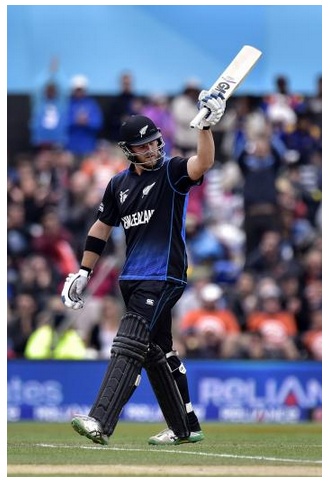 New Zealand made the perfect start to the World Cup when a swashbuckling Brendon McCullum led his side to a 98-run win over Sri Lanka at Hagley Oval in Christchurch Saturday.

McCullum's quickfire 65 set New Zealand up for an imposing 331-6, with Kane Williamson adding 57 in the middle of the innings and Corey Anderson blasting 75 off 46 at the tail.

Sri Lanka made a steady start in reply and were 124-1 in the 22nd over, setting themselves up for a big finish.

But on a grey Christchurch day, where the temperature hovered around 13 degrees Celsius, they were soon to feel the heat as New Zealand mounted a triple strike and they were all out for 233 with nearly four overs remaining.

In the space of 12 balls Trent Boult and Daniel Vettori combined to take three wickets for five runs to reduce Sri Lanka to 129-4.

Premier batsmen Lahiru Thirimanne (65), Kumar Sangakkara (39) and Mahela Jayawardene (0) were back in the hutch as the batting collapse, a familiar part of Sri Lanka's pre World Cup performances, reappeared.

Sangakkara had the consolation of passing former Australian captain Ricky Ponting as the second highest run-maker in one-day international history.

Adam Milne then removed Dimuth Karunaratne (14) and Jeevan Mendis (4) to have Sri Lanka at 168-6, facing a run rate of nearly 10, and New Zealand firmly in command.

New Zealand's dominance underscored their rising status as serious contenders in a tournament where they have never previously gone further than the semi-finals.

In heavily overcast conditions and with a little drizzle in the air that delayed the start by a few minutes, Sri Lanka won the toss and put New Zealand into bat in conditions ripe for swing bowling.

But it was the New Zealand batsmen who took control with McCullum setting the tournament alight in a 111-run opening partnership off 95 deliveries with Martin Guptill.

McCullum, at his destructive best in a 49-ball stay, smacked one six and 10 fours, including three boundaries off the first four balls he faced, to the delight of the partisan New Zealand crowd.

He was particularly harsh on Sri Lanka's bowling ace Lasith Malinga who was quickly removed from the attack when McCullum peppered the boundary for a lusty 22 off his fourth over.

McCullum, Guptill (49) and Williamson led New Zealand to 183-2 in the 34th over when Mendis dismissed Williamson and Ross Taylor in consecutive balls.

But any hopes Sri Lanka had that the tide was turning were quickly dashed with the arrival of Anderson at the crease and the former holder of the fastest ODI century record mercilessly launched into the bowling.

Mendis took two wickets for five for Sri Lanka, but only bowled two overs while Suranga Lakmal took two for 62 off 10.

Tillakaratne Dilshan and Thirimanne put on 67 for the first wicket in Sri Lanka's reply before being parted by Vettori.

The 36-year-old, who relies more on guile than spin, baffled Dilshan on 24 with a subtle change of pace and was rewarded with a simple return catch.

Thirimanne and Sangakkara added 57 for the second wicket before the innings fell apart.