"I think the more you blog and tweet about your stuff, the more revenue you get. My best days seem to come after a blog post or update about some of my film projects." - Anderson West

Anderson West is a graduate from Staffordshire University in the UK, as several of our most talented filmmakers. He recently joined Fuzzy Duck Creative, a film and advertising studio, where he gets to work along other fellow Film Annex'ers. His motto: shoot what you know and dream big. Because he's an active member with great movies, regular blog posts and online promotion skills, he's also part of Eren's Picks.

Below is an interview of Anderson about promoting on social media, why he thinks Twitter is more efficient for filmmakers today and some tips on online film distribution and strategies for social media.

Film Annex: When did you start promoting your work specifically on social media platforms?
Anderson West: Even though I didn't realize it, I started promoting my films with social media back when I was in University. Even though I felt updating my Facebook status about when I finished my script or when I was filming was just a given, it got some attention towards my films/work. Even though at the time my social media circle wasn't very large (i.e. just childhood and university friends), it was still attention towards my work that it otherwise wouldn't have had. It's interesting how social media is really just an enhanced/easier way to get good "word of mouth". I remember posting a status when I was premiering one of my documentary films (Who I am), at my local church on Facebook. I was surprised at how many people actually showed up. In fact, people who I didn't even know turned up. So really social media has always been integral to my film promoting.

FA: What social media platforms do you use? Which one(s) do you think is more efficient for filmmakers to use to promote their work and why?
AW: Personally, I think Twitter is the most effective medium at the moment. Facebook is great when you want to reach out to your friends and people in your social circle but when you want to reach a wider audience, for me Twitter is far more effective. All it takes is for a tweet to get to the right person who likes it and then retweets it. One simple retweet could equal 1 million views on your work. And ask yourself this question, are you more likely to click on someone's Facebook fan page or if your celebrity hero retweets a quirky website/video that they like? People want to see what their favorite celebrity likes and Twitter brings the fan closer to the artist.

FA: Did you make interesting contacts or create business opportunities by sharing your work on social media?
AW: In ways yes. It's nice to get requests to do music videos from people who have seen your work posted on Facebook or Twitter and you can definitely get the work if you push for it. It's just another way of getting your portfolio out there. At the moment, I wouldn't say "business opportunities", more networking ones, however I guess anything that leads to getting more work is a business opportunity.

FA: Give us an example on how you promote your Web TV or work in general on social media?
AW: Twitter. Whether it's linking people to a new blog post or just saying have a watch of my Web TV, people seem to be more receptive to my Twitter activity. People just want to see content, whether it's a decent article or a poem, video, blog post, whatever it may be, people just want to see something new and fresh. After all, people flock to Twitter to see each others' opinions, so why not see the film/creative content they like. 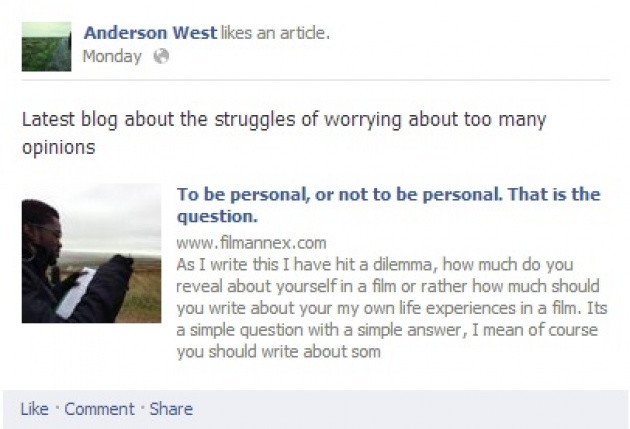 FA: Did you see a change on your revenues on Film Annex after promoting your Web TV on social media?
AW: Yes definitely, if you put the work in, you definitely see the benefit. Personally, I think the more you blog and tweet about your stuff, the more revenue you get. My best days seem to come after a blog post or update about some of my film projects. But tweet your stuff, Tumblr, Google plus, Facebook, whatever avenue you have, do it. Just be careful not to spam.

FA: Do you have any tips for other filmmakers on how to promote your films on social media?
AW: Just let people know as much about your films as possible, Whether it be behind the scenes, or postmortems, or just deleted scenes, if you got it, show people, that's the stuff they want to see. DVD's destroyed VHS's for many reasons, but one of the main ones was that people could see alternative cuts, behind the scenes and even director's commentaries. People want to know the mind behind the filmmaker, so give them a little piece of it. Personally, I have one or two Director's commentaries coming up that I feel people may be interested in, so watch this space.

Below is a video message from Anderson West and Mark Kuczewski where they both encourage young students to follow their dreams and document their lives: