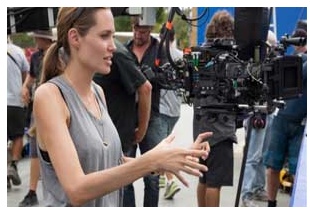 In a life that has been notable for its many metamorphoses — screen starlet, Goth vixen, United Nations ambassador, mother of six, breast cancer awareness advocate — Angelina Jolie's latest incarnation is as filmmaker. Rarely has an actor, particularly of Jolie's stature, so fully given over to the other side of the camera. On Thursday, she'll release her second directorial effort, the inspirational World War II survival tale "Unbroken," which follows her Bosnian War drama "In the Land of Blood and Honey." She has already shot her next movie (an intimate marriage drama in which she also co-stars with her husband, Brad Pitt), and made plans for her fourth film, "Africa," about elephant poaching. Meanwhile, she's virtually disappeared from the screen, starring in only one live-action film ("Maleficent") in the last four years.

The transformation is complete, even if the new title gives her some hesitation.

"I'm shy to call myself a director still. When someone says, 'What do you do for a living?' I don't know if I've earned that," Jolie said in a pair of recent interviews, one in a Manhattan hotel, the other by phone. "I do love directing. I much prefer it to acting."

It's admittedly unlikely that Jolie is beset by queries about her occupation ("And this Mr. Pitt, is he in show business as well?"). But if there were any doubt, the scope of "Unbroken" — a classical epic that spans war and sea, a prestige picture with major below-the-line talent, a Christmas Day release amid awards season — certainly makes clear Jolie's ambition.

"If you would have said to me a few years ago, 'What kind of film are you looking for?' I would have never said a film with shark attacks and bombing raids and the Olympics," says Jolie. "I would have picked something very intimate and character driven. But I fell in love with this story."

The story is of Louis Zamperini, who before enlisting in the Air Force to fight in World War II was a track star who ran in the 1936 Olympics in Berlin. During the war, his B-24 bomber crashed in the Pacific. He and two crewmates survived on a raft at sea for 47 days, only to be captured by the Japanese and put into a brutal prisoner-of-war camp.

Zamperini's incredible life was chronicled in a 2010 best-seller by Laura Hillenbrand, though his tale had been kicking around in Hollywood since 1956, when Universal Pictures bought the rights to Zamperini's memoir with plans for Tony Curtis to star in the film.

"If it was a hot property, I wouldn't have had a chance, to be honest," says Jolie, who had to convince Universal that she could handle a much larger project than the independent "In the Land of Blood and Honey." But she was deeply moved by the script (later to be rewritten by the Coen brothers) and Hillenbrand's book.

"It wasn't that I believed I was the most skilled director," she says. "It was that I just really, really cared."

Colleagues of Jolie's bear that out, calling the film a deeply personal one for the 39-year-old.

"Obviously, she doesn't know as much about the technical aspects of filmmaking as some people like Joel and Ethan (Coen) do, but she learns very quickly and she's so passionate about it all," says cinematography Roger Deakins, the Coens' usual director of photography, who's also slated to shoot "Africa."

"We spent a lot of time in prep and a lot of time considering what we wanted from a sequence," says Deakins, who said a touchstone for Jolie was Sidney Lumet's "The Hill." ''But on the day, on the set, it was a very instinctive way of working, which I found quite stimulating."

The young British actor Jack O'Connell, who plays Zamperini, wasn't the studio's preferred choice, but Jolie fought for him.

"Undoubtedly, in terms of the movie industry's perspective on it, there were certain boxes that hadn't been ticked," says O'Connell. "But I think that's a credit to Angelina. She just wanted the best actors for the roles and wanted to make the best movie possible, as opposed to entertaining business agendas."

"Unbroken" has put Jolie into the awards season mix, though the film was conspicuously absent from the Golden Globes nominations. But the most important response from "Unbroken" — which Jolie calls "the hardest thing I've ever done creatively" — was Zamperini.

Before he died in July at age 97, he and Jolie — who lived just around the corner from each other in Los Angeles — became close friends. Jolie screened the film for Zamperini on his deathbed, and she vividly recalls "those beautiful blue eyes" seeing his life's story, revisiting memories and family Zamperini knew, she says, he'd soon be reunited with.

"I didn't anticipate when I signed on to do it what an impact this man would have on my life and how much this story and the messages would hit home with me and my family and change me," says Jolie. "He did change me. He had a huge impact on me. I didn't grow up with a dad in the house and my grandparents passed away when I was young. I didn't realize how much I needed that older, wiser compassionate friend to help give me that guidance and support."AP