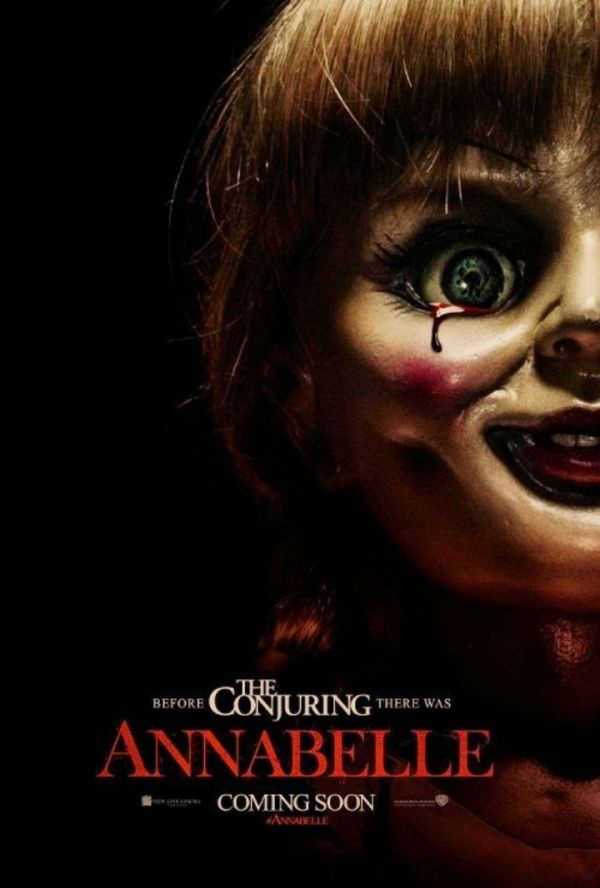 The most shocking thing about Annabelle, the haunted doll prequel to The Conjuring, is that a major Hollywood studio is releasing it. The film looks to have cost about 200 bucks and is agonizingly short on incident, character or reason to exist.

It opens well enough; a young couple is expecting their first child and living in the suburbs when a Manson-like murder happens next door. The killer cultists make their way into their home and are capped by the cops, but not before one of them scrawls a bloody sigil in the nursery, pre-stocked with all manner of creepy dolls.

That location was probably too expensive, so the couple immediately move to an apartment building and promptly become pretty much the only characters in the movie… except, of course, for a spiritually inclined black woman who will become important as supernatural shenanigans overtake the family. In case you didn’t already guess, one of those spooky dolls was Annabelle, and that bloody home invasion was her origin story.

Once in the new building, possibly chosen as an homage to Rosemary’s Baby, odd stuff starts happening, but it’s all directed with such slackness by John Leonetti that it’s impossible to get worked up, creeped out or even mildly interested. There’s one diverting scene where the young mother, Mia (yeah, Rosemary’s Baby. By the way, the actress’ name happens to be Annabelle Wallis) is menaced in a basement storage unit by a very James Wan-ian demon, but that’s about all the scares Annabelle has to offer.

The movie’s threadbare frights make the entire second half - when it’s largely Mia home alone with the doll and a baby - interminable. There’s some fun to be had wondering why Alfre Woodard would take a role like this, which ends in a really racially uncomfortable place, but nothing else about what she does is particularly good. As the movie plods to its denouement things go from boring to silly, especially as the Annabelle doll levitates a few feet off the ground. Scary dolls immediately become not scary as soon as they're in action - they can only do stuff offscreen.

As a short film Annabelle might have worked; there’s about 20 minutes of material in this entire movie. As a feature it’s a drag, especially since the low budget means the film is reduced to minimal locations and about four characters. A bigger cast getting knocked off or being otherwise involved in the haunting might have been fun, or a tighter focus on a less familiar story (new mom is going crazy/being haunted!) could have elevated the dreck.

By the end of the film Annabelle the doll has been robbed of all menace, and has become almost clownish. This is a perfect example of the modern trend of over-explaining things, of focusing too much on elements that work because they’re small or in passing. The power of Annabelle was her brief, mysterious role in The Conjuring; in that film she’s a secondary scare generator. When everything is resting on her stuffed shoulders it all falls apart, especially in the context of a cheap-ass hyper-digital period piece where everybody looks like they're dressed for a Mad Men party.

Skip Annabelle, but watch it on Netflix and fast forward to the scene where the ghost throws books at a baby. That's about the best part of the whole film.