Today i am going to talk about the entry of PAT(Pakistan Awami Tehreek) back in elections for Parliment first time they lose the elections with great margin and left the paticipation in elections but now they announce again to take part in elections.

ISLAMABAD: Chief of Pakistan Awami Tehreek (PAT) Dr. Allama Tahir-ul-Qadri said on Thursday that his party will contest the next general elections as a political part.Tahir-ul-Qadri appreciated the participants of Inqilab March by saying that they have created the history. He said Inqilab March has spread awareness among masses. It gives people courage to raise voice for their rights and to take stand against the corrupt leaders, he added.. 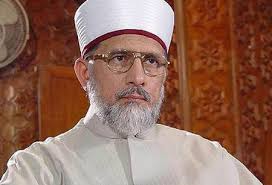 While addressing to the participants of ‘Inqilab March’ in Islamabad, Dr. Qadri said the desired change can only be brought through parliament. He said PAT

will restore the decorum of parliament.

“PAT will emerge as the biggest political party of the country”, he claimed.

PAT Chief said that his party will nominate election candidates from every corner of the country.

” Those meeting the required standards will be issued PAT ticket to contest in the polls”, he added.

Lets see what will happen to the PAT under leadership of Thir-ul-Qadri in future.